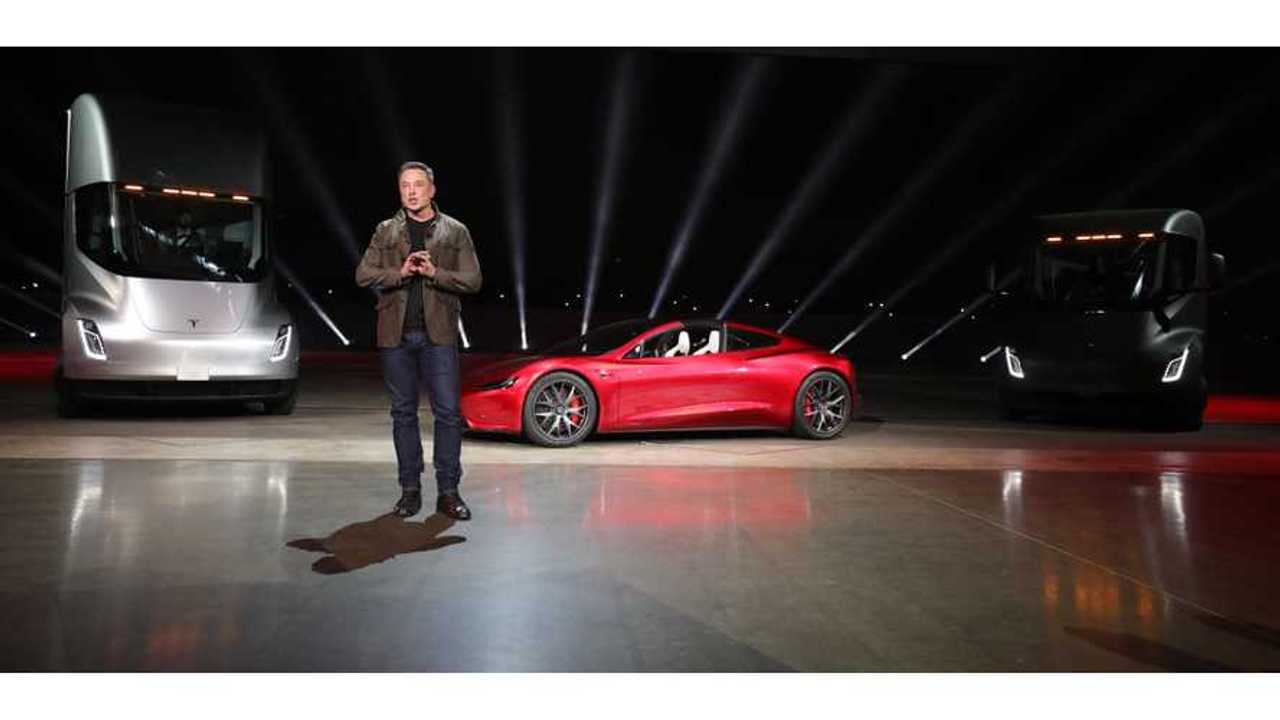 What was supposed to be an event which launched the Tesla Semi Truck turned into Elon Musk doubling down with another shocker. That surprise turned out to be a much-anticipated "maximum plaid" Tesla Roadster. The specs on both of these vehicles were jaw-dropping. But, before we get into that — let's acknowledge what Musk set out to do last night... in his own words: "give the hardcore smackdown to gasoline cars."

The Guardian reports, "While the sports car provided a jolt of excitement for Tesla enthusiasts, much of the event focused on pitching the truck to truck drivers... Musk claimed it would be 'economic suicide' to continue using diesel trucks, saying the Tesla version, if driven in convoy, would be cheaper than shipping goods by rail." And, explaining the Roadster's lightning-fast performance, Musk remarked, "Driving a gasoline sports car is going to feel like a steam engine with a side of quiche.”

Above: Check out a quick recap of last night's Tesla launch event highlights in just nine minutes (Youtube: The Verge)

Let's start with the biggest surprise of the night, the Tesla Roadster. According to Teslarati, "The Next Gen Roadster will accelerate from 0-60mph in a vertigo-inducing 1.9 seconds and 1/4 mile in 8.9 seconds. By comparison, supercar exotics like the Bugatti Veyron, Porsche 918 Spyder and McLaren 720s tip the 1/4 mile scales at just shy of 10 seconds." Tesla CEO Elon Musk reminded the crowd, “These are all world records.”

How about range? "Capable of traveling 620 miles of range per single charge, nearly 1,000 kilometers, the Roadster’s 200 kWh battery pack will be the company’s largest yet and double the battery capacity of its current flagship P100D and 100D vehicles. Musk noted during his presentation that the Next Gen Roadster will be able to drive from San Francisco to Los Angeles, and back, without needing to stop and charge."

Above: A look at the Tesla Roadster (Source: Tesla)

The Tesla Truck was equally groundbreaking. As reported in Teslarati, "The Tesla Semi can accelerate from 0-60 in 5 seconds, without cargo, and 20 seconds with a full 80,000 lb. load, more than twice as quick as a traditional diesel truck." Get this — it's .36 drag coefficient beats a Bugatti! The Semi even has thermonuclear resistant glass and a frunk. It's reported that, "the semi will cost 20% less per mile compared to Diesel trucks, costing $1.26/mile versus $1.51/mile." Musk also unveiled an electric pickup truck which would... gulp, carry another pickup truck (see below).

Above: Still from Tesla presentation of the consumer-facing "beast" of a pickup truck that can carry another pickup truck (Image: Tesla)

Back to the Semi, what about its range? It turns out, Tesla's Semi has a driving range of 500 miles. And, "Tesla Semi can charge 400 miles in 30 minutes," whereas a diesel takes 15 minutes to refuel. Charging occurs at Tesla's "Megachargers run on solar power and Tesla has guaranteed electricity rates of $0.07 per kWh with Semi owners." Furthermore, "Musk noted that the semi-truck is expected to save operators $200K on fuel alone over 1 million miles."

Above: A look at the new Tesla Semi Truck (Image: Tesla)