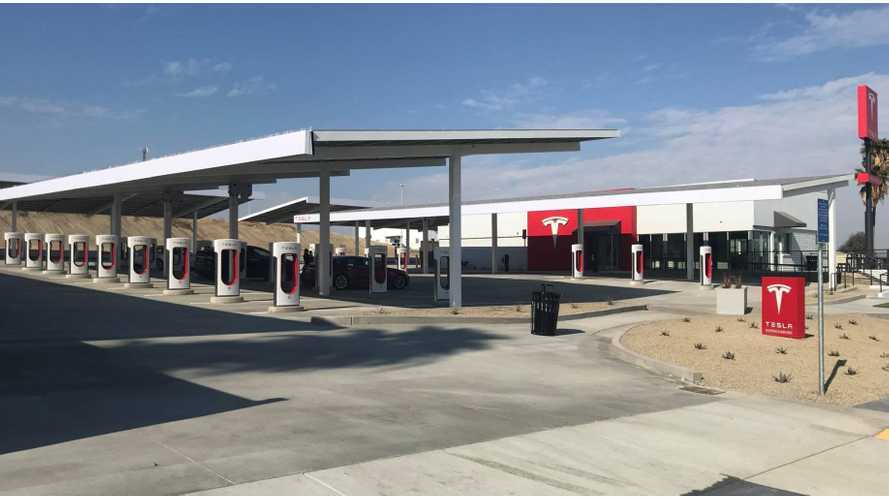 Tesla has just opened two new Supercharger stations, which are now the largest in the U.S., but that's not the only reason they're so special.

We previously reported that the automaker has been in the process of building new 40-stall Supercharger stations in select locations. Though these don't live up to the size of some stations overseas, there's a whole lot more that sets them apart from Tesla's traditional stations.

Update: Video of station added below (hat tip to SparkEV)

One of the new stations is located in Kettleman City, California, which is conveniently halfway between Los Angeles and San Francisco. The second station in Baker, CA splits the distance between Los Angeles with Las Vegas. These are some of the most popular routes in the area and have been in need of Superchargers.

According to Teslarati, an automaker rep shared that the new stations feature a lounge with food, beverages, and refreshments. There's also a kid's play area with a climbing wall and an outdoor space for families with a pet relief area. To make the new stations even better, the automaker is providing 24/7 access to the lounge area for Tesla owners via a building access code that will appear on their in-car display.

Additionally, the new stations have a store with Tesla-branded clothing and other items. Inside the store, interactive kiosks help to inform people about the company's energy products. The stations also have solar canopies, as well as Tesla Powerpacks.