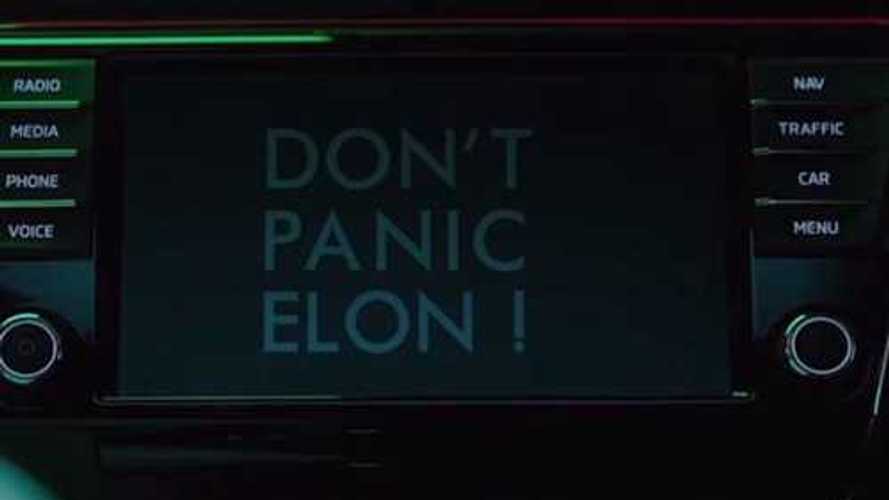 Elon Musk, eat your heart out!

While Elon Musk’s own first-generation Tesla Roadster won’t quite make it to the Red Planet, Skoda has successfully sent its flagship Superb model in the punchy 280-horsepower Sporstline specification to Mars. Without making a big fuss about it, the Czech marque part of the Volkswagen Group empire has released video footage on YouTube to demonstrate the red-hot Superb was actually on a mission to Mars.

After checking the rearview mirror and the car’s Adaptive Frontlight System (AFS), the driver fires up the four-cylinder 2.0 TSI gasoline engine as well as the infotainment system displaying “Don’t Panic Elon!” on the touchscreen. He then embarks on a journey to Mars… as in the tiny commune located in the Loire department in central France. After tackling the traffic at speeds of a little over 62 miles per hour (100 kilometers) per hour (not quite as fast as the Tesla Roadster, eh?), he arrives at the destination.

He is greeted by dozens of people part of a very small community taking into account only several hundred people are currently living in Mars, as per the trusty Wikipedia. After shaking hands, hugging kids, and taking photos, our hero walks away and bounces on the road as if he were in outer space. After all, he is on Mars where the gravity is much lower compared to what we have here on Earth, right?

The video is chock-full of references and goes to show automakers do have a sense of humor from time to time. We honestly weren’t expecting such a video to come from Skoda, but we are pleasantly surprised by the initiative. Skoda and Tesla have virtually nothing in common, yet there’s now a connection between the two. The Superb and original Roadster were tasked to reach Mars, both a small place on Earth not a lot of people have heard of and also the fourth planet from the Sun.