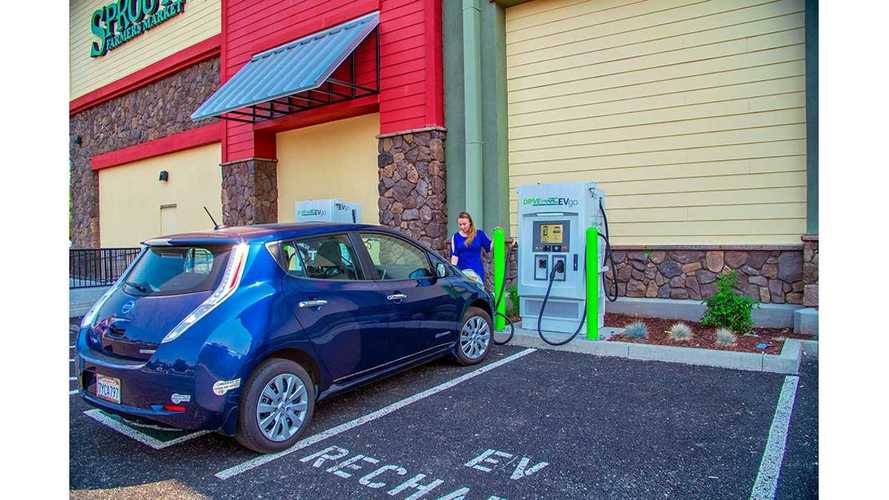 The DRIVEtheARC corridor of fast charging stations in Northern California is up and running.

There are 55 fast chargers, installed at 25 locations between Monterey and Lake Tahoe.

The project, announced 12 months ago, is funded by the New Energy and Industrial Technology Development Organization (NEDO) (Japan’s largest public R&D management organization) and until further notice charging is free.

The dual-head 50 kW chargers (CHAdeMO and J1772 Combo) have now been added to the EVgo charging network (950+ total).

According to DRIVEtheARC, chargers were installed at key high-traffic retail partners along the route to create a true inter-city charging network.

From Monterey to Lake Tahoe, 55 New EV Fast Chargers Have Been Installed at 25 Locations

Sacramento, Calif. –  DRIVEtheARC, a corridor of electric vehicle (EV) fast charging stations spanning from Monterey to Lake Tahoe, today announced the completion of the chargers’ deployment and its official grand opening on the one year anniversary of the projects official launch. A collaborative effort between the New Energy and Industrial Technology Development Organization (NEDO) (Japan’s largest public R&D management organization), and the State of California’s Governor’s Office of Business and Economic Development, in partnership with Nissan Motor Co., Nissan North America, Kanematsu and EVgo, DRIVEtheARC encourages longer and more frequent trips with EVs by increasing the ease of long distance travel along one of California’s most frequented travel routes. As an integrated, international cooperation, NEDO is funding the DRIVEtheARC corridor as part of its mission to improve energy conservation and promote new energy technologies, as well to help facilitate government relations and research and information exchange between the U.S. and Japan.

DRIVEtheARC has also announced the start of a real-time SOC data link service with NissanConnect via the DRIVEtheARC smartphone app. The app will also provide more accurate range advice, and users will be able to select a recommended station based on the cruising range and charger availability data. By the end of 2018, the app will include trip planning and voice recognition features. The app was created in partnership with Kanematsu, a global trading house with expertise in electronics and information technology. Driving statistics will allow Nissan, Kanematsu, EVgo and NEDO to analyze and measure charger use patterns to support future EV charging projects globally.

“At Nissan, our goal is to increase widespread EV use so that we can benefit the environment on global basis; the opening of the DRIVEtheARC corridor represents a big milestone for the further adoption of EVs,” said Hitoshi Kawaguchi, Chief Sustainability Officer of Nissan Motor. “A robust public EV charging network is a key factor for stimulating further EV utilization and eventual EV market expansion. We are delighted to be able to provide Northern California with a fast charging network that covers major points of interest for drivers.”

As the global leader in EV sales, Nissan partnered with DRIVEtheARC as part of its ‘Infrastructure for All’ strategy. Nissan has played a leading role in growing the number of EV fast charging stations in the U.S., allowing it to provide Nissan LEAF drivers with access to the largest metro area network of fast charging stations in the country. DRIVEtheARC enhances the existing EV infrastructure Nissan has supported as part of its ‘No Charge to Charge’ promotion by connecting the metropolitan areas of Monterey, the San Francisco Bay Area, Sacramento and Lake Tahoe.

As the project’s local partner, EVgo managed the installation of the DRIVEtheARC infrastructure with the deployment of 55 EV fast charging stations at 25 convenient locations. Fast charging stations were installed at key high-traffic retail partners along the route to create a true inter-city charging network. EVgo now operates 950 fast chargers in over 600 locations nationwide, covering metropolitan areas where 90 percent of new electric cars are sold.

“After months of hard work, we are thrilled to announce the grand opening of DRIVEtheARC,” said Terry O’Day, Vice President, Product Strategy and Market Development at EVgo. “The corridor provides drivers with the charging infrastructure needed to go from surf to ski in Northern California. We hope the opening of DRIVEtheARC will pave the way for future EV integration in the state and continue to encourage EV drivers to travel farther distances, without the stress of finding somewhere to charge.”

For more information about the DRIVEtheARC project and app, please visit: www.drivethearc.com

* The service will be available to limited LEAF users due to the experimental nature of the project.