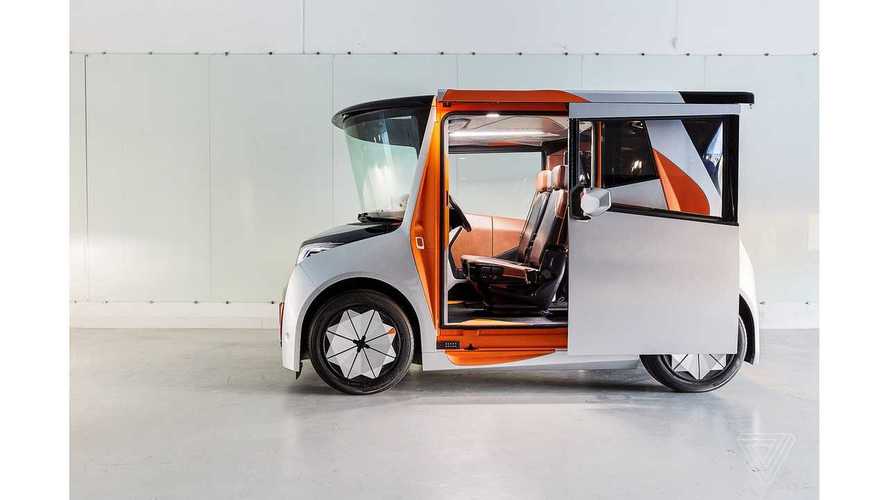 By: Domenick Yoney
What? This crazy looking box is a car? Why, yes it is.

Written out, "Revolutionary Electric Dream Space" is a long, odd name for a car, but it describes  REDS pretty well. It is revolutionary, at least in the sense that you've never seen a passenger vehicle quite like this one before. It is electric. And finally, it is a dream space: a place to spend time doing any number of things, besides driving.

It's easy to look at this unconventional city car and just write it off a some wacky flight of fancy that will never feel the grit of the streets beneath its tires, but despite making its world debut at the LA Auto Show, and notwithstanding its unique (some would say jarring) appearance, the folks behind the REDS EV insist it is not a concept car. Rather, it's the first part of a program that will eventually see the funky box find a place at home on Chinese city streets; an alpha prototype that will be put through two years of paces before mass production begins.

Now, you may be thinking, "Who would even think to design such an unconventional vehicle?" The answer is Chris Bangle, who, for 17 years was chief of design at BMW. Now he works for himself, and has teamed up with the China Hi-Tech Group Corporation (CHTC) whose car-manufacturing subsidiary Redspace will be responsible for producing the vehicle.

There aren't a lot of specifications available yet, but we are told it is 2.97 meters (9.74 feet) in length, not much bigger than the 2.69-meter (8.83-foot) Smart Fortwo. Yet, it seats four while underway, and five when stationary. While we don't have a figure for power output of the motor, we do know that the roof-mounted solar panels can provide as much as two kWh on a sunny day, energy that will be used to keep the air within the cabin clean, rather than motivate the vehicle.

We could go into great detail about how the inverted windshield design is, actually, more aerodynamic than it might strike the casual observer, or how the front seat swivels so the driver can face any other occupants in the car, but why not let Mr. Bangle himself expound on the whys and wherefores of this Project Redspace? He does a pretty good job of it in the video above.

While it's difficult to imagine REDS being a commercial hit, even in the cities it was explicitly designed for, we are living in a time when the unimaginable becomes reality on a pretty regular basis. And so, while it seems extremely unlikely the cartoon-like design would ever make its way to the shores of North America, your humble scribe stands ready to "register their interest."

A new concept of citycar designed for the Chinese market, REDS (Revolutionary Electric Dream Space) is an electric vehicle born from a collaboration between CHTC and the ex-BMW designer Chris Bangle.

The REDS resembles a Smart Fortwo in its dimensions (2,97 m in length) but the similarities end there, in fact it can accomodate up to five people when parked, four when on the go. From the start the idea was to focus on creating a full-time living space that could meet the needs of Chinese megacities, with traffic at a standstill 90% of the time.

The new citycar is equipped with many comforts, a small table descends form the ceiling, a retractable 17-inch screen and also a remote-controlled foot massager. To entertain 5 people the driver’s seat swivels 180 degrees around a folding steering wheel, allowing the passengers to get the most out of the available space.

The prototype has been manufactured in Turin, Italy, and also the solar panels installed on the roof of the vehicle are from Turin, they are produced by the Italian company Solbian. A solar plant made of the best SunPower ™ cells on the market, back contact mono crystalline silicon, with top efficiency and high aesthetic. A peak power of 332 W, spread on 4 panels, two of which have non-standard shapes, in order to follow the roof lines. A remarkable power that can provide up to 2 kWh of energy on a bright sunny day. Two separate MPPT charge controller channel the energy towards the batteries for a better efficiency in case of partial shadows and redundancy if any damage occurs. To further match the aesthetic and design of the vehicle,  the polymeric surface of the solar modules have been marked with a light mesh.

In the next two years the prototype will be thoroughly tested in view of starting the production, which will be carried out by REDSPACE, the CHTC's newly established car company.