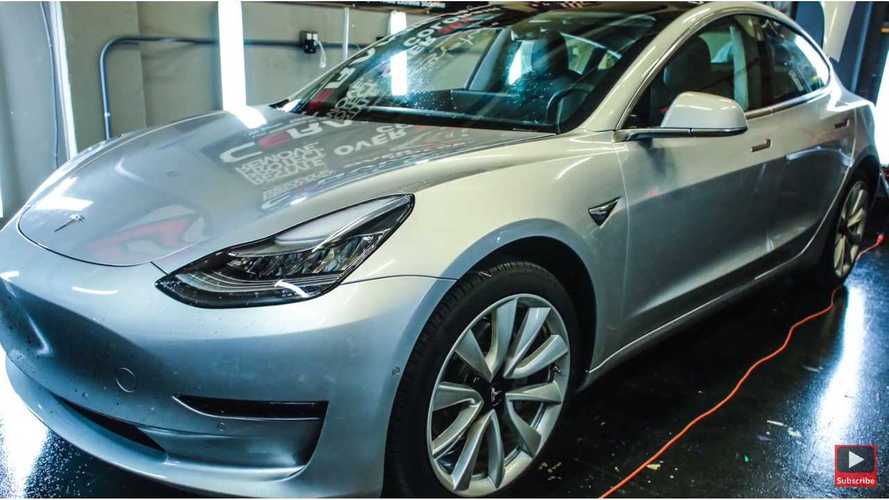 TESLA SHOWDOWN: WE GOT A TESLA MODEL 3, FILMED IT, AND COMPARED IT TO A MODEL S

We've seen a handful of Tesla Model 3 review videos floating around — including an excellent hour-long, deep-dive into the car's features by our friends at Model 3 Owners Club. That said, we just got a chance to conduct an in-depth evaluation of Model 3 for ourselves. It's a fascinating car and in our view, will come to dominate the mid-sized sedan segment over the next few years.

In some ways, Model 3 demonstrates how Tesla has elevated its interior design capabilities and improved the integration of features, functionality, and storage as the company moves forward. In other ways, Model 3 reinforces the contention that Model S remains Tesla's flagship sedan. We think it's worth comparing and contrasting the two Tesla sedans to better understand the differences between the cars.

Above: Examining a few of the subtle, and not-so-subtle similarities and differences between a Tesla Model 3 and Model S (Youtube: EVANNEX)

We spent two full days with the Model 3, reviewing the interior and exterior in granular detail. We examined the car through the lens of five years (since 2012!) of Model S ownership. Sure, some Tesla owners (like us) are wondering how these siblings stack up against one another. But there are many others pondering the possibility of owning their first Tesla. The big question is... if you're considering the purchase of a Tesla Model 3 or Tesla Model S, which one should you buy?

Let's compare and contrast some of the interior features of Model 3 and Model S with particular emphasis on driving and vehicle control displays, HVAC capabilities, interior volume and storage, the front driver's compartment, and the little things that add functionality to the interior.

Driving and vehicle control displays.  The Model S boasts two digital displays instead of one in the Model 3. The Model 3's horizontal, center display is also smaller (15-inch) vs. a vertical, center display which is larger (17-inch) in the Model S. Because Model S retains an information display immediately in front of the driver, it provides somewhat more comprehensive information content. As an aside, the 15-inch landscape display in Model 3 appears to be larger than it is and provides a full range of driving and vehicle information at a glance.

HVAC.  Model 3's HVAC approach demonstrates a significant step forward for Tesla. Both the Model S and Model 3 HVAC approaches are functional and capable, but the Model 3 has a definite advantage in terms of directional control and aesthetics. In addition, its novel design is impressive.

Interior volume and storage.  Because Model 3 is a mid-size sedan, it can't compete with Model S in interior volume—an important factor for many owners. Overall, interior volume in the Model S is far superior to Model 3. You get 30 cubic feet in Model S vs. 15 cubic feet in Model 3. As important in our view, the Model S hatchback design has significant advantages over the Model 3 conventional trunk opening. The hatchback opening provides very easy placement of large objects. It should be noted that the Model 3 trunk, when coupled with second-row fold-down seats, does offer the ability to carry long objects with relative ease. The Model S also has a power liftgate instead of the Model 3's manual trunk. In addition, Model S has a larger frunk than Model 3.

Driver visibility. The interior design of Model 3 is striking in the sense that it eliminates the binnacle that normally sits directly in front of the driver, replacing it with a 15-inch landscape center display. With the binnacle removed, the Model 3 dash is lowered, allowing a more complete view of the road immediately in front of the vehicle. The large expanse of glass above the driver provides the feeling of an aircraft cockpit.

Center console. Sitting in the driver side cockpit of Model 3, it becomes obvious that Tesla has improved its interior design chops. The center console for Model 3 (available with the premium option package) is well-designed and functional. It offers easy mobile device charging, dual USB ports along with a 12V port, and elegant storage, complemented by storage compartments in the doors.

Lack of buttons. For Model 3, just about everything except window and door opening is controlled via the landscape display. This level of software control is impressive, but we felt that there might be times when it would be easier to use an analog alternative for, say, the control of the side mirrors or glove box.

The little things.  There are little things you'll find in a Model 3 that are absent from the Model S — coats hooks, a built-in rear seat armrest, small storage compartments, back-of-seat kangaroo pockets, etc. To be a bit self-serving for a moment, most of these items can be had (in the aftermarket) for Model S from EVANNEX.

Moving to the exterior, it's apparent that Model 3 has the same vehicle DNA as Model S, but like all siblings, there are visual (as well as characteristic) differences.

Looks. The most obvious (in-person) differences are the shorter hood for Model 3, the noticeably narrower width of the vehicle, and smaller wheels. Because it is shorter and narrower, Model 3 has a less striking stance than Model S. Overall, the larger size of the Model S is more visually impressive. We think it's fair to state that many Model 3 owners will remedy some of these issues in the aftermarket, but in the case of Tesla's sedan siblings, size matters.

Sensor suite. Autopilot (and ultimately, autonomous driving capability) will be available for both Model S and Model 3. It appears that functionality and capabilities in this domain will be identical.

Door handles. We did have a few small quibbles with Model 3. The push-rotate-grab door handles of Model 3 achieve the required aerodynamic advantages for an electric vehicle, but they pale in comparison to the auto-present and retract door-handles for Model S. We felt that Model 3 handles weren't as ergonomic, particularly if you're carrying something as you get into the vehicle.

Wheels. The 18-inch Model 3 aero covers are a matter of personal taste, but the underlying wheel (rim) is a bit conventional in our view and doesn't offer an aesthetic that Model 3 deserves. The 19-inch wheels (available as an option) are more interesting, but still a bit less luxe than Model S (19-inch and 21-inch) wheel options.

Performance.  Before going any further, it's important to note that we weren't able to test drive the Model 3 during our recent evaluation. Last year, we did enjoy a test ride in the Model 3 prototype at Tesla's launch event. At that time the ride of Model 3 felt like a Model S, but it didn't have the explosive torque and power that Model S owners are accustomed to. If you're looking for ludicrous 0-60 mph times (gulp, 2.28 seconds), the Model S is your car. On the other hand, the published findings of a number of different test drives indicate that drivability and overall performance of Model 3 are quite impressive for a car at its price point. To that end, Model 3 can race a respectable 0-60 mph in 5.1 - 5.6 seconds.

Range. Both Model S and Model 3 have plenty of range for road trips and access to Tesla's vast Supercharger network. On the whole, depending on which variant you look at, Model S will provide more range (259 - 335 miles of range) than Model 3 (220 - 310 miles of range). Also, many Model S owners will be able to take advantage of free supercharging (with a referral) whereas Model 3 owners will not have access to that particular perk.

In reality, the Model 3 and Model S are different vehicles for different demographics. Both have the same vehicle DNA, both will turn heads, and both are the epitome of current automotive technology. It's clear — you definitely want a Tesla. Which Tesla is right for you?

Although we were extremely impressed with the Model 3, if you're considering a Tesla (and can afford it), we recommend going with Model S. On performance and premium feel, Model S wins going away. On exterior aesthetics, Model S provides a head-turning design that Model 3 can't match. On (a few) interior design cues, it's Model 3 by a nose. On interior space, seating, and storage volume, Model S triumphs. And if you consider availability, you can get your hands on a new or used Model S in a matter of weeks. Model 3 availability? That's an entirely different discussion.