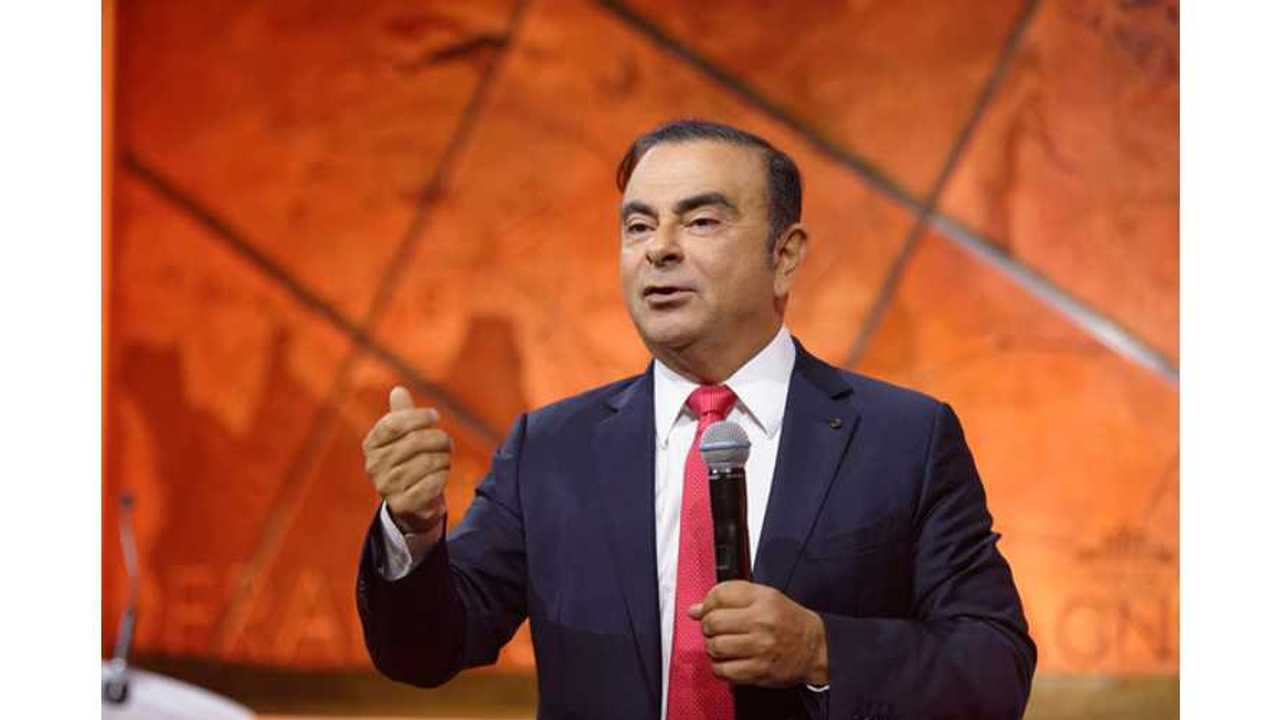 Carlos Ghosn was the first CEO among established manufacturers to throw serious money into the EV game, with a goal to take them mainstream.

And as it turned out, things didn't go all that smoothly at the start for Nissan (or for any OEM really, as demand was seriously over-estimated at the start of this decade), but since the Nissan LEAF was introduced in December 2010, 300,000 have been sold.

"People said, 'Yeah, but you could be wrong.' But I knew that the constraints on emissions were becoming heavier. There was no way ... we could solve all these limitations technically through gasoline engines and diesel engines or even hybrids. We needed to move to something more radical, like electric cars."

"For me it was obvious. And I said, the first one who was going to move in this direction was going to benefit a lot, not only in terms of brand, but in terms of the advantage of mass-marketing the electric car."

Today, the Renault-Nissan-Mitsubishi Alliance has sold more than 500,000 plug-ins, and now after the acquisition of Mitsubishi earlier this year, the new strategy is even bolder.

By 2022, the Alliance will introduce 12 new all-electric models using common platforms. Adding to those plans, plug-in hybrids will now also be spread throughout the Alliance - using Mitsubishi's experience with the Outlander PHEV, and two other utility plug-ins coming to market over the next two years.

In a recent interview, Carlos Ghosn states that the rest of the industry is now following Nissan and Renault's lead, announcing an upcoming EV rush:

"Now they come. Everybody's coming. The reality appears more clearly to a lot of people today."

Ghosn encourages that, thanks to the early experience with LEAF and ZOE, the Alliance is now bringing forward 2nd generation EVs - vehicles that will be better and more affordable via mass global production, and using the same power-trains and batteries between the 3 Alliance companies.

"The knowledge we have today with the Leaf or the Zoe is extremely precious, because we know how people use electric cars, what they need and what are the problems. This will allow us to prepare a much better generation of electric cars coming in the next six years."

"These 12 are not, 'This is our first venture. No, no. These are cars coming to take an important position, and they will be profitable, with cost targets that are based on reputation and best of technology."

"Now we're saying: One platform. One set of batteries. One set of motors. We're going to go together because our objectives are mass marketing and profitability."

For China, Ghosn envisions a BEV with $8,000 price tag. This super-affordable model will also be exported to India and Brazil.