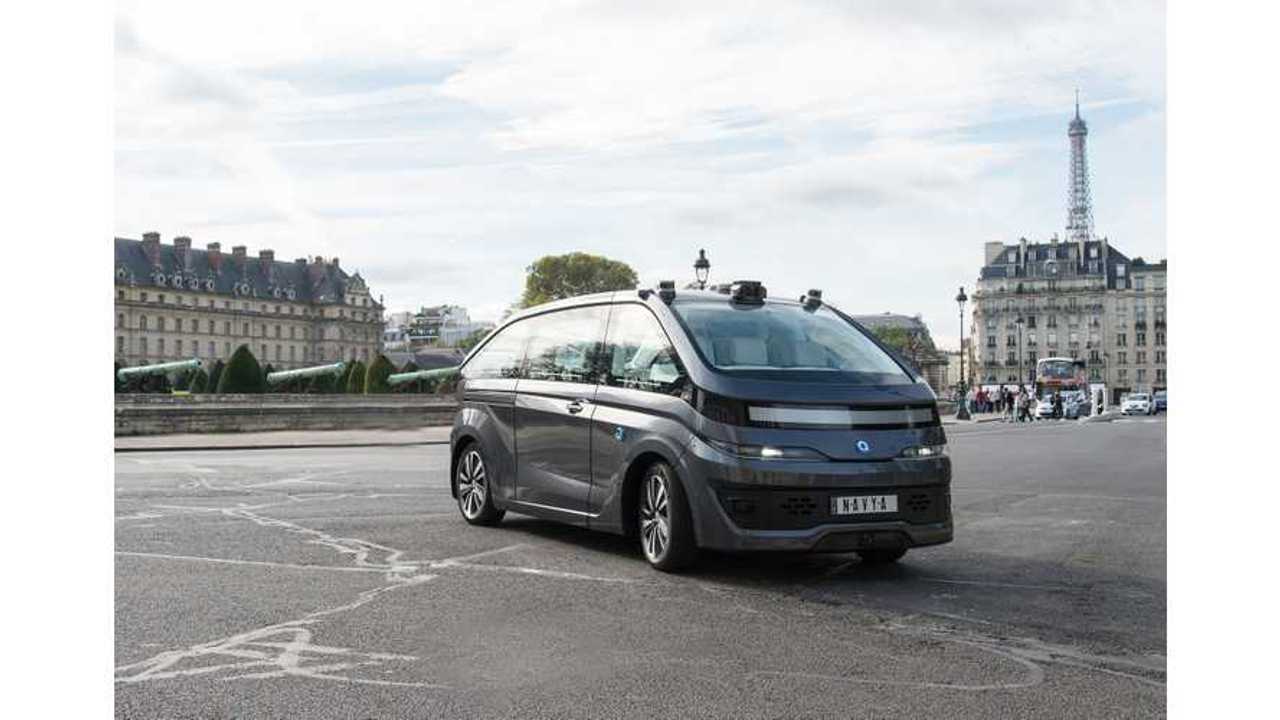 NAVYA has launched its all-new, all-electric and fully autonomous, AUTONOM CAB - the first 100% autonomous robo taxi, which is scheduled for market launch in 2018.

It's can be equipped with either a 22 or 33 kWh battery, good for up to 10 hours of autonomous driving with 1-6 passengers on-board.

The AUTONOM CAB is second autonomous EV from NAVYA, after the ARMA introduced few years ago.

Hopefully the CAB has a better public launch than the ARMA, which found itself in an accident in Las Vegas only an ~hour after hitting the road.  The ARMA was not deemed at fault, but the situation could still have been easily avoided - which prompted a NTSB safety probe.

"In addition to the first AUTONOM CABS reserved for its launch partners for the second quarter 2018, today NAVYA is inviting other businesses and organisations to place their orders. The following AUTONOM CABS will be delivered for the third quarter 2018. NAVYA has already increased its production capacity in its Lyon-based production facility to cope with the additional sales of AUTONOM CAB. Its production may also be extended to the Saline (Michigan – United States) facility for deliveries pertaining to the North American market."

In a decisive move toward creating smart cities, the totally electric-powered AUTONOM CAB provides an intelligent transport service for individual trips in urban centers. The cab was designed from the outset to be autonomous, just like all the vehicles in the AUTONOM range, meaning that there is no cockpit, steering wheel or pedals. Able to carry one to six passengers, AUTONOM CAB is a fluid, continuous and effective transportation solution. The AUTONOM CAB is capable of speeds up to 55 mph, but will average closer to 30 mph as it travels in urban areas to conform with local speed limits.

“Imagine what cities would be like if there were nothing but AUTONOMS running on the road. No more traffic jams or parking problems, fewer accidents and less pollution, says NAVYA CEO Christophe Sapet. “At NAVYA, we recognize that the status of individual cars is rapidly changing, especially among younger generations, many of whom don’t have their driver’s license and are less attached to the concept of owning a car. What they want are mobility solutions available 24/7, ensuring their safety and well-being at a reduced cost. AUTONOM CAB is leading edge and will revolutionize both habits and technology, enabling a great many people to gain access to a brand-new mobility solution.”

Available as either a private or shared service, AUTONOM CAB places an emphasis on well-being and comfort and will offer a wide range of services benefiting from fully connected technology to restore freedom of mobility.  Thanks to a dedicated smartphone application called NAVYA APP, users can order an AUTONOM CAB with a simple click, and open and close the vehicle’s door to start it up. AUTONOM CAB is also capable of pre-empting traffic jams so users can be on time despite unpredictable traffic.

At the forefront of research and development and drawing on its production capacity in France and the USA, NAVYA is in a position to deploy the AUTONOM CAB quickly. Current plans are for the AUTONOM CAB to begin service in the second quarter of 2018.

With NAVYA’s research and development expertise recognized around the world, AUTONOM CAB benefits from the most sophisticated multi-sensor technology on the market with no fewer than 10 Lidar sensors, 6 cameras, 4 radars, 2 GNSS antennae and 1 inertial measurement unit (IMU). These sensors provide at least a triple redundancy across all functions, guaranteeing exceptional reliability. The on-board computer is capable of constantly merging data received by the sensor architecture. AUTONOM CAB’s intelligence is based on high performance steering and detection systems that combine a number of cutting-edge technologies. Which means AUTONOM CAB can move around efficiently and safely, making the most appropriate decisions instantly. And all without a driver.

Navigating open roads requires major mapping work and route optimization. In order to optimize navigation, NAVYA created its own mapping tool that generates the most comprehensive and precise cartography. NAVYA’s extensive trials around the world have provided the real-world experience necessary to enable its teams to continue perfecting and refining its performance.

Recognizable by its rounded contours, AUTONOM CAB’s silhouette is both modern and robust. Outside, AUTONOM CAB has a colored light band that communicates with its passengers as well as pedestrians. Inside, the glass compartment provides users with a panoramic view of the city.

NAVYA already has various partnership agreements with transport specialists, notably with KEOLIS in Europe and the United States and with RAC in Australia. These partnerships will enable NAVYA to roll out fleets of Autonoms that will operate on the open road in city centers. Other partnerships are set to be announced during the Consumer Electronics Show (CES) 2018 in Las Vegas.