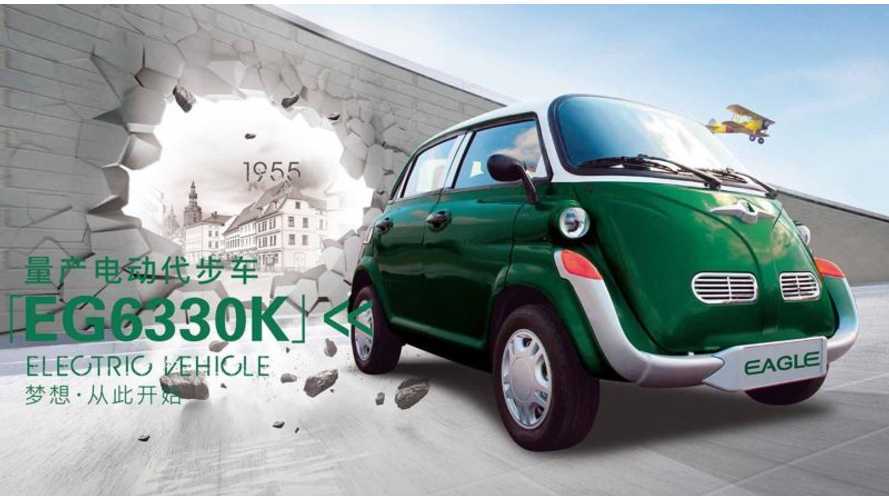 This isn't your classic BMW Isetta.

Chinese automakers are still mining the designs of other automakers when it comes to producing new vehicles. It’s a practice that is surprisingly common, with Chinese firms not only mimicking the likeness of other mainstream brands but sometimes even mimicking nameplates. Another Chinese automaker taking the design of a more-popular car isn’t news. However, this latest compact car from the Chinese automaker Eagle is quite “unique.” And by unique, I mean heavily resembles a certain classic BMW runabout – the Isetta and 600.

CarNewsChina.com is quick to point out the Eagle EG6330K, which is a far less iconic name than the Isetta, more closely resembles the styling of the BMW 600. Both the Isaetta and 600 are similar. Eagle didn’t follow the Isetta’s single nose-based door. Instead, the automaker added four conventional doors and another wheel at the rear. Apparently, China has a market for low-speed electric vehicles, which is ripe with compact copycats.

Also different is the powertrain. The Eagle sports a 5.3-horsepower electric motor and a 7.2-kilowatt-hour lead-acid battery. Top speed is a claimed 60 kilometers per hour (37 miles per hour) with a range of 120 km (75 miles). The car seats four and weighs just 750 kilograms (1,653 pounds). CarNewsChina.com estimates price should start at around $4,000.

While the exterior is clearly inspired by BMW’s classic design, the inside of the EG6330K is quite modern. There’s a plethora of black plastic, big vents on the dash, HVAC controls, an MP3 player, and overall simple controls.

This isn’t the first time Eagle has copied a German automaker. In 2015, the company unveiled a Porsche Cayman knockoff. Thankfully that car never entered production. The copying of mainstream brands by Chinese automakers likely won’t slow anytime soon. The designs may not make production or hit a broad audience outside of China, but that won’t stop automakers in the country from trying to copy from sells well.