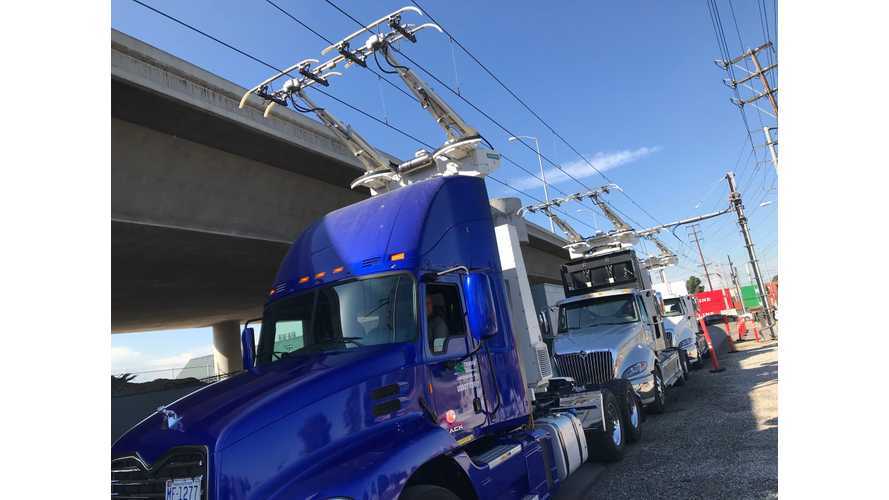 Siemens and the South Coast Air Quality Management District have launched the first U.S. eHighway - an electrified highway demonstration project near the U.S. Ports of Los Angeles and Long Beach.

Three trucks have been adapted for the project - each with a different drive application: one all-electric and two hybrids (diesel and CNG).

The trucks are able to drive using electricity from Siemens' eHighway via active pantograph.

According to Siemens, the eHighway doubles the efficiency of the Class 8 trucks and saves $20,000 over 100,000 miles of driving per truck.

The total cost of the project is $13.5 million:

Siemens demonstrates the eHighway for heavy-duty, long-range driving also in Sweden and Germany.

Check out a video on the operation today here.

Siemens and the South Coast Air Quality Management District (SCAQMD) are conducting a one-mile, zero-emission eHighway demonstration in Carson, Calif., near the ports of Los Angeles and Long Beach. Three big-rig trucks hauling freight are running along the stretch of highway that uses Siemens technology to electrify select highway lanes via an overhead catenary system. This catenary system supplies the trucks with electric power, similar to how modern-day trolleys or streetcars are powered on many city streets, and the system also allows for truck operation outside of the electrified sections of infrastructure.

Heavy-duty trucks are the number one source of smog-forming emissions in Southern California. Developing a zero- or near-zero goods movement system in the ports will reduce smog-forming, toxic and greenhouse gas emissions in communities around the ports, which are some of the most heavily impacted by air pollution.
“This project will help us evaluate the feasibility of a zero-emission cargo movement system using overhead catenary wires,” said Wayne Nastri, SCAQMD’s executive officer. “This demonstration could lead to the deployment of eHighway systems that will reduce pollution and benefit public health for residents living near the ports.”

“Every day, Americans rely on the goods and services that are carried by freight. But with that mode of transportation predicted to double by 2050, only one-third of this additional travel can be handled by trains despite expansion of rail infrastructure. Experts expect global CO2 emissions from road freight traffic to more than double by 2050,” said Andreas Thon, head of Turnkey Projects & Electrification, North America. “This electrified truck system, what we call eHighway, can modernize the existing infrastructure using the latest technology to accommodate the growing amount of freight travel, reduce harmful emissions, and keep these ports, one of our country’s major economic drivers, competitive.”

One battery-electric truck, a clean natural-gas hybrid-electric truck and a diesel-hybrid truck are now driving on a one-mile catenary system on the north- and south-bound lanes of South Alameda Street from East Lomita Boulevard to the Dominguez Channel in Carson.
The system is expected to lower fossil fuel consumption, reduce truck operating costs, substantially reduce smog-forming, toxic and CO2 emissions, and help accommodate the growing reliance on freight transportation. The aim of this specific project is to demonstrate the eHighway system applied in truck operation on public roads in an urban U.S. setting and to further prepare applications for larger scale initiatives in the future.

The demonstration system, similar to trolley systems or streetcars, features an overhead contact line that makes power available to trucks along the road and an active pantograph located on top of the eHighway trucks that transfers energy from the overhead lines to the truck’s electric motors, allowing the truck to operate with zero emissions while on the catenary system.

The pantograph can connect and disconnect automatically with the contact line via a sensor system while the trucks are moving. This allows the eHighway trucks to easily switch lanes or pass other vehicles without being permanently fixed to the overhead systems like a streetcar. To further ensure the same flexibility as conventional trucks, the eHighway vehicles use an electric-hybrid drive system, which can be powered either by diesel, compressed natural gas (CNG), battery or other on-board energy source, when driving outside of the catenary lines.

Under a separate contract with SCAQMD, the air pollution control agency for Orange County and major portions of Los Angeles, San Bernardino and Riverside counties, the natural-gas hybrid and battery-electric trucks have been developed by Escondido-based TransPower and the diesel hybrid was developed by Mack Trucks, a part of the Volvo Group.

In June 2016, Siemens launched the world’s first eHighway system on public roads in Sweden. The eHighway is running on a two-kilometer section of the E16 highway north of Stockholm through 2018. Two bio-diesel-hybrid vehicles from truck-maker Scania, subsidiary of Volkswagen, are being used for the project. In addition, three field trials of the eHighway technology on German highways are planned to start operation in 2019.

Siemens is dedicated to improving Californian infrastructure through technology—from commissioning combined-cycle flexible power plants in El Segundo that can power nearly 450,000 Californian homes and intelligent software that helps CAISO manage renewable energy, to Sacramento-built advanced technology light rail vehicles for San Diego and San Francisco and some of the country’s cleanest-running locomotives for the Capitol Corridor. Siemens also contributes to the local economy with an extensive footprint in the region including its over 1,000-person U.S. rail manufacturing and service headquarters in Sacramento and its next47 innovation hub in Silicon Valley.