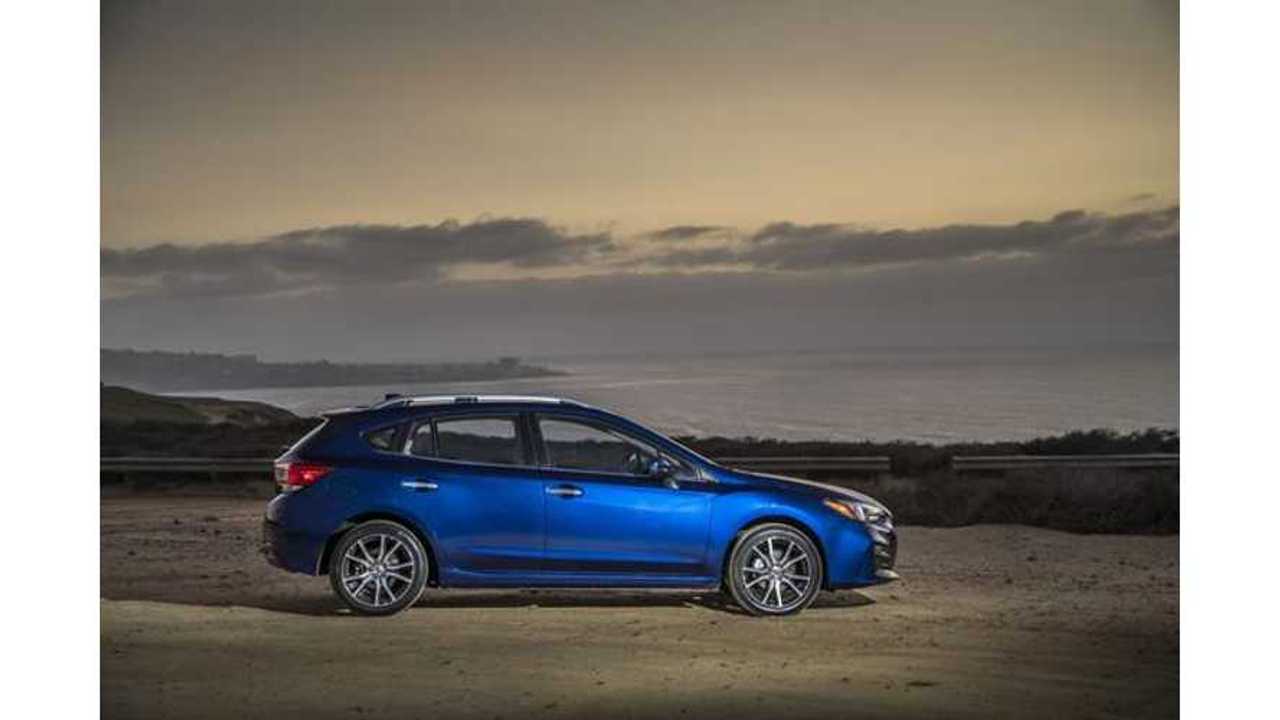 A Subaru PHEV will be made possible through the use of the automaker's global platform, which is the foundation for the Impreza (Image Credit: Subaru)

A Subaru PHEV is coming to the U.S. this year, followed by a battery-electric vehicle in 2021, all compliments of joint efforts with a previous automotive partner and some new teammates.

Subaru's relationship with Toyota is nothing new. The two have partnered on projects in the past. In fact, the Toyota 86 and Subaru BRZ are essentially the same car (and then there's the Scion FR-S, which is also the same car, made by Toyota and now discontinued). All of these car's use Subaru's boxer engine, but shared powertrains among these automakers are about to head into the future.

Toyota owns 17 percent of Subaru and has welcomed the automaker into a collective EV partnership called EV Common Architecture Spirit Co. It was created last fall along with Mazda, and supplier Denso, to focus on the development of shared EV architecture.

As a result of the new venture, new partners in Subaru's future electrification pursuits -- aside from Toyota and Mazda -- will include Daihatsu, Suzuki, and Hino.

This not to say that Subaru isn't already working on its own in-house electrification efforts. However, according to the automaker's chief technical officer, Takeshi Tachimori, upcoming plug-in hybrid, and potentially, battery-electric vehicles, will bank on such partnerships.

Tachimori admits that Subaru is much too small to be able to go at this development itself. In order to get the PHEV to market quickly, Subaru will use the Toyota Prius Prime's system as a platform. The exec told Automotive News:

"For our plug-in hybrid to be introduced this year, we have used Toyota's technologies as much as possible.

We can't engage in a large-scale development."

Interestingly, nonetheless, Subaru will still use its longitudinal "boxer" engine configuration, in tandem with the electric motor and battery pack. Whereas, the Prime has a traditionally mounted engine setup.

Currently, Subaru has no electric models available. Its Stella plug-in only sold a paltry 200 units for fleets and was discontinued in 2011. The automaker -- like all others regardless of size -- must comply with emissions requirements.

At this time, Subaru has sent five engineers to be involved in the project. Tachimori's hoping that Subaru's involvement, even if minimal at this time, will help the collective group save funds and resources. He said the unidentified Subaru PHEV will be sold initially in CARB states and shipped to the U.S. from Japan.

In terms of the BEV in 2021, Tachimori revealed that Subaru is currently in the initial stages of development and is not yet utilizing the partnership, though it's likely that the group will be involved in the future. The exec concluded:

"Every carmaker has a sense of urgency. We don't know how battery technology will evolve or how we should handle it or what would be the best way to use it as an energy source. Carmakers are still trying to figure out what a basic EV structure will look like."

With the growing success of the Toyota Prius Prime, it will be exciting to have a similar offering from Subaru. The automaker prides itself on its standard all-wheel-drive system, high safety ratings, and EyeSight active safety technology. Pairing the electrification with Subaru's boxer engine should prove interesting as well. Hopefully, the partnership also pushes Toyota and Mazda to move more quickly toward future BEV models.