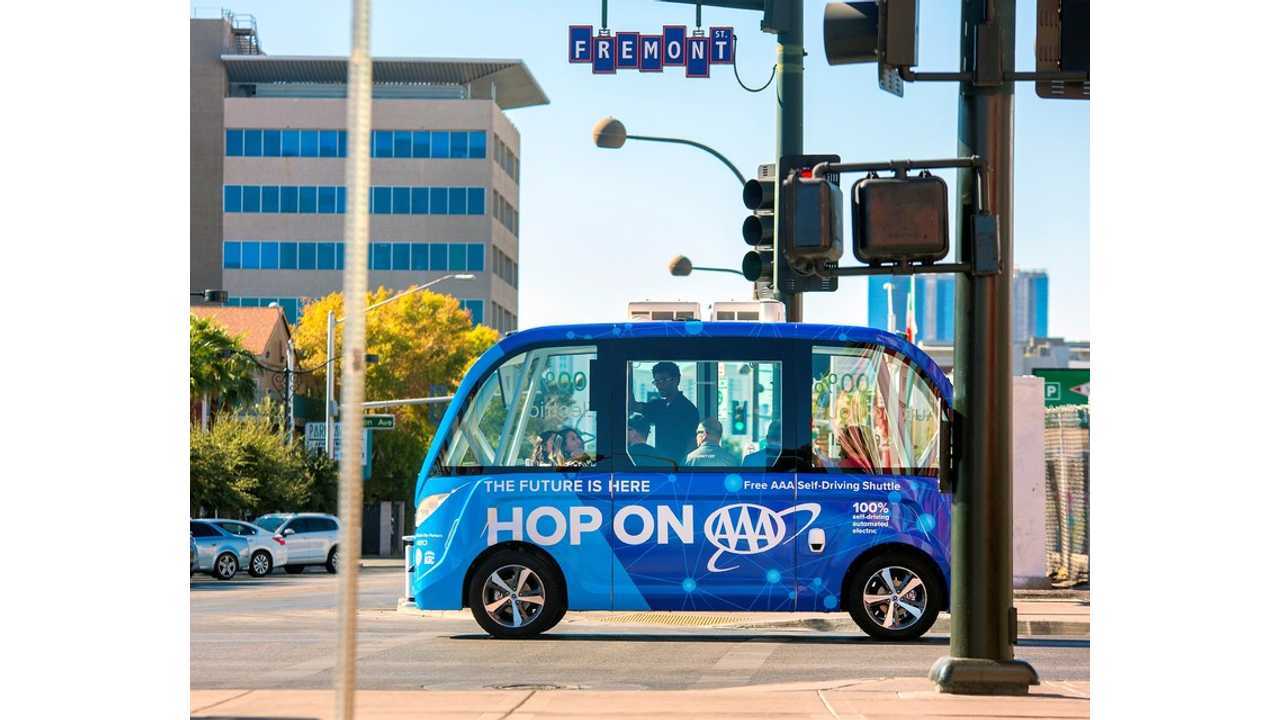 Probably not the best kick-off news cycle for an autonomous debut.

America's first public self-driving shuttle has launched in downtown Las Vegas using NAVYA Arma vehicle -  supplied from Michigan where 25 are to be build for North America customers by the end of 2017.

The shuttle pilot project will enable a quarter-million residents and visitors to Las Vegas a first-hand experience using autonomous vehicle over the course of a year.

Unfortunately, the shuttle was involved in a minor accident about an hour after it launched, when a truck backed into it (the shuttle was not found at fault, but probably could have done a better job avoiding this accident - more/video on that below).

It's pretty cool to see the first all-electric, autonomous vehicles on the road (in this case being a fixed routes and just low-speed driving for now), although it will take some time for the technology to match a human driver - at a reasonable cost.

"In addition to studying how the shuttle interacts in a live traffic environment in downtown Las Vegas' busy Innovation District, AAA will survey riders on their experience in order to understand why a large percentage of consumers remain wary of driverless technology, and whether a personal experience changes their perception. AAA partnered with the city of Las Vegas, the Regional Transportation Commission of Southern Nevada (RTC) and Keolis North America (Keolis), which will operate and maintain the NAVYA Arma fully electric shuttle."

"The shuttle is manufactured by NAVYA, comes equipped with LiDAR technology, GPS, cameras, and will seat eight passengers with seatbelts. Safety features include the ability to automatically and immediately brake in the event of a pedestrian crossing in the path of the vehicle. In addition to surveying the shuttle's riders, AAA will examine how others sharing the streets react to it -- including pedestrians and cyclists.  AAA chose Las Vegas for the launch because of the state's progressive regulations on autonomous vehicles, heavy investment in innovation, the high volume of visitors and a sunny, dry climate that's favorable for testing new driving technology."

As noted, the autonomous shuttle had a minor accident on its first day of use, when a semi-truck backed into it.   It was reported that the shuttle stopped when it noted the truck, but the semi continued to reverse...ultimately right into the side the passenger vehicle, unaware it was in its path.

While the truck was cited at fault, the first question one thinks of in this situation (as did one of the passengers recounting the event in the news video below) is: "would an aware human driver not only have noticed the truck, but taken further corrective actions to avoid it?  Or at least peeped the horn?"  The answer of course being - yes.

A human operator was also in the vehicle to oversee operations (and maybe giving a live tour narrative), but was unable to intervene to avoid the fender-bender.  Clearly some further kinks need to be worked out.

Video (below): Further details, and an 'on the scene' response from a representative of the shuttle service from Keolis

Covering a 0.6-mile loop in the Fremont East "Innovation District" of downtown Las Vegas, the all-electric, self-driving shuttle offers free rides for people to experience autonomous transportation in a real-world environment. The shuttle is the country's first autonomous shuttle to be fully integrated with "smart-city" infrastructure, communicating with traffic signals to improve safety and traffic flow. The shuttle is operated and maintained by Keolis, which also led the efforts to integrate its vehicle into the smart-city infrastructure, in partnership with the city of Las Vegas and NAVYA.

The shuttle can be boarded at any of the autonomous-vehicle shuttle's three stops located on Fremont Street and Carson Street between Las Vegas Boulevard and 8th Street.

AAA is proud to work with the Las Vegas community on this program. The auto club will donate $1 per passenger during the pilot program for a minimum donation of $100,000 to the Las Vegas Victims' Fund and its efforts to support the needs of people impacted by the Las Vegas mass shooting October 1, 2017.