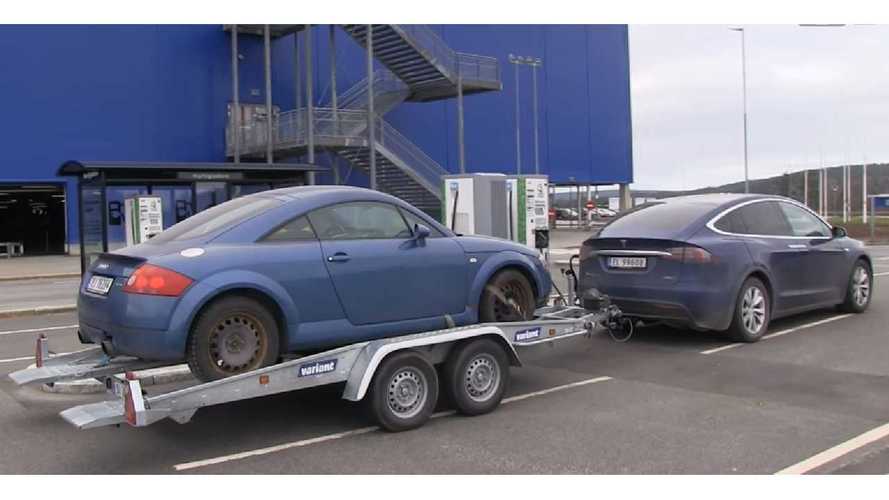 What happens with the Tesla Model X when you tow something quite heavy and attempt to accelerate like crazy (within reason so as not to destroy your Tesla, of course)?

Bjørn Nyland is at it again - and is as amusing as ever, while also being informative. He starts by saying he's going to try to improve the 2000 Audi TT's acceleration. It's rated to do zero-to-60 mph in 7.3 seconds. It's nothing like the 4-second zero-to-60 stat of today's Audi TT, but that's beside the point. His method to improve the car's acceleration is:

7.2 seconds zero-to-60-mph with 3,000 lbs. in tow while taking it easy and experiencing a traction issue!

"By strapping it on the trailer and then pulling it with the Optimus Prime (his Tesla Model X P90DL)."

It's not quite the method that others might use, but whatever works. One interested commenter asks Nyland:

"What do you do for living? You always pulling trailer around and stuff?"

Electric cars provide an incredible amount of instant torque, which isn't available in any other powertrain. People that seek extra torque for towing --  such as pickup truck drivers, for instance -- opt for diesel engines due to their beefy low-end torque. Unfortunately, the sacrifice is higher horsepower and quick-off-the-line acceleration.

The above isn't true with EVs.  You get the instant low-end torque, immediately followed by plenty of seamless acceleration. The only losses in the typical electric car equation are acceleration at the top of the speedometer, as well as high top speeds, neither of which any daily driver will ever have the opportunity to experience without breaking laws or hitting the race track (well there is the Autobahn). Instant torque and immediate "ludicrous" acceleration are both qualities you will notice and utilize in your everyday commute.

Keep in mind that Nyland uses Ludicrous Mode, Launch Mode, and 19" Nokkian Hakkapeliitta 8 studded winter tires, however, he says he's taking it easy so as not to put too much stress on the car. Nyland shared:

"I accelerated gently (as said in the video). People who launch at drag race put way more stress on the car than me."

It's pretty crazy to fathom that a large electric SUV can pull a load and accelerate significantly faster than other cars that only have to pull themselves. This is especially true when considering that in the U.S., the average car hits 60 mph in about 8 seconds and SUVs ring in around 9-10.

TLDR; It was as fast or faster. But traction on studded winter tires were not optimal. Better results on summer tires.