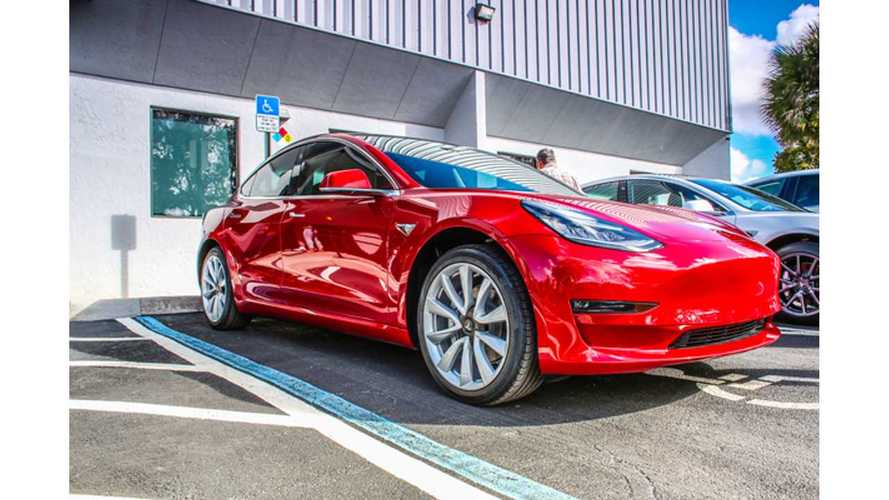 EVANNEX EVENT: HUNDREDS COME OUT TO LEARN MORE ABOUT THE TESLA MODEL 3

Having taken delivery of his Tesla Model 3, our founder (and Dad) Roger Pressman decided it was worthwhile to show off the car locally here at the EVANNEX offices in South Florida. Even with the Model 3 currently on display at a local Miami store, RSVPs came flooding in via Tesla Owners Florida (special thanks to Club President Larry Chanin). But it wasn't just the Model 3 that would be at this marquee event.

It turns out that Trevor Page, founder of Model 3 Owners Club, was coming to town for a vacation and agreed to come to the party for an exclusive meet-and-greet with his fans. With an active 'Model 3 Owners Club' forum, and over 40,000 subscribers on Youtube and almost 20,000 followers on Twitter — word spread quickly that he would be at this local event.

Above: Trevor Page, founder of Model 3 Owners Club, comes out for a special meet-and-greet here at our offices (Youtube: EVANNEX)

We picked a casual "Cars and Coffee" theme, and, before long — the event packed our parking lot with Tesla fans coming from all over the state of Florida. Tesla Model S and X vehicles all rolled in (as expected) but there was a surprise. Two other local Model 3 owners came to attend the event. Their cars were quickly mobbed by onlookers and we had a take numbers (deli-counter style) in order to control the lines to see the Model 3.

Sipping coffee and munching on donuts, onlookers appeared to be enjoying themselves while chatting about the latest Tesla news. Many were planning to head north to attend the SpaceX Falcon Heavy launch later in the week. During the event, attendees also checked out other EVANNEX demo cars — including our own Model S and X — and perused a curated collection of aftermarket Tesla accessories on-site. It was a blast to meet so many Tesla fans.

One thing became crystal clear during the party — hordes of Model 3 reservation holders are thrilled to take delivery of their car! From the (relatively small) sample of folks in our parking lot, it appears that Tesla is destined to reach many happy customers as production ramps up and more deliveries roll out. In any event, here are a few more photos from the party if you couldn't make it...

From top to bottom: The EVANNEX cars are staged for the event; EVANNEX owners (father and sons) get ready for the crowds; a look at our guest stars (two other Tesla Model 3s); Tesla Model S and X vehicles all driving in to park; coffee, donuts, and Teslas for the guests to enjoy; more Tesla fans having fun at the party (Photos: EVANNEX)