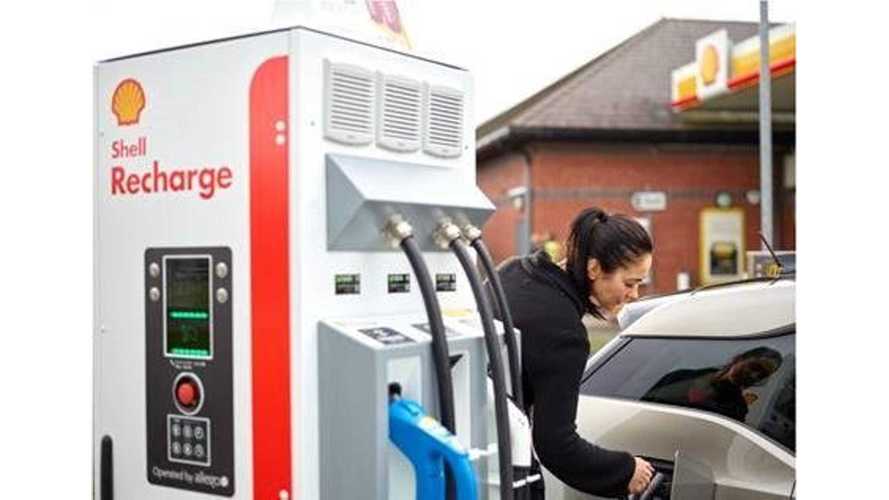 CHARGING YOUR TESLA AT A SHELL GAS STATION? HERE’S WHAT TO EXPECT...

The times, they are a changin’, and the signs of the coming revolution can be seen at a London petrol station, where the first electrified London black cab plugs into one of the first of oil giant Shell’s public fast-charging stations (see photo below). Will your Tesla be next?

The multinational petroleum behemoth has launched a program called Shell Recharge, which will add DC fast chargers to selected service stations around the world. The 50 kW chargers are compatible both the CCS and CHAdeMO charging standards, and also include an AC Type 2 (43 kW) connector. Shell says it hopes to provide Tesla adapters “in the near future.”

The company has chosen England as the first market for its new service, because of the country’s rapid growth in EV registrations. The service is now available at two stations (“forecourts” to our British mates) and one in Derby and will be rolled out to seven more by the end of 2017. Shell stations in the Netherlands, Norway and the Philippines will soon be charging up as well. Netherlands-based charging operator Allego has partnered with Shell to install and operate the new UK stations.

Above: A look at the new "Shell Recharge" program (Youtube: AP Archive)

Shell also recently acquired Dutch charging network operator NewMotion, which manages over 30,000 charging points in 25 European countries, giving Shell a stake in the home and workplace charging market. “They’re complementary offers,” said Shell’s VP for New Fuels, Matthew Tipper. “One is fast charging on the go on the forecourt and the other is a slightly slower rate of charge at the workplace or at home.”

Shell isn’t the only oil major diversifying into EV charging - Total recently bought Dutch charging operator PitPoint, and BP is in talks with EV-makers about adding charging to its retail sites.

Nowadays, gas stations don’t make their money on gas, but rather on the soda and junk food that drivers buy when they stop to fuel up. So, from the standpoint of their retail business, oil companies stand to profit whether the draw is petroleum, electrons, or some other kind of fuel (Shell also plans to offer hydrogen refueling stations in the UK soon). “We want to offer customers choice: it doesn’t really matter what kind of vehicle they’re driving, we want them to drive into a Shell station, refuel in whatever capacity the fuel is,” Jane Lindsay-Green, Shell’s UK Future Fuels Manager, told The Guardian.

How much will those customers be willing to pay? Shell Recharge will cost 49p per kWh hour after June 2018, when an introductory half-price offer ends. At full price, charging up a Tesla Model S could cost as much as £50. An unidentified gentleman in the AP video points out that this is two to three times more than it would cost to fuel a petrol or diesel car, which “can’t make any sense.” However, he also notes that drivers must often wait in line to use existing charging stations, so the price doesn’t seem to be keeping customers away, at least for now.

How much will people be willing to pay for the convenience of fast charging? Will public chargers enable Londoners, many of whom don’t have the option of installing chargers at their flats, to start driving electric? These and many other questions remain to be answered. However, the old road is rapidly aging, as Mr. Dylan told us so long ago. Here’s another sign of the changin’ times: Royal Dutch Shell CEO Ben Van Beurden recently told Bloomberg that the next car he buys will be electric.