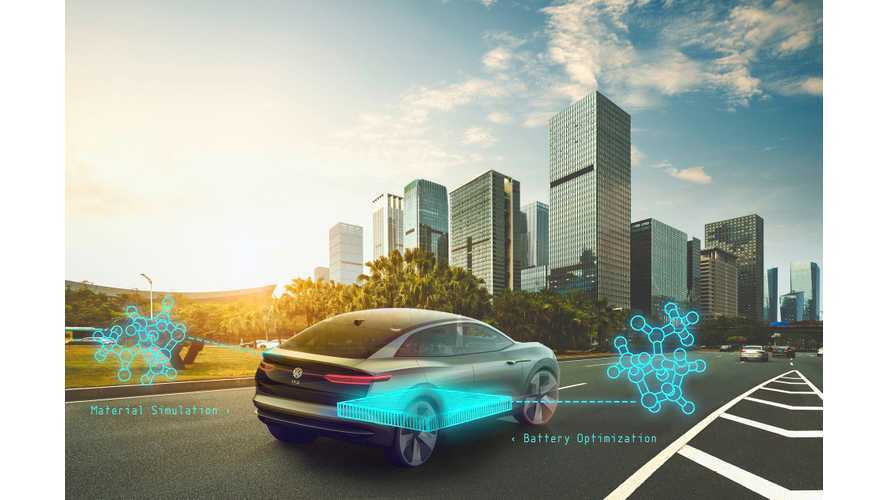 The Volkswagen Group has announced a partnership with Google on quantum computing, in three development areas - including research on batteries.

Volkswagen is the first in the automotive industry to utilize a quantum computer for complex computing tasks.

"Simulation and optimization" of high-performance batteries for EVs is something that we normally would expect to see from battery startups, or battery manufacturers, so Volkswagen's interest in the area suggests it may have designs on attempting to develop its own type of proprietary battery cells.

"The Volkswagen Group is the first automotive company in the world to work intensively on quantum computing technology. In March 2017, Volkswagen announced its first successful research project completed on a quantum computer: a traffic flow optimization for 10.000 taxis in the Chinese capital Beijing.

Volkswagen Group Information Technology & Services, Region Americas has been running an innovation team at its CODE office in San Francisco since 2013. The acronym CODE stands for Continuous Optimization and Digital Engineering. The team is made-up of Software Architects, Engineers, Data Scientists, and Researchers who work on a broad scale of tasks: from advanced Multi-Cloud computing automation, DevOps, Mobile Applications and Mobility Solutions to Data Science and Quantum Computing topics. As Volkswagen recognizes the importance of advanced technology and how it shapes modern society, the CODE team continues to push the threshold of what business may achieve through digital technology."

“Quantum computing technology opens up new dimensions and represents the fast-track for future-oriented topics. We at Volkswagen want to be among the first to use quantum computing for corporate processes as soon as this technology is commercially available. Thanks to our cooperation with Google, we have taken a major step towards this goal.”

“Volkswagen has enormous expertise in solving important, real-world engineering problems, and it is an honor for us to collaborate on how quantum computing may be able to make a difference in the automotive industry.”