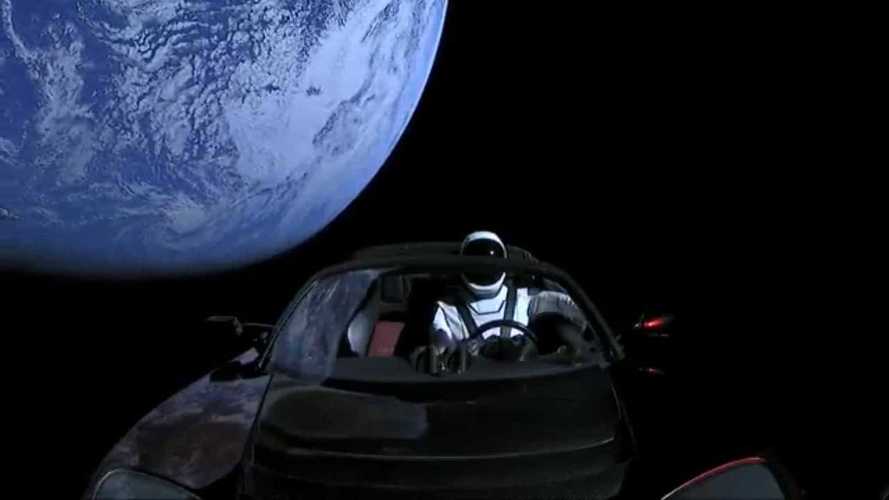 Tesla On Falcon Heavy
Of course we need to start this list with Elon Musk’s Starman cruising through space in a Tesla Roadster. Being the CEO of a car company and a rocket company has its perks, and whether you’re a fan of Musk or not, he does know how to get the attention of the world.

Car companies have been part of the space race for decades.

Make no mistake – the recent launch of the SpaceX Falcon Heavy rocket with a Tesla Roadster on-board captivated the car community, if not the world. It’s certainly not the first time a rocket was sent into space, but it is the first time a private company endeavored to reach beyond Earth's orbit, never mind sending an actual car with a spacesuit-wearing mannequin to orbit the sun. Anyone who caught the SpaceX livestream  will attest to just how awe-inspiring it was to see the car floating in orbit, with the Earth growing ever smaller in the background.

This event got us thinking about automakers and space travel. Tesla wasn’t the first car company to dip a toe into the final frontier – in fact, automakers have been part of the space race since the days of America’s Mercury program in the early 1960s. We did some digging to see what other automotive endeavors factor into space travel and here are 4 other times we recall.

GM Robonaut 2
General Motors actually has a long history with NASA and America’s efforts in space exploration. Back in 2010 the automaker unveiled Robonaut 2, and as the name suggests, it’s a robotic humanoid astronaut that can perform dexterous tasks in dangerous environments. It went to the International Space Station aboard the Space Shuttle Discovery in early 2011.

Audi Lunar Quattro
In 2016 Audi partnered with a group called Part-Time Scientists to build and launch a small moon rover. The goal is to launch it in 2019 and touch down at the Apollo 17 landing site, which was the final manned lunar mission in 1972. If Audi is successful – and gets there before other companies – it can claim the $30 million Google Lunar XPrize.

GM/Apollo Lunar Rover
Tesla may claim to have the first production-based vehicle in space, but the Lunar Rover will always hold the title as the first car to actually be used in space. It was built with considerable input from General Motors and was vital to exploring larger regions of the Moon in later Apollo missions.

Toyota 'Voice' For Kirobo Robot Astronaut
Kirobo was jointly developed by several companies in Japan and went to the International Space Station in 2013. Its purpose is to help develop and fine-tune the way robots and humans interact in zero-gravity, with Toyota creating Kirobo’s voice recognition functionality.