See The Tesla Roadster In Space From All Angles 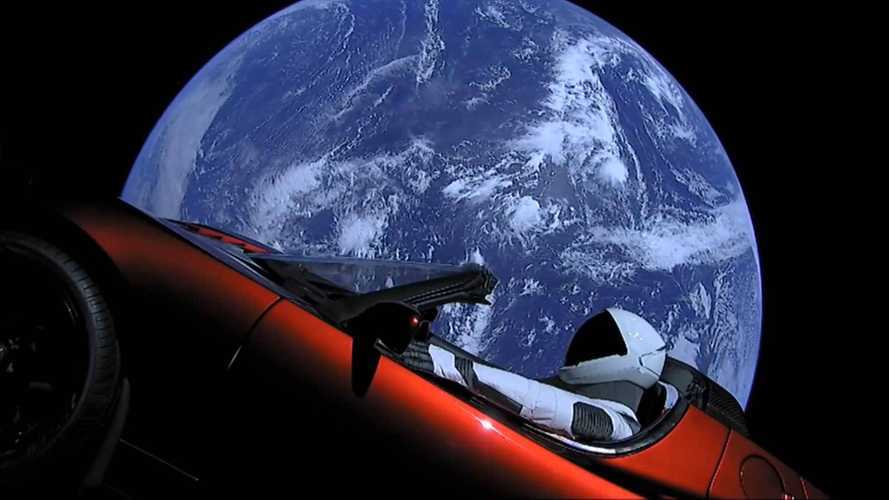 The launch was impressive, but seeing the car in space is downright amazing.

It actually happened. Elon Musk, CEO of both Tesla Motors and SpaceX, successfully tested the most powerful rocket in recent memory. The Falcon Heavy lifted off from Cape Canaveral at 3:45 p.m. Eastern Time / 20:00 GMT, carrying a Tesla Roadster with "Starman" behind the wheel wearing a prototype SpaceX space suit. Also on board was a Hot Wheels car and special laser disc filled with all kinds of information on the human race, just in case some extra-terrestrial visitors decide to check the Tesla out as it travels to a solar orbit near Mars. Barring anything catastrophic, it should stay there . . . for a billion years.

The only bit of bad news came with the loss of the core booster, which didn't land safely on the autonomous ocean platform as planned. The Verge reports the booster failed to ignite two of its three descent engines, causing it to crash into the water. The two side boosters, however, returned to the Cape in spectacular fashion with a simultaneous touchdown.

This marks a new milestone for humanity and space travel, and we'll be the first to admit Motor1.com is full of space nerds. That's why we spent hours after the launch watching the red Roadster and its occupant boldly going where no car has gone before, via a livestream from SpaceX. In that time, it's amazing to see how far the Roadster went.

We grabbed a few screenshots through the day, and we're not ashamed to admit it – seeing the car with the Earth in the background is both awe inspiring and moving. Maybe that's because we love cars, and silly as it may sound, watching the Tesla in space is almost like being up there with it. Check our gallery of screenshots below.