A McLaren P1 Priced For The Masses - Finally 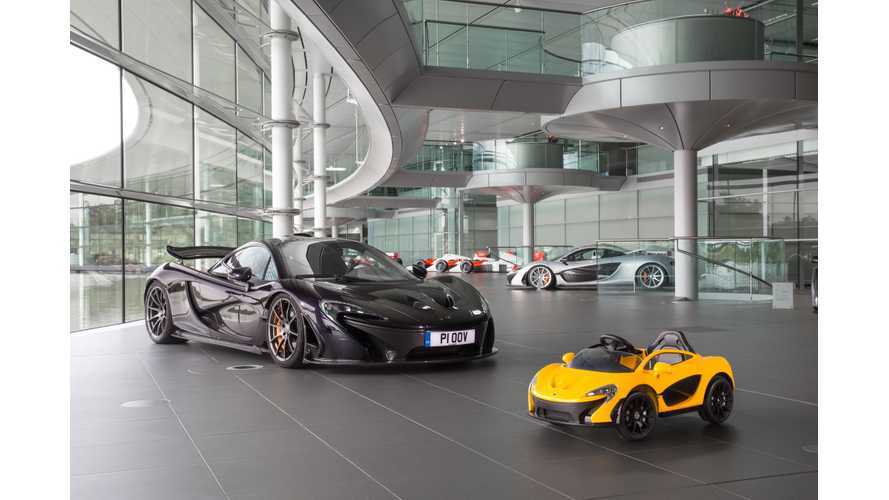 The new "Foot-to-floor" edition costs as little as $47.

Christmas is about a month away, but McLaren wants to make sure parents with kids aged less than three years old will have sufficient amount of time to buy the latest edition of the P1 hypercar. Gone is the highly complex plug-in hybrid power-train as instead the downsized machine relies solely on foot power.

McLaren will kick off sales of the P1 “foot-to-floor” edition from December and the toy car is going to be initially available in the U.K. at This Is It Store where it will retail for just £35.99 (about $47). Painted in Volcano Yellow just like the real deal, the latest pint-sized version of the company’s flagship model joins a wide array of licensed models and products inspired by the P1, which is celebrating its fifth anniversary these days.

Those willing to spend more can opt for a fully electric “ride-on” McLaren P1 we reported on about a year ago, that will top out at 3 mph (5 kph). Also finished in Volcano Yellow, this zero-emissions variant for children costs £219.99 ($288) at Toys R Us in the U.K. Another way to go would be the McLaren P1 Tecnomodel resin collectible that will set you back £345.00 ($451).

For the children who have everything and are harder to please, an intricate hand-made scale model that took roughly 3,000 hours to develop is available at Amalgam for a cool $7,440. Built on a 1:8 scale using the original data provided by McLaren, the limited-edition P1 features a retractable rear spoiler and doors that open. It takes an impressive 310 hours to build it and can be fully customized inside and out if buyers go for the $9,840 Bespoke Plus version.

Should you want to buy one of the 375 units of the actual McLaren P1, several examples are up for grabs all over the world. There’s one in The Netherlands for the equivalent of $1.94M and a rare Carbon Series model in Dubai that costs a whopping $3.5M.