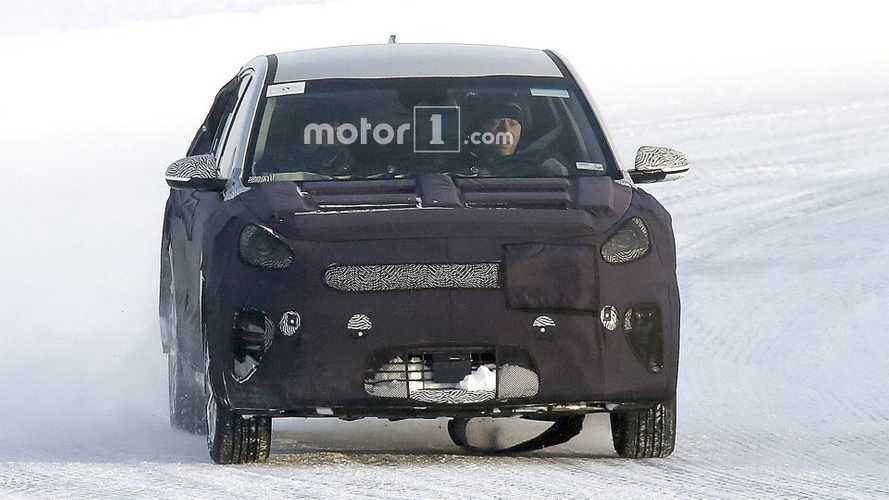 No exhaust pipes, no ICE. This is the purely-electric Niro crossover.

Our spies were at the right place at the right time to capture two heavily camouflaged prototypes of the all-electric Kia Niro EV, set to debut before the year’s end. This time, the South Korean company’s test drivers were kind enough not to give us the one-finger salute like their colleagues did back in November last year.

The bad news is the vehicles are still testing with a lot of disguise, but a couple of signs tell us they are indeed electric Niro test cars. Just take a look at the aerodynamically-shaped wheels and the grille-less front end and you’ll easily recognize it’s an EV. Also, the prototypes lack exhaust pipes at the back.

Interestingly, one of the two prototypes recently photographed probably had bad time testing in the heavy snow, as the plastic under engine cover seems to be half detached from its mounts. Adding the amount of snow between the front bumper and the cloth camouflage, the car might have had a minor accident.

Kia’s second all-electric crossover in addition to the Soul EV will adapt the electric hardware of its Hyundai Ioniq Electric cousin, which means it will get a 118-horsepower (88-kilowatt) synchronous electric motor. The Ioniq EV has an average range of 124 miles (200 kilometers) on a single charge, so we expect to see similar numbers for the zero-emissions Niro.

The production Niro EV was previewed by a concept during the Consumer Electronics Show in Las Vegas earlier this year. Naturally, the interactive lighting system that’s replacing the radiator grille will be replaced by a more traditional plastic cover in the transition to a mass-production vehicle, but the study gives a good idea of what the Niro EV will look like.

The electric crossover is part of Kia’s major EV push, which includes no less than 16 purely-electric or electrified models by 2025.