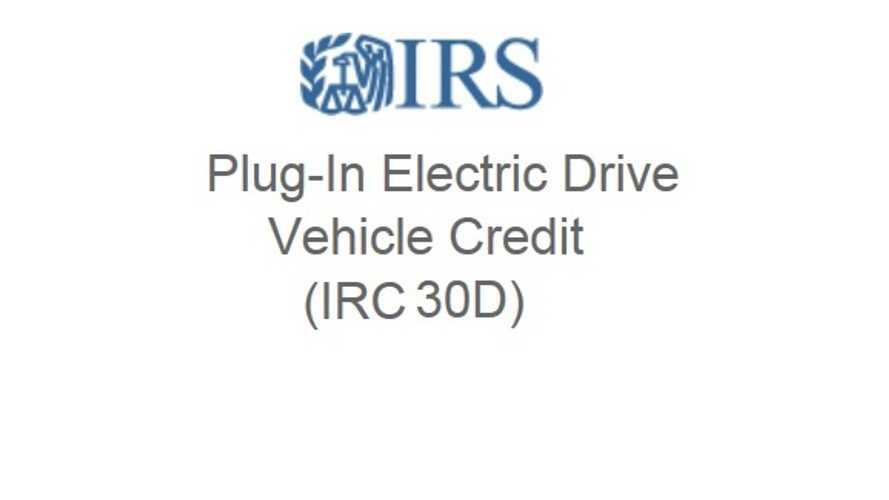 Least affected (but still devastated) by the removal of the $7,500 federal EV credit would be GM, estimated to finish 2017 with some 167,000 plug-in vehicles sales already made.

A new Republican House tax bill includes a proposal to effectively and immediately remove the $7,500 federal tax credit system that is in place to encourage the adoption of electric vehicles in the US.

Color us not surprised.

If enacted (and considering the track record of the House that is far from a sure thing), all qualifying plug-in purchases after December 31, 2017 would no longer be eligible for any incentive from the Fed.

Truthfully, the alteration (and ultimate removal) of the current federal EV credit system was not unexpected, as the first US automakers are rapidly approaching the individual 200,000 vehicle threshold that triggers a gradual elimination of that credit for the OEM.  There was no way the likes of Honda, Mazda and Chrysler would have be allowed to benefit from having not sold plug-ins in any volume of consequence the past decade

Currently GM stands at 158,144 deliveries of plug-in vehicles in the US through October, while Tesla stands at some 148,000+ plug-in deliveries.  By year's end, GM should be around 167,000 sales, while Tesla just over 160,000.  (See the current and historical monthly totals for all plug-in sales in the US on our monthly scorecard here).

How The $7,500 Phaseout Of The Federal Credit Works...today anyway

With that said, under the previous administration, the assumption was that the $7,500 EV incentive program would be revised to make it a gradual phase-out over time for all automakers (or a complete reboot of the program with the amount of the incentive increased).

However with the new administration, which has been non-too-friendly when it comes to environment issues (see Scott Pruitt installed as EPA lead as evidence as such), we knew an outright attempt to eliminate the EV credit, as well as many other "green" programs would be forthcoming (this proposal also includes GOP plans to end other energy tax credits, including solar, geothermal, fuel cell, wind energy, etc.).

The removal of the $7,500 federal tax credit, could mean many future Tesla Model 3 buyers expecting the credit will now lose out.

While Tesla is indeed closing in on the 200,000 net plug-ins sold, it will likely be affected the most on a 'net demand' basis.  With a plan to build upwards of 5,000 Model 3 sedans/per week by the end of Q1 2018, and up to 10,000/week later in the year - almost of which to the US, the cost to would-be Tesla owners, and the company itself could be upwards of some 250,000 lost future credits (and the potential of many lost reservations).

Will this proposal get through the Senate and come to pass?  Or will it be horse-traded away for the wider tax cut plan?  There has already been a 'call to action' by many advocacy groups to save the incentive.

Even the Alliance of Automobile Manufacturers, a working title most of the major automakers use when they want to do things like attempt to remove EPA fleet MPG standards, isn't in favor.  Spokesperson Gloria Bergquist said:

”The potential elimination of the federal electric vehicle tax credit will impact the choices of prospective buyers and make the electric vehicle mandate in 10 states - about a third of the market - even more difficult to meet."

The key to their objection is in the second part (that we highlighted in bold).

While the federal government can operate as it pleases, so can CARB...and those minimum requirements for ZEV (zero emission) credits aren't going away even if the federal credit does; the reverse may happen, and they could strengthen.

But rather, CARB standards are set to significantly increase, starting with 2% of total sales in 2018 (up from .79% from 2012-12017), then 4% in 2019, up to almost 16% in 2025.  Loosely translated, the Alliance is saying, 'if you take away that $7,500...we will have to eat that amount (+ some to get lease payments equalized) to hit our mandated all-electric vehicle targets'.  So this proposition, as it stands, doesn't have a lot of friends outside the government officials themselves.

2018 Nissan LEAF priced from $29,995...but without a federal credit encouraging sales, Nissan could also be making up to $20,000 in back-channel payments by selling excess CARB credits

On the flip-side of the lost sales and federal incentives, an immediate unseen 'back channel' EV credit business for today's over-producing BEV makers would immediately be born (which has long been why we have felt Tesla CEO Elon Musk has never been too vehemently opposed to the prospect).

As an example, even though Tesla would lose out on the incentive for its upcoming Model 3, each one of Tesla's excess ZEV credits (as well as for Nissan who have a bunch extra themselves) would immediately be worth their full-value (~$5,000 a pop) to other non-compliant OEMs with no shot at hitting the CARB numbers.

“The EV tax credit repeal would cede U.S. leadership in clean vehicles, putting our companies at a competitive disadvantage and threatening jobs while costing drivers more at the pump and increasing pollution."

So is this the end of the federal EV credit?  Or will the House's plan ultimately change?  When tend to think the latter with a fairly high degree of confidnece, but changes of some form are definitely ahead...and the likely not the net positive kind.