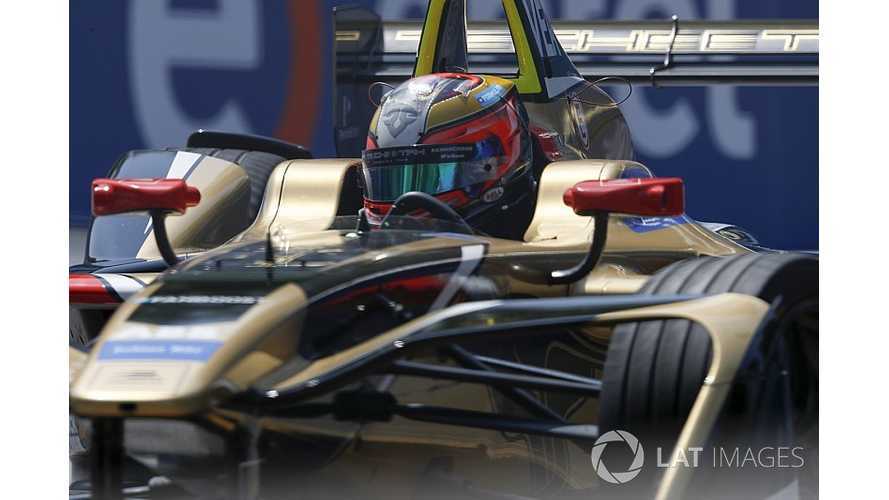 In an action-packed encounter, Sebastien Buemi grabbed third for Renault e.dams, but once again defending champion Lucas di Grassi was out of luck, retiring with yet another technical issue in his Audi.

Fourth place for Felix Rosenqvist and fifth for Sam Bird (plus the fastest lap bonus point) kept their championship challenge on track.

Vergne led away from pole position, but was under pressure into the first turn from Nelson Piquet Jr, who made a stunning getaway from fifth on the grid.

The Jaguar driver remained hot on the Vergne's tail, before the race was interrupted by the Safety Car as Jose Maria Lopez and Maro Engel had their cars retrieved following separate opening-lap incidents.

Piquet was caught napping at the restart, and over the first part of the race Vergne stretched out his lead to out to over 3.6 seconds by the time of the mandatory pit stop.

But by now it was Lotterer in second place, the German having pulled a slick move on Piquet into Turn 3.

This was the first race where there was no minimum pit stop time and Rosenqvist was the big winner leaping up from 10th place to fifth during the stops.

The big loser was di Grassi, whose car ground to a halt as he exited the pits, extending the miserable start to his title defence.

Bird stayed out a lap longer has rivals, but this didn’t work to his benefit as he slipped from fourth back to sixth.

With Vergne losing radio contact with his pit, he was forced to err on the side of caution with his energy use, and this meant that Lotterer closed right in.

On at least three occasions the teammates touched, including one heart-stopping moment when Lotterer hooked his nose over Vergne’s rear wing and pushed him into Turn 3.

Buemi and Piquet staged a great duel for third, with Piquet overcooking his braking into Turn 3 as he tried to reclaim the position.

As Vergne and Lotterer held each other up, Buemi, Rosenqvist and Bird homed right in for a nail-biting conclusion, but they held on to deliver the Chinese outfit a one-two finish.

“My lap trigger activated one extra lap – I’ve no idea how it happened – but basically during the race I thought I had to go one lap longer,” Vergne admitted. “So that was why I was under a huge amount of pressure from my team-mate. I didn’t know I had a problem and I couldn’t understand how they all could be that quick and still finish the race!”

Piquet and Mitch Evans took sixth and seventh for Jaguar, while Jerome D’Ambrosio was another big winner in the pits and scored his first points of the season for Dragon in eighth.

Antonio Felix da Costa was ninth for Andretti, while Nico Prost rounded out the points in the second Renault e.dams entry.

The inaugural ABB FIA Formula E Antofagasta Minerals Santiago E-Prix is over... And here's how it turned out! Join the pit lane party as we review our first ever Chilean adventure.