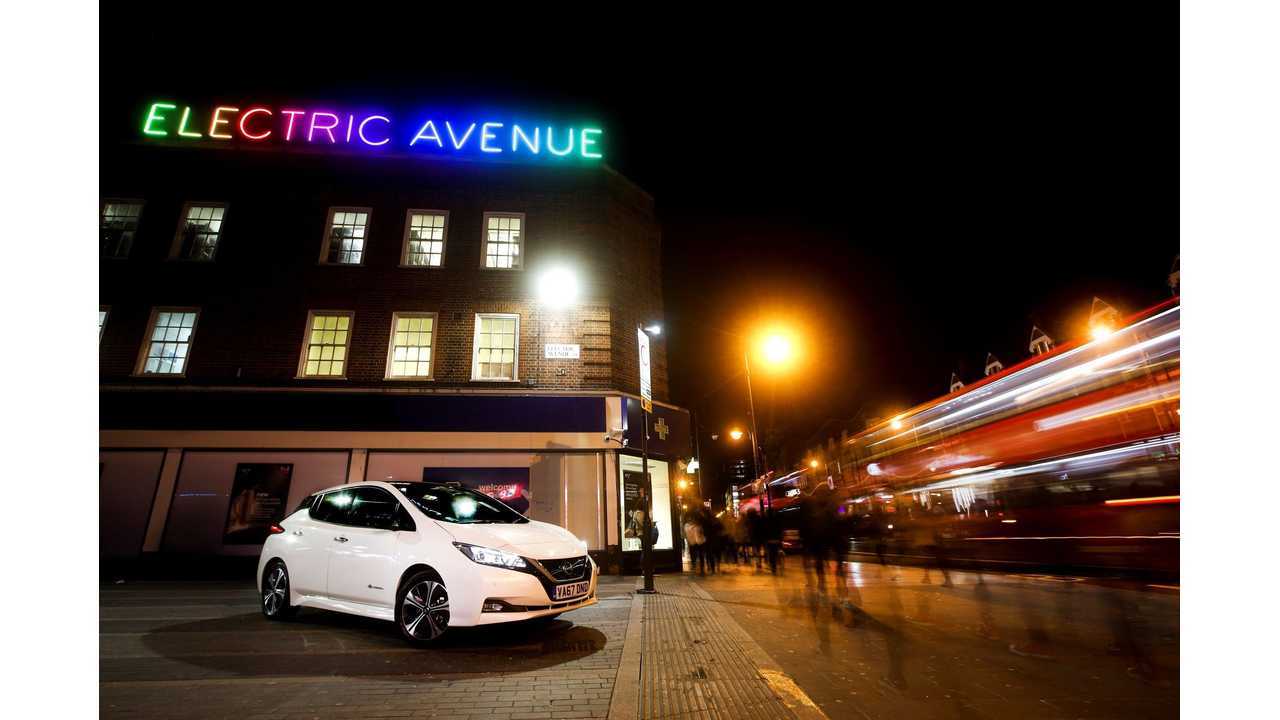 New Nissan LEAF turns up the charge at electric avenue

Nissan began general sales of the new LEAF in the UK on February 2nd (although the first was delivered on January 31) by presenting its latest EV on Electric Avenue in Brixton – the UK’s first electrified shopping street.

The crossroads of London’s first electrified street and one of its most polluted, Electric Avenue and Brixton Road in Lambeth, is one of the most suitable places for EVs.

London suffers serious problems with pollution and congestion, so step by step the city is making access more expensive to ICE.

In the future, electric avenue will maybe expand to become an electric city.

"The fully electric vehicle (EV), which delivers zero emissions whilst driving, goes on sale in the same week that London’s air pollution reached the annual legal limit for nitrogen dioxide (NO2) – just 30 days into the year.

Brixton Road in Lambeth broke the hourly air pollution limit 18 times during January. EU rules state that a single location in the UK can only break the limit 18 times in a year.

Brixton’s Electric Avenue, a landmark market street in South London, provided the perfect backdrop to capture the next generation of the best-selling Nissan EV. Constructed in the 1880s, Electric Avenue was the UK’s first shopping street to be lit by electricity – revolutionary at a time when gas lamps were the norm.

Fast forward to 2018 and London is taking a new focus on electrification. TfL and the Mayor of London are encouraging the use of electric vehicles to lower emissions and tackle London's polluted air. In 2017, Transport for London (TfL), London Councils and the Greater London Authority (GLA) announced almost £4.5 million in funding for the installation of electric vehicle charging infrastructure on London's streets to support drivers wanting to switch to zero-emission vehicles.

A £10 ‘Toxicity Charge’ or T-Charge was also introduced in October 2017 in the Congestion Charge area for vehicles that fail to meet minimum Euro emission standards. Electric vehicles, such as the New Nissan LEAF, are exempt from both the daily T-Charge and London Congestion Charge and will also be able to drive freely in the new Ultra-Low Emission Zone (ULEZ), when it comes into force in April 2019."

“We are delighted that the new Nissan LEAF is now on sale across the UK. Much more than just an EV, the LEAF is a whole new driving experience, designed to move people with greater exhilaration, confidence and connection to the world around them.

Nissan looks forward to EVs playing an increasingly important role in the sustainable development of our urban infrastructure – not just improving air quality, but also in the storage, management and distribution of renewable energy.”