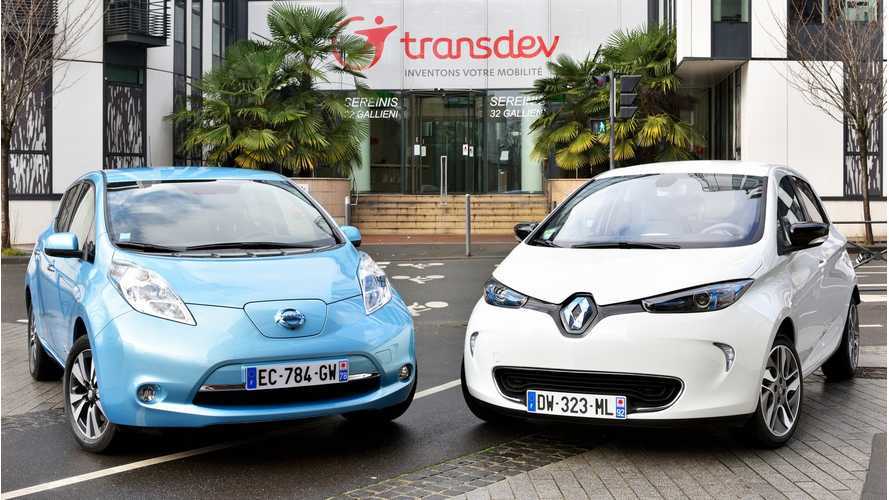 The Renault-Nissan-Mitsubishi Alliance sold 10,608,366 cars in 2017, which works out to one out of every nine passenger cars and light commercial vehicles sold worldwide. Overall, sales for the Alliance  increased by 6.5% last year, making it the world's largest automotive group.

But we don't care about general sales. We're only interested in plug-ins.

All-electric car sales is grew even quicker for The Alliance at 11% year-over-year to 91,000 units last year.

That's just over 0.85% of total the result, but hopefully 1% will be exceeded this year.

Year 2017 ends with a cumulative result of 540,623 all-electric cars sold by the Renault, Nissan, Mitsubishi brands since 2010, although we must remember that Mitsubishi is a new partner in the alliance.

“With more than 10.6 million passenger cars and light commercial vehicles sold in 2017, Renault-Nissan-Mitsubishi has become the number-one automotive group worldwide. This evolution reflects the breadth and depth of our model range, our global market presence and the customer appeal of our vehicle technologies.”

About the EV sales:

"Since 2010, when the Nissan LEAF was first introduced, Renault-Nissan-Mitsubishi has sold 540,623 electric vehicles worldwide through its different brands. Cumulatively, the Alliance continues as the global leader for 100% electric passenger cars and light commercial electric vehicles.

The Nissan LEAF, the first mainstream, mass-marketed electric vehicle, remains the world’s best-selling EV with more than 300,000 vehicles sold since its launch in December 2010.

During 2017, the new Nissan LEAF was unveiled and offers customers greater range, advanced technologies and a dynamic new design. It went on sale in Japan last year, and will be rolled out in other major markets during 2018. The new Nissan LEAF received over 40,000 orders globally including 13,000 orders in Japan; 13,000 reservations in the United States; and over 12,000 orders in Europe.

In addition to the LEAF, Nissan’s e-NV200, a light commercial vehicle sold mainly in Europe and Japan, has also recently been upgraded with an additional 100km of driving range in Europe.

In 2017 Renault remained, for the third consecutive year, the leader in Europe’s electric-vehicle segment with a market share of 23.8 percent and sales volumes increased by 38 percent. Renault ZOE was the best-selling EV in Europe, with sales increase by 44 percent.

The Renault-Nissan-Mitsubishi Alliance operates in nearly 200 countries under ten brands: