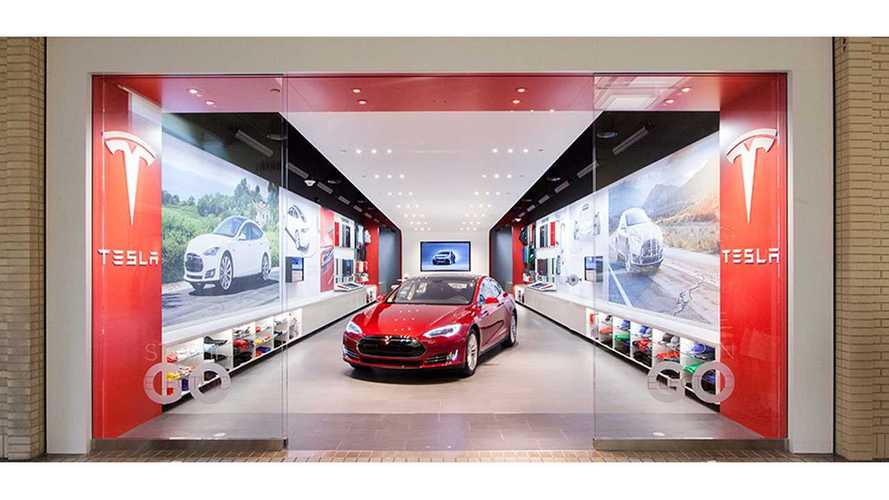 As we previously reported, Tesla had opened a small boutique/showroom inside of a Nordstrom store during the holidays last year. It was more like a closet than a store, however, we learned that the automaker had plans to open a stand-alone store outside the mall at a later date. Just three weeks ago we reported that the store was underway and set to open soon.

The new store is located in the high-rent Somerset Collection Mall on Big Beaver Road in Troy, Michigan. Unlike the small room that Tesla inhabited inside of Nordstrom (that barely fit a Model X), this is a full-scale building situated in a strip mall area. The Detroit News wrote:

"Think of it as an Apple store — except with cars."

In fact, it's located right next door an Apple Store. On the other side of Tesla's new 2,200-square-foot gallery is a Macy's. For now, the store will showcase a Model S and X. Hopefully, we'll get a Model 3 in there at some point. It also displays the company's solar and battery storage products. A company spokesperson shared:

“We are excited to expand our presence in Michigan in order to educate consumers about the benefits of Tesla’s vehicles in a fun and engaging environment. Tesla’s new gallery at the Somerset Mall allows anyone interested in Tesla, including the thousands of Model 3 reservation holders in Michigan, to learn about our technology.”

Unfortunately, the laws have yet to change in Michigan, but recent forward progress shows promise. The Silicon Valley automaker still can't sell its vehicles in the state. The automaker can't even speak to prices or offer test drives. Orders must be placed online, and according to The Detroit News, this is also true for the company's energy products. A Tesla spokesperson elaborated:

“It’s unfortunate that Michigan law takes away rights from consumers in order to protect local car dealers. Tesla continues to fight against that law so that Michigan consumers can enjoy the freedom to buy cars as they wish.”

The Detroit News points out that buyers can take delivery at neighboring states' stores, including those in Cleveland or Chicago. Cars will be serviced via the automaker's mobile repair service. Otherwise, a trip to Illinois or Ohio would be necessary.

Once we enjoy an opportunity to personally visit the new Tesla store in Michigan, we will share more information and photos.