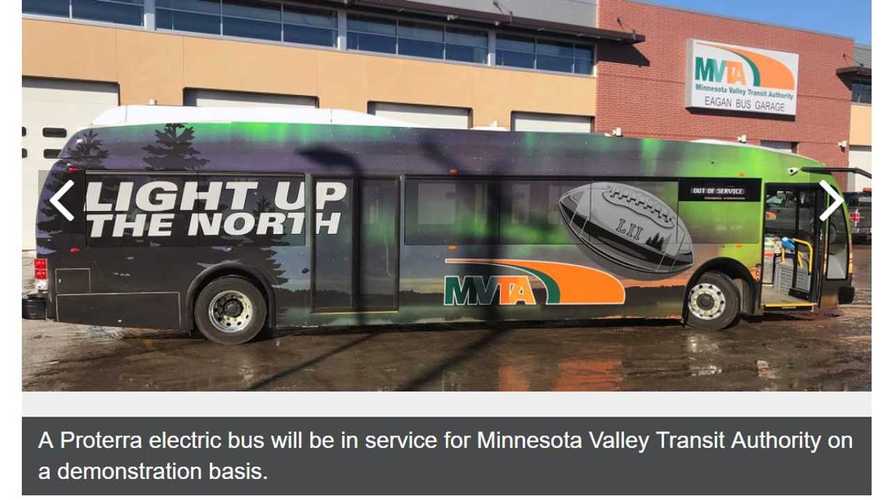 This year, Super Bowl LII will be more electrifying than ever as the Minnesota Valley Transit Authority (MVTA) will deploy a 40-foot all-electric Proterra Catalyst E2 bus as a special shuttle.

Proterra was selected to take on this job for Super Bowl week (from Friday, January 26 through February 4 on Super Bowl Sunday) in freezing temperatures.

This should be a huge boost for electric buses, as few if any exist in Minnesota right now. We hope to see the shuttle on screen during Super Bowl LII festivities this weekend.

You can find details for the electric bus schedule here.

"The routes are scheduled to run during rush hour and weekend peak hours, shuttling customers from popular destinations such as the Mall of America, the University of Minnesota and Minneapolis, Cedar Grove and Burnsville Transit Stations. Beginning on Friday, January 26 through February 4 on Super Bowl Sunday, the Proterra bus will operate during freezing temperatures. The vehicle’s performance remains reliable through extreme weather because its E2 battery system includes active thermal management which monitors battery cell temperature and voltage, with more than 70 sensors capturing 160 different diagnostic data streams from each battery pack. Unlike other electric bus technologies, the Proterra battery integrates liquid cooling and proprietary state of charge algorithms that enable long life, rapid charge times and operation in virtually any climate.

MVTA chose the Proterra Catalyst E2 because of its proven transit performance in other similar climates such as Worcester Regional Transit Authority in Massachusetts and Park City Transit in Utah. The Catalyst E2 is ideal for MVTA driving conditions because of its purpose-built electric bus design, energy-dense batteries and efficient drivetrain. Proterra recently broke the world record for range, achieving 1,101.2 miles on a single charge utilizing E2 battery technology."

“As thousands of people flock to the Twin Cities for the Big Game, it’s paramount that we deliver on our promise to provide reliable, high-performance transit to all of our riders. By deploying the Proterra® battery-electric bus during the busiest week of the year, we will share this state-of-the-art technology with travelers from near and far.”

“With thousands of visitors coming to town, this was the perfect time to team up with MVTA and demonstrate the Catalyst E2 vehicle’s unique cold-weather performance capabilities. To compete in the transit market, we’ve placed great emphasis on designing for durability, and we’ve created a drivetrain and battery system that completely outperforms conventional fossil-fuel powered drivetrains in every major performance category. We’re excited to support MVTA and our transit partners as they redefine what it means to move the masses.”