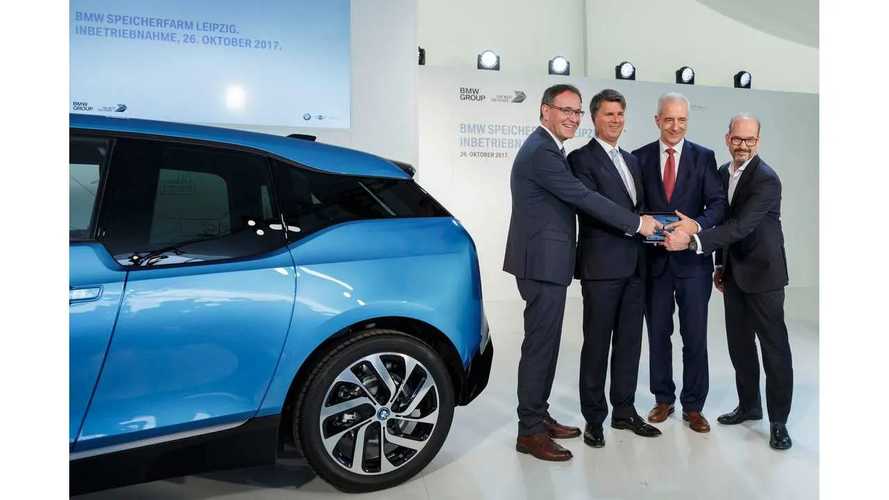 BMW has just reached the 'coming of age' milestone of producing it 100,000th i3 from the company's assembly facility in Leipzig, Germany. The i3 has been produced there since late 2013, and recently received a quasi-face lift for the 2018 model year and also the introduction of the slightly sportier i3s version (and also a range bump prior to that for the 2017 model).

As the BMW Group is now approaching another cumulative milestone for total plug-ins sold at 200,000, the i3 still stands for the majority share under the BMW banner.

The BMW Group continues to build on its leading international role in the field of electro-mobility, as the 100,000th BMW i3 rolled off the production line at the company’s Leipzig plant today. The BMW i3 has played a major part in making the BMW Group one of the most successful suppliers of electrified vehicles worldwide.

In 2018, the BMW i sub-brand will be expanded by i8 Roadster, based on the i8; with a performance and range bump over the original i8 for both.

At the same time, BMW officially commissioned the BMW Battery Storage Farm Leipzig, which will ultimately connect up to 700 BMW i3 high-capacity batteries as an energy storage produce. Today, 500 new and used pack are already installed.

Harald Krüger, Chairman of the Board of Management of BMW AG said:

“We are proud of the 100,000th BMW i3 built by our plant in Leipzig. The BMW i3 is the original, a true technological pioneer. With BMW i as our spearhead, we intend to remain the leading premium supplier of electro-mobility going forward. We are now looking ahead to the next member of the BMW i family, the i8 Roadster, which will expand our leading position in the field of electro-mobility. In 2025, we will offer our customers a total of 25 models with electrified drive trains. In the interests of sustainability, today we are also presenting a concept for the second use of BMW i3 high-voltage batteries. With our Strategy NUMBER ONE > NEXT, we are looking far beyond the car itself and driving change in our industry with totally new approaches and business models.”

“We are proud of our team performance, which enables us to celebrate production of the 100,000th BMW i3 today – all with the same premium quality and efficiency as our more conventional models. I would like to thank all our associates for this tremendous achievement,”

More about the Battery2ndLife project:

The official commissioning of the battery storage farm on the grounds of BMW Plant Leipzig demonstrates innovative, sustainable and profitable second use of BMW i3 batteries after a vehicle reaches the end of its lifecycle. The battery storage unit in Leipzig can house up to 700 used BMW i3 high-capacity batteries. There are currently 500 new and used batteries integrated, because today – four years after the BMW i3 market launch – most battery packs are still in cars on the road. “The capacity of 700 high-voltage batteries is the equivalent of an electric range of 100,000 km in a BMW i3. The scalable approach means that the storage unit could be further expanded to accommodate more batteries. It is also already compatible with upcoming battery generations and therefore future-proof,” underlined Joachim Kolling, Head of Energy Services at the BMW Group. “We are demonstrating once again that the concept of sustainability at BMW i goes far beyond the car.” With wind turbines located on the grounds of the plant, the BMW Battery Storage Farm Leipzig links decentralised captive production from renewable energies with local energy storage and an industrial consumer in a completely unique way. The stationary battery storage farm is also integrated with the public power grid, which enables its electricity to be marketed as primary balancing power. In this way, the BMW Group is making a contri-bution to the stability of the public power grid and performing a valuable function for the wider community. When there is a surplus of power from renewable energies, large-scale battery storage can relieve the grid by absorbing electricity. When there is not enough power in the electricity grid, the facility can release electricity to help stabilise the grid.