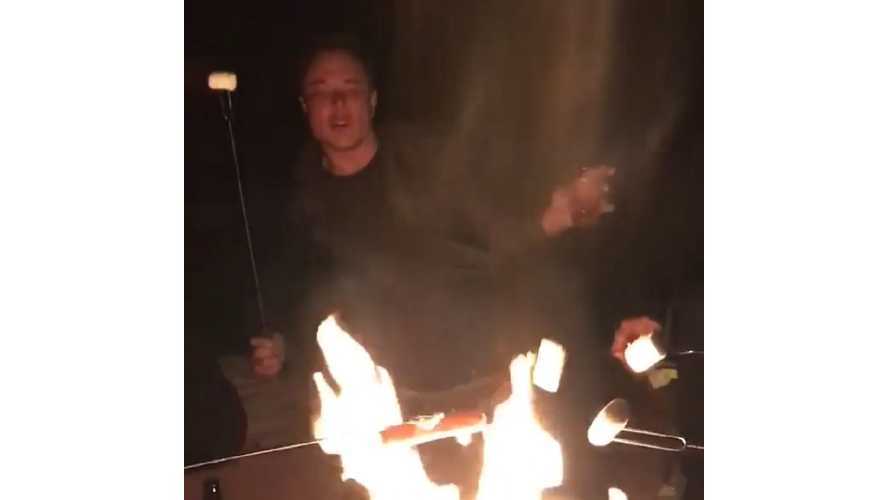 It turns out camping on the Tesla Gigafactory roof is a better option for busy CEO Elon Musk than heading to a hotel.

We all know that Elon Musk is a bit of a workaholic. This has probably accelerated as of late, with the Model 3 production bottleneck issues and "production hell" in general. Add to this the fact that Tesla is using a significant amount of resources to help those in Puerto Rico without power. Just the other day, the automaker brought a children's hospital back online in the struggling U.S. territory.

Late the other night, Musk posted a picture of himself and a few others enjoying a bonfire atop the Tesla Gigafactory. It's no joke, they actually built a campfire on the roof:

Campfire on the Gigafactory roof

It seems the party was still well underway hours later, or Musk just waited to post a video. The group was enjoying marshmallows, cold hotdogs, s'mores, whiskey, and a little Johnny Cash. Yes, as you can see, Elon is dancing in his seat while lipsyncing to the famed "Ring of Fire" and toasting his team:

Whiskey, fire, s’mores and JC Also, hotdog or not hotdog?

At the time of posting, Musk likely thought that sharing the adventure was a great idea. Heck, it's silly, fun, and outright hilarious. One reason the popular CEO is so well-liked among many is that he's "real" and "candid", taking to social media to share such life events.While Musk and friends seemed to be enjoying themselves taking a load off beneath the stars, there was more to the story, which the CEO felt compelled to share the next day.

Perhaps Musk got a little flack for the event. It does seem a bit strange that he would be partying it up all night long and building a fire on the roof of a building when Model 3 production is struggling. But, everyone deserves a break and a little time to unwind right? He surely puts his time in.

He was actually camping out on the Gigafactory roof so as not to have to drive all the way to and from Reno for a hotel. So, Musk's antics were actually in an effort to save time and have more hours for working. Obviously, he needs all the extra hours he can muster right now, as he's upped his new favorite catchphrase to "Production hell, ~8th circle".

Btw, just want to express a word of appreciation for the hard work of the Tesla Gigafactory team. Reason I camped on the roof was because it was less time than driving to a hotel room in Reno. Production hell, ~8th circle …