The Tesla Semi Weighs In - Part 3 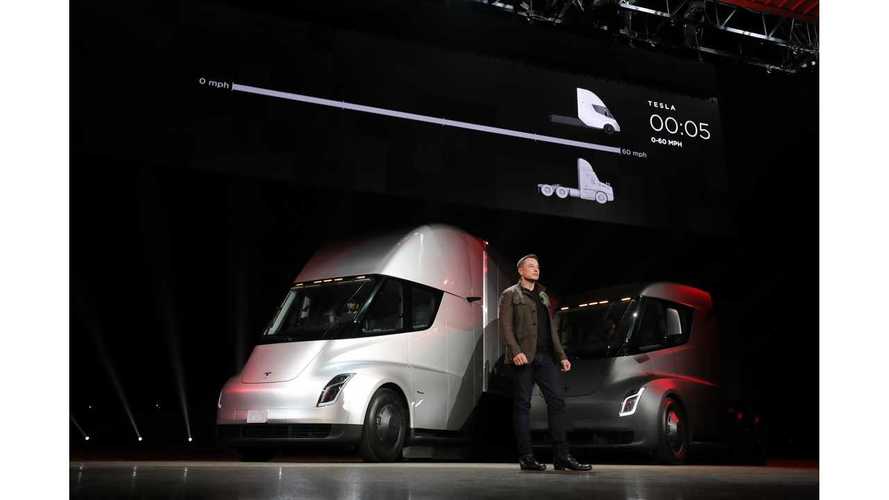 Like wrestling and boxing, you can’t play the commercial trucking game if you don’t “make weight” for your class. The Tesla semi wants to join the Class 8, 80,000 lb division. To compete, Class 8 semi-tractors have to “make weight” while hauling a 15,000 lb trailer and 45,000 lb freight payload. Most of the current-generation aero line-haul diesel tractors weigh-in at 19,000 lb and carry 700-1,400 miles worth of fuel onboard. To be competitive, Tesla has to weigh-in at no more than 20,000 lb while carrying (from George’s battery pack article) a 9,500 lb, 500-mile-range battery pack.

*This is the third of four articles on Tesla’s semi truck. Links to other related articles below:

To “make weight” with that pack, Tesla took the conventional semi-tractor concept and put it on the “Tesla Semi Diet.”

Fortunately, “lightweighting” is a growing trucking-industry trend and various off-the-shelf techniques are now available. Lighter tractors mean either more billable payload capacity or lower operating costs. Truckefficiency.org’s lightweighting white paper describes these techniques and approximate weight savings. Based on what we’ve seen from the Tesla reveal and walk-around videos, we know or can make educated assumptions about what Tesla has done to “make weight.”

Tesla revealed their Semi as a day-cab without a sleeper. Walk-around videos confirmed super-single driver wheels/tires on the white line-haul version and individual Model-3-style drive motors for each driver wheel. The suspension appears to be a conventional semi air-suspension.

We noted the Tesla Semi uses many of the same aero-features now used on state-of-the-art Class 8 diesel tractors such as the Kenworth T680 illustrated on the “Tesla Semi Diet” illustration, Air dams, Chassis fairings, Trailer gap-reducing side extenders, and Driver wheel covers or disc hubcaps.

Diesel engines, fuel, transmissions, and accessories all add up to a lot of removed weight when converting to an electric drive. Note also that the all-electric Tesla Semi also eliminates the “DEF” tank and fluid. Most current-generation diesel engines must inject a water-urea solution called “Diesel Exhaust Fluid” (DEF) in the exhaust to reduce EPA NOx emissions. The urea functions similarly to an automotive catalytic converter in converting the NOx to water and nitrogen.

And, the most rewarding weight component to remove? The 200 gallons of diesel that must be re-purchased over and over and over as it is poured into the engine and converted to CO2, NOx, and particulates throughout a diesel tractor’s life.

But, what comes out must go back in. Though electric motors, gearboxes, and accessories are much lighter than their diesel equivalents, the portly 9,500 lb battery in the belly negates about all of the weight savings.

Adding a new electric propulsion system to the stripped-down Class 8 “glider”, we estimate the 500-mile range Tesla semi comes in right around 20,000 lb – the upper limit to guarantee capacity to haul a “regular” payload and trailer without exceeding the Federal 80,000 lb Class 8 weight limit. The 300-mile range version, with a smaller 510-kWh (estimated) battery pack, weighs in at a slim 16,000 pounds. Almost light enough for welterweight.

*George Bower contributed to this article.