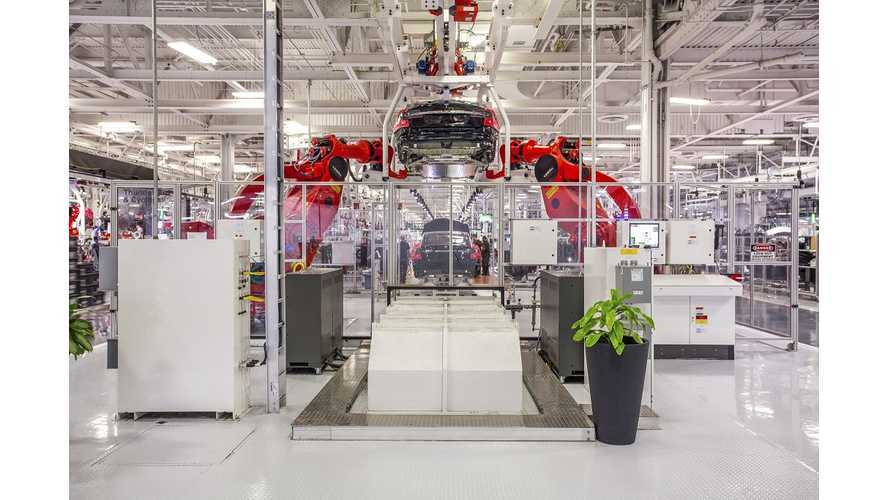 Everyone who takes the Tesla factory tour is amazed by the gigantic machines and the eerie dance routine performed by the hundreds of robots. Few realize that they’ve only seen half of the manufacturing going on in the vast building. The Fremont factory’s “secret” second floor is where the company builds many of its battery, power electronics, and drivetrain systems.

In a recent Wired article, Greg Reichow, who was Tesla’s VP of Production during the historic transition from low-volume Roadster production to the highly automated assembly of Models S and X, offers some fascinating insights into this part of the manufacturing process. No, he doesn’t offer a tour of the secret inner sanctum, sorry. Tesla’s deepest and darkest secrets will remain dark for now. However, Reichow does offer some interesting insights into the company’s reasons for building certain key components of its vehicles in-house.

For decades, automakers have been outsourcing more and more of their manufacturing. Most modern automobiles are assembled from parts made by hundreds of suppliers in countries all over the world, and in some cases, even the final assembly is done under contract by companies such as Magna and Valmet. Tesla has reversed this trend - Reichow describes it as “more vertically integrated than any car company since the heyday of the Ford Rouge plant in the late 1920s.”

That wasn’t the original idea. As Marc Tarpenning told me in 2013, when he and Martin Eberhard started working on an electric car, they were confident that they could make the drivetrain. “That’s Silicon Valley stuff - computers and batteries. But I was extremely concerned with our ability to actually make a car because there are thousands of components and it just seemed like that was impossible. What I learned, by doing a bunch of research, was that the car industry had sort of re-factored itself starting in the 70s and that they had essentially gotten rid of everything except a couple of core things... So, that was what convinced me that this business was actually possible because we could buy from those same suppliers.”

Above: An illustrated look at the production process inside Tesla's Fremont factory (Image: Tesla)

However, once Tesla had demonstrated with the Roadster that it could build an EV that people wanted to buy, its ambitions grew. The goal became to build the best cars in the world. As Reichow explains, Tesla was redefining the way cars were designed and manufactured. It needed technologies that were not readily available, and it needed to move at Silicon Valley speed, which would seem like madness to most automotive suppliers.

Building its own core components allowed Tesla to make choices quickly. “Launching a new product presents a team with thousands of small decisions,” Reichow writes. “If you choose to outsource a component, you often need to send people to live in the factory for a prolonged period of time. Nothing beats the ability to have the full engineering team walk into the manufacturing area every day, talk to the people building the products, and gain insights on how to improve. Despite what many contract manufacturers promise, the reality of outsourced manufacturing is that you are getting on an airplane to solve problems you could otherwise solve by walking across your building.”

Building components in-house allows for faster cycles of learning and improvement. “The idea of bundling improvements and building them into the next platform every three to four years (the typical development cycle for the car industry) made absolutely no sense to us at Tesla,” Reichow writes. “Our approach at Tesla was to adopt improvements as soon as they were ready. This meant we were implementing up to 50 changes per week... This approach created minor inefficiencies in our manufacturing system. Yet what was more important: extracting a couple percentage points of manufacturing efficiency, or building a product that was rapidly improving and pulling farther ahead of the competition?”

Above: While thousands of humans work on Tesla's factory floor, hundreds of robots also pitch in to build the cars (Youtube: Business Insider)

By building components in-house, Tesla has gained a deep understanding of its products and how to improve them. As an example, Reichow describes the innovation that enabled Tesla to create Ludicrous Mode. “One of the constraints in increasing the power output of the battery in the early Model S was the safety fuse and switch system that was integrated into the pack. A fuse? How hard could it be to find a fuse that enables the increased current levels needed for this performance? It turns out that it is really hard to build a fuse that allows a massive amount of current to flow during normal operation while also protecting the car in milliseconds if there’s an abnormal spike in current flow. Building fuses in-house helped us solve this problem.”

Of course, developing parts internally is not always the right answer - there are good reasons why automakers outsource, such as leveraging the proven technologies and efficient supply chains of large contract manufacturers. According to Reichow, outsourcing makes sense for commodity items that will not change significantly, but for products that contain unique intellectual property or that are expected to change quickly, building in-house can be the best choice.

Tesla sometimes employs a layered capacity strategy - it starts by building a product with its own small manufacturing operation, using this pilot line to develop an understanding of what it takes to build the product. As capacity scales up, production can be outsourced to contract manufacturers.