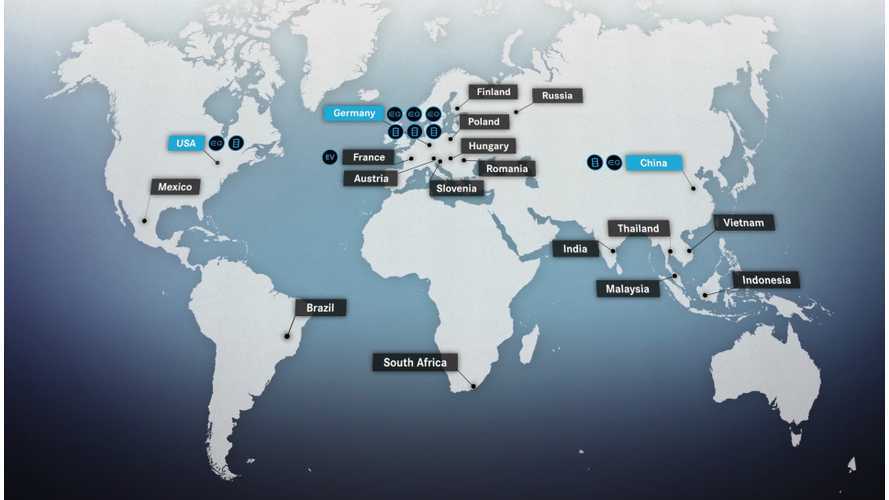 Daimler will invest some 10 billion euros in electromobility to electrify the entire portfolio of Mercedes-Benz and introduce more than 50 electrified vehicle variants by 2022 (including more than 10 BEVs).

The German company is preparing a total of six plants on three continents (five for the next-generation EQ models and the sixth is the Hambach factory in France where the smart ED is produced). The EQ assembly plants will be:

Daimler is keeping its battery pack assembly process in-house too. Soon there will be five battery packs production plants (each ready for export if needed):

The first model is to be EQC all-electric SUV in 2019 made in Bremen and at BBAC in Beijing.

Daimler subsidiary ACCUMOTIVE - second battery factory in Kamenz - fourfold increase of production and logistics area up to around 80,000 m2;

Markus Schäfer, Member of the Divisional Board of Mercedes-Benz Cars, Production and Supply Chain said:

“Our electric vehicles will be built in six plants on three continents. We address every market segment: from the smart fortwo seater, to the large SUV. The battery is the key component of e-mobility. As batteries are the heart of our electric vehicles we put a great emphasis on building them in our own factories. With our global battery network we are in an excellent position: As we are close to our vehicle plants we can ensure the optimal supply of production. In case of a short-term high demand in another part of the world our battery factories are also well prepared for export. The electric initiative of Mercedes-Benz Cars is right on track. Our global production network is ready for e-mobility. We are electrifying the future”.