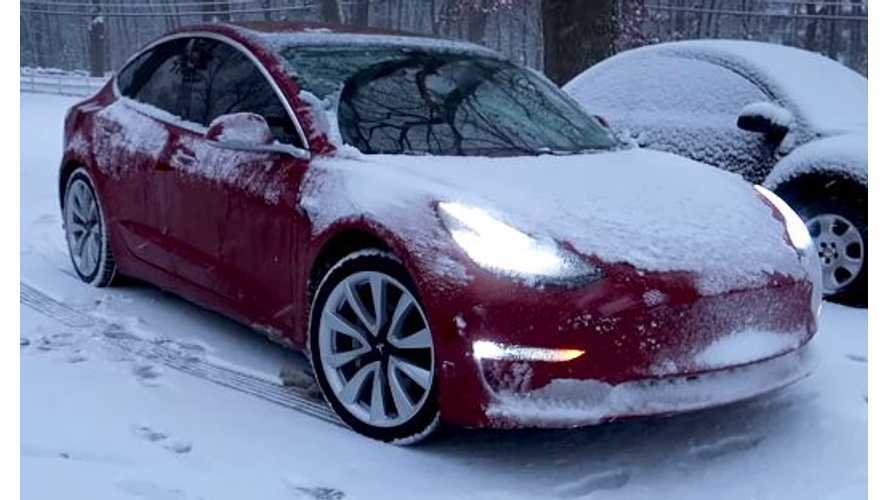 Check out this unique cabin heating test that compares a Tesla Model 3, Nissan LEAF (gen-1), and a Honda Civic (ICE).

The guys over at Now You Know (father and son duo, Zac and Jesse) have been making a multitude of videos, many of which feature their new Tesla Model 3. They got the car just before the holidays and ran the "12 Days of Model 3" series. Their videos tend to be fun, up-close and personal, and a bit less mainstream than much of what's out there.

Nissan LEAF in the snow

In this video, the team races to the vehicles because it's relatively cold outside (11F/-12C) and they're wearing t-shirts. None of the cars have been pre-heated. They don't actually start the vehicles until they're inside, and then they give us a first-hand account of how the heating system, heated seats, etc. are working. Added to this, they have a timer running and they continuously take temperature readings from various areas inside of each car.

In general, they come to an obvious conclusion that any car really needs a good ten minutes of warming up before you will begin to experience comfortable temps. They find that the Honda Civic takes longer than the Tesla Model 3 to warm up, however, it doesn't have heated seats, so that puts it at an immediate disadvantage. Nonetheless, temps coming from the HVAC system are still colder for a longer period of time than they were in the Model 3.

The first-generation Nissan LEAF does a really nice job heating up. In fact, it appears that it gets hotter quicker than the Model 3. However, there's a significant amount of battery loss in a very short period of time. Considering the fact that the car already has a more limited range than the Model 3, you may not be able to heat it for long periods of time in cold weather if range is a concern for you.

Keep in mind, however, that you could pre-heat the LEAF (as well as the Model 3) while it's plugged in, which is the intelligent way to do it if you have the option. The Civic will burn gas while it's warming up, as there's no way to pre-heat an ICE car without starting it up. Additionally, you can heat up your electric car while it's sitting in your garage, without the typical carbon-monoxide issue associated with ICE vehicles.

Welcome back for another episode of Now You Know! On today's episode, Zac & Jesse go out in the cold to test the heater in the Model 3 vs. a Honda Civic and a Nissan leaf! Now You Know!