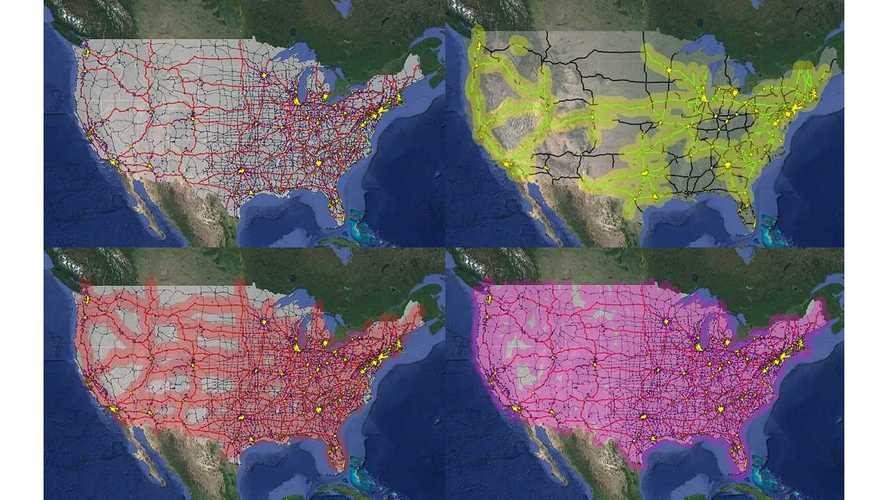 The US DOE’s Office of Energy Efficiency & Renewable Energy recently highlighted the National Renewable Energy Laboratory's (NREL) report on several potential scenarios of how the electric vehicle charging infrastructure will look like in 2030.

The report assumes some 15 million plug-in vehicles to be on the roads in U.S. within the next 13 years. And as such, a few hundred corridors would need to be covered with fast charging stations to enable long-distance travel, while roughly 8,000 are envisioned to serve urban and rural areas nationwide.

Summary of Station and Plug Count Estimates for the Central Scenario (15M PEVs in 2030) (source: NREL)

The analysis makes no assumptions about the likelihood of particular PEV market or technology scenarios. Rather, a range of plausible scenarios explores the relationship between the evolution of the PEV fleet and charging infrastructure.

Communities are expected to have significantly larger charging infrastructure requirements than Interstate corridors under both the coverage and demand assessments. About 4,900 DCFC stations are required across cities with an additional 3,200 DCFC stations required in towns to provide a minimum level of nationwide coverage in the communities where 81% of people live. Such a network would dampen range anxiety concerns by providing drivers with a safety net for emergency charging situations.

Intracommunity charging demand analysis demonstrates how utilization of the DCFC coverage network would be expected to grow in increased PEV adoption scenarios based on a home-dominant charging assumption. Results for a 15-million PEV market estimate a DCFC plug requirement of 25,000 in communities (approximately 3.1 plugs per average DCFC station and 3.4 plugs required to support 1,000 BEVs). Demand for non-residential L2 EVSE (including work and public charging) is estimated as 600,000 plugs necessary to support 15 million PEVs (approximately 40 plugs per 1,000 PEVs).

Sensitivity analysis of the community results for consumer charging demand indicates a strong relationship between the evolution of the PEV and EVSE markets. As this analysis attempts to arrive at charging infrastructure solutions that fill the eVMT gaps between consumer travel patterns and PEV electric ranges, infrastructure requirements are not only proportional to the total number of PEVs in the system, but also inversely proportional to PEV electric range. Manufacturer and consumer preferences with respect to electric range, charging power, and utilization of residential EVSE have direct and dramatic consequences on the level of charging demand calculated in this analysis.

Results suggest that approximately 400 corridor DCFC stations are needed to enable long-distance BEV travel along Interstate highways between cities (where the majority of BEVs are likely to be concentrated). Understanding driving patterns, vehicle characteristics, and charging behavior and then prioritizing corridors and setting station spacing accordingly—as illustrated in the network scenarios—could help optimize the utility and economics of early-market corridor charging stations.

Regardless of geographic scope, the analysis suggests that organizations planning for charging infrastructure to support consumer adoption of PEVs need to be aware of the importance of consumer preferences with respect to electric range and charging behavior. Furthermore, planners should focus on providing consumers with adequate charging coverage (particularly DCFC supporting adoption of BEVs) while monitoring station utilization over time and increasing charging capacity (both in terms of rated power and number of plugs) as the PEV market continues to grow.

The report focuses on non-residential charging equipment to meet consumer coverage expectations and demand. Coverage and charging demand estimates are made for where people live and the highways they travel. They include four specific geographic areas: cities (represented in yellow), towns (in purple), rural areas and the U.S. Interstate Highway System (red lines).

Mega-regions are large networks of cities with shared natural resources and common transportation systems. Most of the nation’s rapid population growth is expected to take place in these large networks. Providing coverage for PEV charging on interstates within each mega-region would result in the fast-charging network shown above and would need 96 to 239 fast-charging stations depending on station spacing.

To provide convenient access to PEV drivers across the U.S. Interstate Highway System (red lines), the analysis finds that 285 to 713 corridor fast-charging stations would be needed, depending on spacing. This map shows the coverage that would result from using fast-charging stations, spaced 70 miles apart on average.

And here we find some very interesting data (however the numbers of charging stations are at least several month old in this case):