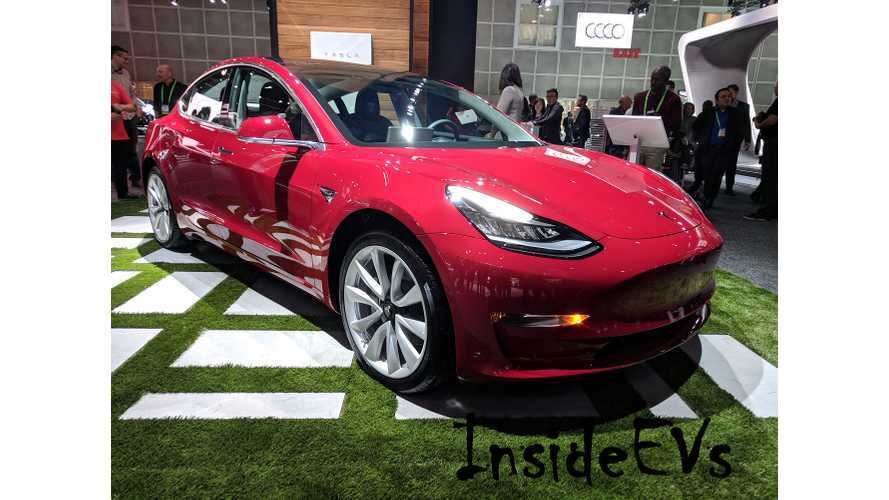 Historically, January is not a good month for EV sales. Way back in 2014, the Nissan LEAF set a January EV sales record with an impressive 1,252 deliveries. In 2017, GM and Toyota were able to break that record with Prius Prime sales at 1,366, and Volt sales hitting a whopping 1,611. Not to mention Bolt sales, which didn't quite break January EV sales records, but were very close behind the old LEAF record, with an impressive 1,162 deliveries. This year, a new January record was set by the Tesla Model 3.

As we move forward into the new year, numbers will continue to climb. Remember, we have new offerings that are just getting underway (Mitsubishi Outlander PHEV, Honda Clarity PHEV, Kia Niro PHEV, and Hyundai IONIQ PHEV). Tesla Model 3 sales are slowly ramping up, the Nissan LEAF will be pushing stronger numbers soon, and the Bolt will be pulling away from a weak sales month, clouded by a detrimental model-year changeover.

Despite its production shortfalls, the Tesla Model 3 was top dog in January, with an estimated 1,875 sales. While the Toyota Prius Prime and Chevrolet Bolt claimed the number two and three spots with 1,496 and 1,177, respectively. We will say that we anticipated a slightly better performance by the Bolt due to healthy inventory, as well as solid growth throughout most of 2017.

Even though we hoped some models would start the year out more aggressively, plug-in sales exceeded January 2017. Let's not forget that last January was about as stellar a month for EVs as one can imagine, especially for a weak sales month - sales the previous January were only at 6,221. Nonetheless, we are still up, and the year ahead should be super-positive for the segment.

Other Statistical Points of Interest from January 2018

All-Electric Vehicle Market Share vs PHEV In January* (*) estimated due to unknown official Tesla sales in the U.S. and BMW i3 REX vs. BEV sales.