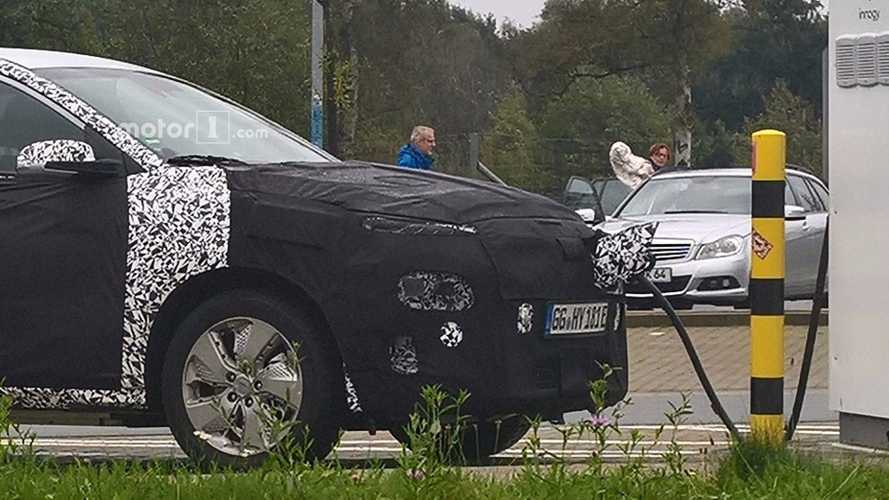 Expected to cover up to 210 miles with the biggest battery pack.

For the time being, you can get the funky Hyundai Kona exclusively with gasoline and diesel engines, but things will change sometime next year when the small crossover will go fully electric. Seen here getting a “refill” at a charging station, the zero-emissions CUV was carrying a heavy amount of camouflage, though we are not expecting any major styling changes.

We can already anticipate some of the design tweaks on the outside as the front grille will be modified to accommodate the charging port. Since there won’t be a combustion engine underneath the hood that would require cooling, it means Hyundai will be able to install a closed-off grille like it has already done with the Ioniq Electric. Some changes to the bumpers might be on the agenda, but nothing to write home about. Needless to say, the engineers will get rid of the exhaust system.

Latest intel suggests Hyundai has plans to sell the Kona Electric (or whatever it will be called) with two different battery packs: 40 kWh and a bigger 64 kWh. The latter should have enough juice for somewhere in the region of 210 miles as per EPA’s test cycle, which would put it in the same ballpark as the base Tesla Model 3 and the Chevy Bolt.

The 64-kWh Kona is scheduled to land in the United States for the 2019 model year and retail for just under $40,000. According to the same report, LG Chem will be in charge of providing most of the powertrain’s components and it is believed the electric motor will be the same one inside the aforementioned Bolt.

Besides giving the Kona the EV treatment, Hyundai is also analyzing the prospects of doing a high-performance N version. However, it’s not a big priority right at the moment, so don’t expect to see it in the near future.