Musk Tweet Scores $128,000 In Hat Sales For The Boring Company 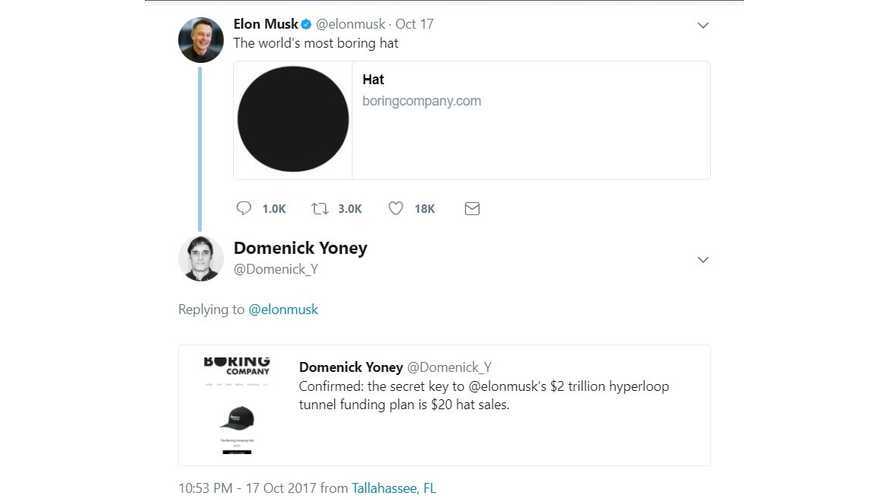 Elon Musk got a lot of criticism a while back when he proposed digging a vast network of tunnels, ostensibly for a hyperloop system, connecting New York, D.C., Baltimore, and Philadelphia. This despite the fact that he already set up The Boring Company for this effort, which already has experience digging beneath L.A. It seems some have concerns that the multi-billionaire entrepreneur might have trouble raising the funds for the venture. As if.

After careful calculations by the staff here at InsideEVs, and with the help of some independent consultants (not really), we've determined Mr. Iron Man will need about $2 trillion to fulfill his mole goals. And now, we've learned how he will raise those funds: hats.

Taking a page from Team Fortress 2, a video game Musk is a self-admitted fan of (mea culpa: medic4lyfe), he's offering hats for sale. Not just any hats, of course, but promotional head pieces bearing The Boring Company logo, as designed by J.J. Abrams. (No, seriously. it was designed by J.J. Abrams, a guy well known for making TV shows, and a couple movies.)

Now, to some, this might seem a little far fetched. We hear you. Like, who wants a stupid hat to validate their love of Boring?  There are other ways to go through life. Going hatless, for instance. Also, drunk. But we digress.

Put aside your doubts, people. The plan is working. In less than two days time, Musk has, according to him, already sold a remarkable 6,400 one-size-fits-all hats emblazoned with that aforementioned logo at $20 a pop. That's a gross haul of $128,000!!! Now, we understand shipping and handling will come out of this figure, and the 5,000th purchaser was awarded a second hat free, but it's obvious that this secret financing plan now come to light is working. After permits are acquired from the hundreds of principalities affected by the tunneling work, digging will indubitably commence.

Before you know it, you will find yourself at a hyperloop ticket kiosk, your coiff covered by a stylish black cap bearing The Boring Company logo, buying a ticket from Philadelphia to Baltimore for a special Halloween event involving readings from Edgar Allan Poe. And to that future you, we say, "Enjoy the ride," and "Nice hat!"

Get a Boring Hat of your own here.

(As a reminder, if you need more Boring talk in your life, we have a hand-crafted thread on the InsideEVs Forum just for you!)