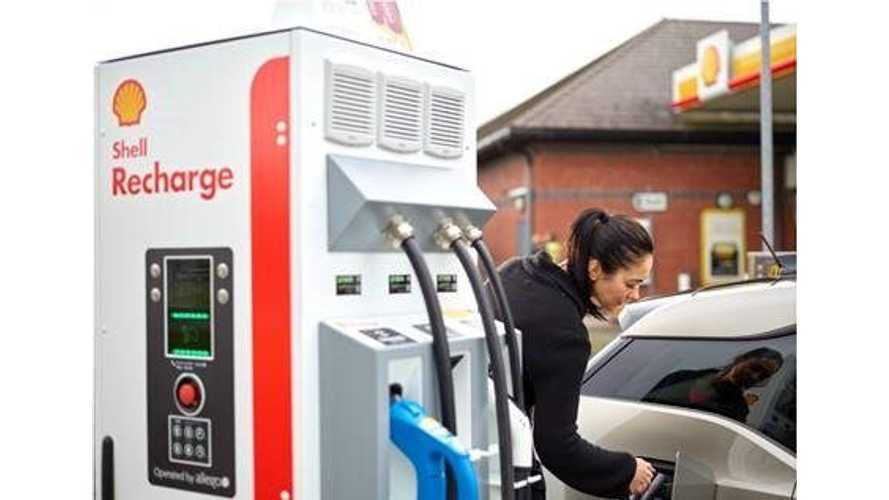 A total of ten to be installed by the end of this year (a further seven locations within Greater London and Reading).

The locations have been chosen because of their proximity to main driving routes.

Prices of Shell Recharge stand at:

Soon Shell Recharge is also to be launched in the Netherlands.

Video below:  James Cooke (via the comments) pointed us to his experience with the live launch of one of the chargers (from 1:52 mark, also look for Fully Charged Robert Llewellyn to pop up)

More details on the program from Shell:

The UK is the first country in which Shell Recharge will be available, following the opening of Shell’s first hydrogen refuelling station at Shell Cobham earlier this year. The service arrives hot on the heels of Shell’s announcement last week that it has signed an agreement to buy NewMotion, one of Europe’s largest EV charging providers. These initiatives see Shell developing a full raft of charge solutions to support the future of EVs, and demonstrate Shell’s commitment to delivering a range of fuels to UK drivers, as new technologies evolve to co-exist with traditional transport fuels.

Shell Recharge provides rapid chargers, which charge most cars in approximately 30 minutes. While they charge their vehicle, customers can pick up a drink or snack at Shell’s Select Shop, offering Deli2Go and Costa Coffee, and use Shell’s free wifi. Jane added, “Shell Recharge will soon be available at ten sites in the UK and will offer EV drivers in these areas a reliable, convenient and subscription-free charging service where they can charge their vehicle and take a break from their journey.”

As part of this initiative, Shell has been collaborating with Transport for London (TfL) to introduce the charging points, in line with the London Mayor’s drive for a Zero Emission capital by 2050. Shirley Rodrigues, the Deputy Mayor of Environment and Energy said: “It is great news that Shell is introducing electric vehicle charging services on its forecourts as thousands more Londoners switch to cleaner cars. With sales of diesel cars declining, it's vital to have charging points for electric vehicles in service stations, car parks and on our streets. As the Mayor moves towards making London's transport system zero-emission by 2050, TfL are working with boroughs to increase charging infrastructure across our city. The expansion we require will continue to demand strong collaboration with industry, private landowners and greater investment from Government.”

Shell Recharge has been introduced in partnership with Allego who will manage the operation of the rapid chargers. Anja van Niersen, CEO of Allego said: “electric mobility is developing very fast and a new generation of e-cars is now available for consumers. We highly value Shell’s vision and leadership in integrating rapid charging at their service stations. We know that electric vehicle drivers want the right charging solution at the right place, to be always available and combined with excellent services. Shell Recharge shows how these wishes can be met.”