Amazon Patents Drone That Will Recharge Your Electric Car 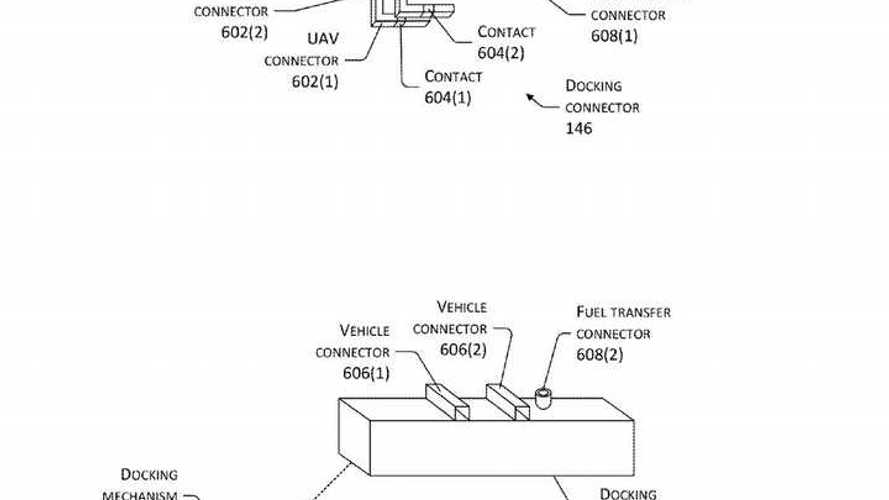 Drawings of Amazon's drone, which could potentially charge an electric car

There is really no reason why it couldn't show up and add a few miles of range to get you out of a bad situation. However, charging to any meaningful capacity would be an epic feat.

Amazon has come up with a patent for a drone that would be summoned by an electric car driver who needs a charge and can't get to a charger. It would also add convenience because you could charge without having to stop the car and wait an hour or so. The idea is sort of like a plane that refuels another plan while flying.

The patent was filed way back in 2014 and just approved this month. It was discovered by Greentech Media and then subsequently exposed by The Drive.

Once summoned, the drone would approach the vehicle, wirelessly communicate, and match speed. Then some type of apparatus would protrude from the top of the vehicle so that the drone could dock and provide the necessary "juice". There's a whole lot more to the idea, which you can read by clicking the link at the bottom of this page, but that's the basic idea.

Now, here's the issues. A typical drone wouldn't have the ability to "carry" very much energy. Batteries surely aren't lightweight. In order to provide any reasonable amount of range, it would have to lift huge batteries, meaning it would be a significantly large drone with mammoth electric motors. These type of vehicles aren't very efficient in the first place, so the added weight would surely diminish airtime. The further it has to fly, the more power would be depleted.

Possibly (and hopefully), there will come a day when something like this could be viable. However, with current technology, it might be good for a few emergency miles to get you to the next charging station.