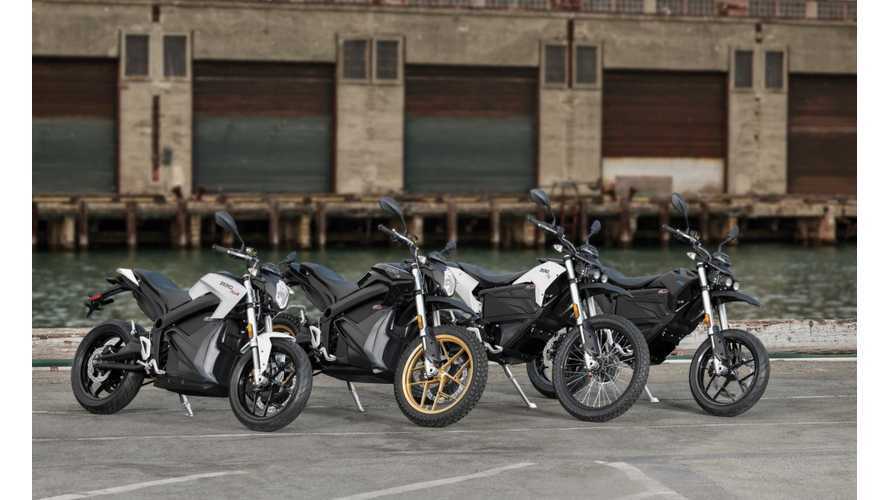 Zero Motorcycles has just released its new lineup for 2018, and as always, they have made significant improvements. The same models we know are all back, but better. The batteries are (mostly) bigger, so range has increased; recharging is now (optionally) six times faster than using the standard plug; performance has been improved. They even have a range of new colors to set them apart from the bikes that have gone before.

The Zero Motorcycle app, besides recognizing the 2018 bikes, will now alert you if you need a firmware update (on the 2017 and 2018 models). It still offers features like temperature readouts and custom motor map configuration, among other things. Bugs, as they say, have been fixed.

The California bike maker has two platforms. The aluminum bones beneath the S, a naked streetfighter, and the SR, its souped up sister, along with the DS dual-sport and its hopped up DSR variant are the same, while the FX enduro and FXS supermoto, with their smaller, but swappable batteries, share a different chassis. There are a number of differences in battery sizes for the different models as well, so let's take them all one at a time.

The SR is Zero's star, so let's start here. Power output figures are the same as last year, with 70 barely-tamed horses and 116 pound-feet of torque. The battery, though, holds more energy than before, reaching an impressive 14.4 kWh (12.6 kWh nominal). Unlike the tamer S, that is the only battery option available for the big box below the seat. However, as with the other bikes that share this platform, you can add a Powertank in the "gas tank" storage space area. For 2018 this $2,895 option adds 3.6 kWh, making the overall capacity 18 kWh (15.8 kWh nominal). According to Zero, maximum battery will give you 223 miles of range in the city, 136 miles at a steady 55 miles per hour, or 112 miles at a steady 70 mph.

Instead of brute range, some might consider adding the Charge tank option instead (bikes with Power tank can not also have Charge tank). Shelling out $2,295 for this option lets you charge with the standard J1772 connector and pump current at a rate of 6 kW, dropping long distance travel times significantly, and filling from empty to 95 percent in two hours. Distances between charges will be 179 miles in the city, 109 miles at a steady 55 mph, and 90 miles at a steady 70 mph.

The S is a slightly toned-down streetfighter and has two basic battery variants: the larger-for-2018 7.2 kWh (base price $10,995) and the 13 kWh (base price $13,995). By changing gearing and allowing for increased RPM from the air-cooled motor, torque is improved by 11 percent for the baby battery version, while the bigger 13 kWh box allows for 30 percent more power — figures given are 30 hp with 78 lb-ft and 60 hp with 81 lb-ft respectively.

The Zero DS and DSR are dual-sport echos of the S and SR. They boast the same numbers, power and battery-wise — even the $10,995/$13,995 price tag is unchanged — but offer some off-road capability with Pirelli MT-60 rubber featuring an enduro tread, and a little more travel from the Showa suspension. A 1.4-inch increase in seat height over the S/SR brings it up to 33.2 inches. Being a little taller and a few pounds heavier than the Zero S, its range suffers slightly, knocking off approximately 5 to 10 percent, depending on speed.

The Zero FXS is the brand's supermoto offering and, as you can see from the video above, is light, quick, and flickable. It's a whole 62 pounds lighter than the Zero S with the same amount of battery, and a whopping 163 lbs lighter than the SR with its big pack. The trade off here is battery and range, of course. The FXS comes with either a 3.6 kWh or a 7.2 kWh pack, which is about ten percent more than last year's. There is no optional Power tank (or Charge tank, for that matter), however.

The smaller battery version is Zero's least expensive model at $8,495, though its also a little down on power, offering 27 hp and 78 lb-ft of torque. Less energy from the battery also means less range. On the FXS 3.6, that means 50 miles in the city, 30 miles at 55 mph, and just 20 at a steady 70 mph. What you give up in range you can get back in potential flexibility. Buy an extra battery, and you can charge one while you ride with the other, swapping them out quickly. Or, you could use both at the same time, effectively making it a 7.2 kWh machine.

The FX rounds out the Zero lineup. With identical stats (battery, power, and price) to the FXS, this bikes trades in the Pirelli Diablo Rosso II tires that adorn the FXS for a set of Pirelli Scorpion MT 90-wrapped  hoops. The Showa suspension on the FX boasts the most travel of any of its siblings, with 8.6 inches from the front and 8.94 from the rear. The extra absorption will definitely come in handy off-road, though if you want to really take advantage of this feature, you should probably shell out extra for the chain kit. Some riders have reported belts breaking upon landing under hard throttle.

Overall, Zero has optimized its two platforms for 2018, offering the latest in battery improvements and wringing out every last bit of performance available, while keeping prices mostly in check (the SR and DSR models are $500 more than last year, while the other models keep the same prices from 2017). They look more fun than ever to ride and we can only hope to have the opportunity to do just that in the coming months.