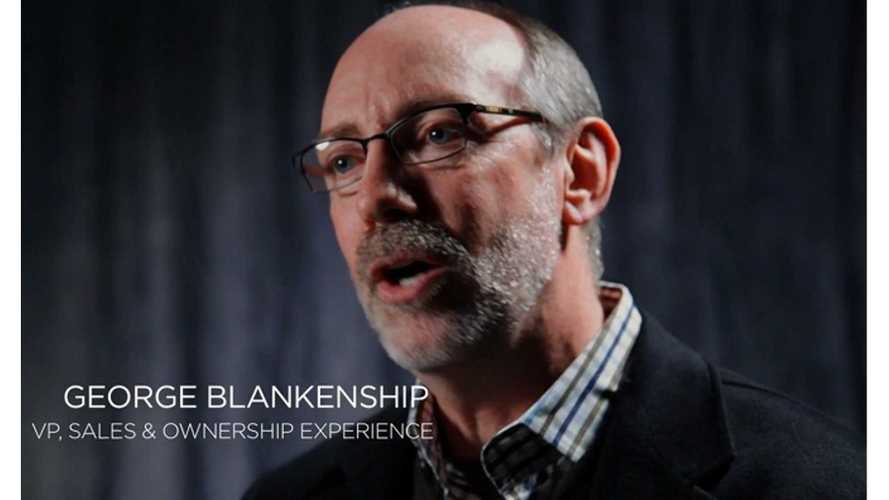 George Blankenship started as a store manager at retailer Gap, where he advanced to Vice President of Corporate Strategy as the company grew from 500 stores to over 3,000. As VP of Real Estate at Apple, he was part of the team that launched the first 165 Apple Retail stores. Blankenship was with Tesla from 2010 to 2013, starting as VP of Store Design & Development and ending up as VP of Worldwide Retail.

He recently delivered an in-depth talk for the EMAAR Speaker Series, in which he has a lot of interesting things to say about Tesla’s hiring practices, customer service approach and retail tactics. Most of the massive media coverage of Tesla has focused on electrification, autonomy, and 0-60 mph pyrotechnics. The company’s approach to selling its cars has received much less attention in the press. Blankenship was one of the main architects of that strategy, and this talk sheds light on an aspect of Tesla’s history that we haven’t heard much about.

UPDATE BELOW: Video of Blankenship's talk at the EMAAR Speaker Series has unfortunately been taken offline

At the heart of Blankenship’s philosophy is an “obsessive” focus on the customer’s needs and wants (including those that they don’t know about yet), which is neatly summed up by something Steve Jobs once said:

“You have to start with the customer experience and work backwards to the technology.”

You might think that this is pretty self-evident, at least for any organization that values happy, loyal customers. So why do so many companies try to do things the other way around? Perhaps it’s because they don’t have people who understand both sides of the equation. Both Steve Jobs and Elon Musk had/have an intuitive understanding of how customers interact with products, combined with formidable technical skills.

At the time Tesla was formed, it was not the only company trying to build a viable electric car. However, the others, including AC Propulsion, an early partner of Tesla, were asking, “What can we do with the technology we have?” while Elon Musk and JB Straubel were asking, “What do customers really want from a vehicle?”

To put this customer-centric philosophy into effect, you often have to “do the impossible.” Of course, Mr. Blankenship doesn’t really mean doing what is physically impossible but rather doing what people assume is impossible. In 2003, automakers assumed that no one would buy an electric car. They were trapped in the way of thinking that Blankenship calls “interesting...but.” Electric cars were interesting, but people wouldn’t buy them because they were only for “green” people, they were expensive, no one they knew had one...etc. Find a way to eliminate those “buts,” and you may be able to turn an “interesting” idea into a profitable product.

Blankenship tells some engaging stories about the early days of Tesla’s retail efforts, which began with a store in Sunnyvale, California. Instead of opening a sprawling dealership out on the airport road, where people go shopping for cars, Tesla opened a fun and stylish little shop in a mall, where most of the people who stopped in weren’t thinking about buying a car at all. Rather than giving visitors the typical car-dealer hard sell, employees encouraged them to put their kids behind the wheel, and post pictures online. The word spread and the store was soon packed. Blankenship didn’t expect many to order a $140,000 Roadster - and few did. But, to his astonishment, hundreds were willing to put down a $5,000 deposit on a Model S, even though it wouldn’t be available for another two years (longer, as it turned out).

UPDATE:  Video have now unfortunately been taken offline.  We will repost once a replacement can be found

Above: Blankenship presents at the EMAAR Speaker Series; he covers Tesla from about 1:29:52 to 2:03:16 (Youtube: Kartik Raj Rewar)

Blankenship goes on to tell the story of Tesla’s long war with traditional auto dealers and their allies in state legislatures around the country. As Tesla began opening stores in malls around the country, it ran up against state laws that require cars to be sold through independent dealers. Rather than concentrate on selling in EV-friendly California, Blankenship and his team immediately started trying to find ways to work around restrictive state laws in states like Texas and New Jersey, by making sales over the phone and delivering vehicles from other states. Today, Texas is one of six states that still ban direct sales, but it has become “one of the best states in the nation” for Tesla sales.

As a number of other past and present Tesla execs have recounted, before Blankenship joined the company, Elon Musk sat down with him to explain his vision of changing the world by making our transportation and energy systems more sustainable, more robust and better in every way. This vision resonated with him, and the rest is history. Tesla’s corporate philosophy fit right in with the principles Blankenship has applied at Gap, Apple, and now as a consultant for Amazon: customer focus; innovation; simplification; and quality products.

“It’s not impossible - it just hasn’t been done yet.”