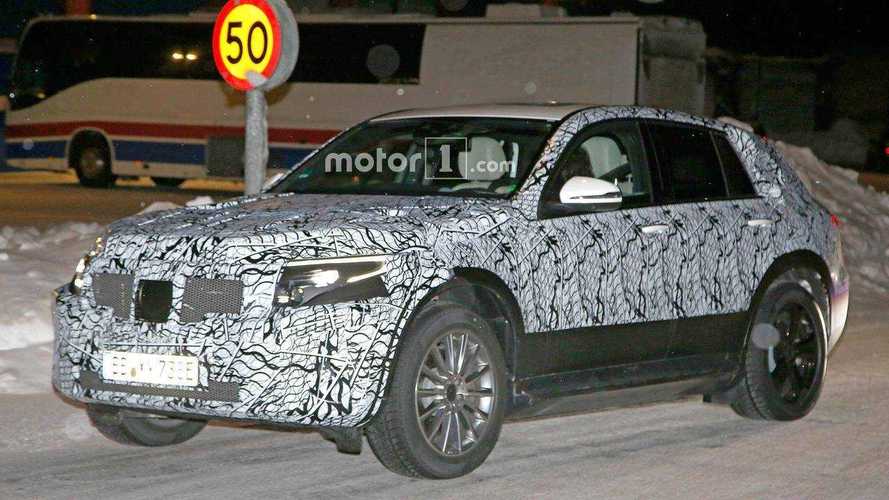 The production model doesn't arrive until 2019.

Like the upcoming Audi E-Tron Quattro, Mercedes-Benz has an electric, premium crossover under development as a challenger against Tesla Model X. These spy shots catch the production version during cold-weather evaluations ahead of sales beginning 2019.

The production model appears to take significant cues from the Mercedes Generation EQ concept (gallery above). Ignoring the cladding covering the body on this test mule, they appear to share the same smooth shape. A broad grille connects to headlights that come to a point at their corners. A large piece of concealment over the rear hatch on this prototype indicates that the two vehicles would have similar subtly raked hatchbacks, too.

In concept form, the Generation EQ packed an electric motor at each axle with a total combined output of 402 horsepower (300 kilowatts) and 516 pound-feet of torque (700 Newton-meters). The combo got the SUV to 62 miles per hour (100 kilometers per hour) in less than five seconds. A 70-kilowatt-hour battery provided at least 311 miles (500 kilometers) of range. The company will likely try to get similar specs out of the production version.

Mercedes will invest $1 billion into its factory in Vance, Alabama, specifically for production of EQ electric models, including this one. It'll allow for assembly of the EQ C crossover to begin in 2019. Norwegians can reserve the vehicle today for the equivalent of around $2,500.

EQ will be Mercedes moniker for its future dedicated EVs. After this crossover, the company will launch a smaller model taking cues from the EQ A concept. Based on the show cars so far, Mercedes will give all of these EVs very smooth styling, which will give them a futuristic aesthetic to befit the cutting-edge powertrains.