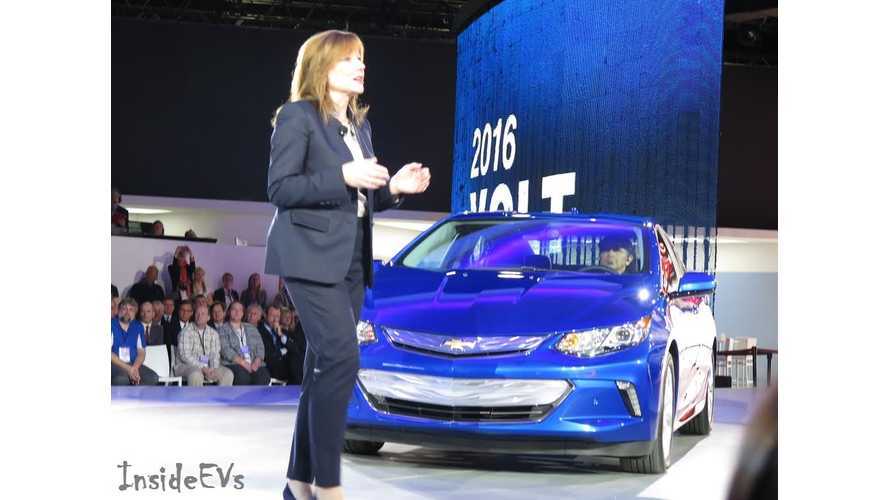 GM CEO Mary Barra believes we must convince people to adopt electric cars, not mandate them.

GM CEO Mary Barra had to clarify some recent remarks about electric cars to assure that her words were not spun into something negative.

Barra has made it clear on numerous occasions that she supports electric cars and is excited about GM's electric future. However, she is concerned about demand and believes that it's important to excite people about the segment, rather than outright mandating it. Sometimes people respond negatively to mandates, and no one really wants to be forced. Barra hopes to be able to work to assure that the transition happens the right way.

The CEO was just honored in Washington for being named Fortune Magazine's Most Powerful Woman. She spoke at a conference following the award. Barra's reference to mandates came when referring to recent talk about China banning gas and diesel vehicles. She shared:

excited about the Chevrolet Bolt, however, not unlike other legacy automaker CEOs, she's skeptical about demand" draggable="false">

Mary Barra is an electric car supporter and very excited about the Chevrolet Bolt, however, not unlike other legacy automaker CEOs, she's skeptical about demand

“Clearly we believe that the Chinese market will have the highest electric vehicles most quickly because of the regulatory environment. I think the point I was trying to make, and it kind of got spun into something a little different, is at the end of the day you still have to make customers happy and you have to fill their needs.

We’ve encouraged the Chinese government to work with us and work with the industry to make sure we’re creating the excitement and demand for electric vehicles as opposed to it just being mandated."

Barra didn't say that China's move -- and that of other countries planning similar strategies -- has to do with politics. However, she did admit that countries are pushing to support climate regulations, along with creating new jobs and building stronger economies. This is all despite the Trump administration's decision to back out of the Paris Climate Accord. Barra continued:

“It’s looking at where the future is going and wanting to have a stronghold. Every country wants to look and make sure that they have new technology that’s going to create jobs and create a very strong economy.

Barra admitted that she will likely always have at least one car that is not autonomous. Though she's excited about self-driving cars, she knows that people also crave the experience of driving. On the other side of the coin, Barra thinks that the only way people will truly commit to and believe in autonomous vehicles is by experiencing them and realizing how much time they will have to multi-task and not have to worry about the work involved in driving. She explained:

"I think they are going to care about the experience. You see it in today’s ride sharing. Ride-hailing passengers have the ability to choose whether they want to carpool or ride unaccompanied in an individual vehicle.

I think it’s going to be the experience, and there’s so much more when you think about it when you’re riding and you can be completely detached from how you’re getting from point A to point B. Giving back that time is going to be key. With connectivity, we’re imagining quite a few things that people will be doing with that time back.”