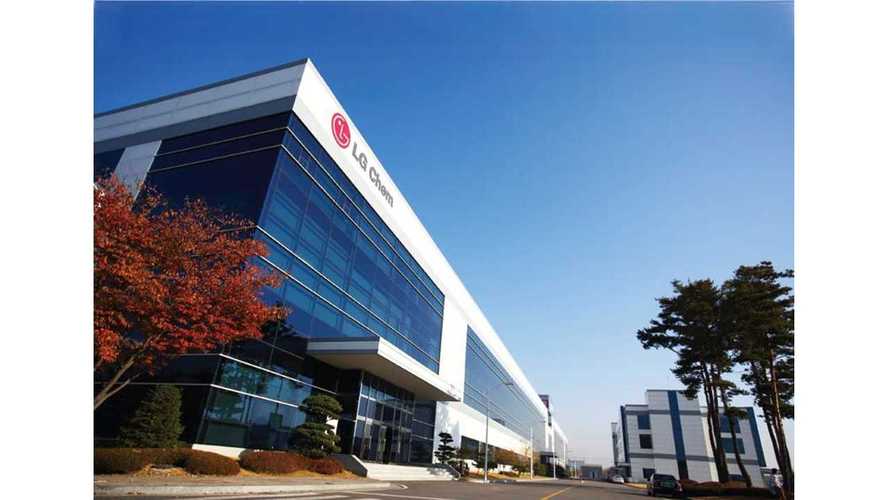 The factory will be scaled to produce enough cells for 100,000 battery packs (of undisclosed sizes), which means no less than several GWh annually. The factory will employ 2,500 people.

Currently, there is no shortage of auto manufacturers in Europe willing to purchase batteries from LG's new factory - from niche brands like Jaguar, which will introduce the I-PACE, through Volvo, and the largest players in the industry - the Volkswagen Group, Renault-Nissan and Daimler, to name just few.

"LG Chem plans to spend 5.9 billion zlotys ($1.63 billion) on the factory near the southwestern city of Wroclaw, according to Polish state industry agency ARP.

Wroclaw is 190 kilometers (118 miles) from the border with Germany, home of VW Group which plans to invest more than 20 billion euros ($24 billion) in zero-emission vehicles by 2030 and make 3 million electric vehicles (EVs) a year by 2025."

"Asked about the source of lithium and other raw materials, a representative of LG Chem’s local arm said they would first be imported from the parent company in Korea and then hopefully from Polish suppliers."

The anticipated demand for batteries for electric vehicles (in general, and also in Europe particularly), suggest that the new factory in Poland will not be the largest one for too long; that is if Sweden's NorthVolt project gets fully funded, and production underway as planned (up to 32 GWH annually by 2023) according to Reuters.

“The company has chosen Poland as the most competitive location for production to satisfy the needs of European and global car producers,” said Chang-Beom Kang, vice president at LG Chem to Reuters.

More about the project from ARP:

Agencja Rozwoju Przemysłu S.A. (The Industrial Development Agency JSC, IDA), on behalf of Minister of Development, has issued a permit to LG Chem Wrocław Energy Sp. z o.o., belonging to Korean concern LG Chem, to run business operations in the sub-zone Wrocław-Kobierzyce of Tarnobrzeg Special Economic Zone EURO-PARK WISŁOSAN. Thanks to the LG Chem’s investment, the largest factory of batteries for electric vehicles in Europe will be built in Poland, which will deliver its products to the top European car makers.

LG Chem is constructing a battery plant with a capacity of 100,000 units of high-performance pure electric vehicle. The construction will be completed by the end of 2018. In addition, LG Chem recently invested KRW 436 billion in LG Chem Wroclaw Energy, a subsidiary operating the battery plant in Poland, and posted a debt guarantee of KRW 872 billion. LG Chem Wroclaw Energy will continue to secure necessary production capacity in accordance with market conditions.

It is also an important step in the execution of government’s Plan for Development of Electromobility – Global innovative companies are choosing Poland as a place for their investments more and more often. It is a proof that changes introduced by the government are going in the right direction. Another such a large investment of LG is a very important event for us. The project brings new quality for FDI in Poland and is a milestone in the development of electromobility. Thanks to LG’s investment, Poland will become the main hub of li-on batteries production for automotive industry in Europe – said Mateusz Morawiecki, Deputy Prime Minister, Minister of Development and Finance.

– Electromobility market in Europe is expected to grow fast as many governments in Europe are trying to spread eco-friendly mobility. LG Chem, Ltd. has selected Poland as the most competitive production site to deal with automotive OEM customers in Europe as well as globally. The factory to be constructed, which is applied by “Smart Factory” system, will produce state-of-the-art Li-ion batteries for Electromobility and Energe Storage System(ESS). We have a plan to nurture Wrocław as a global hub of Electromobility industry through further investment in the area, keeping pace with growth of Electromobility market. We really appreciate sincere support from Polish authorities and also ask for close cooperation in the future – said Chang-Beom Kang, Vice President of LG Chem, Ltd.

Directly, new production facilities of LG Chem will offer almost 2.5 k new jobs, and in partner companies, the number of new employees may be even twice that large. High technical level of production and planned establishment of an R&D center will require employing about 400 engineers specializing in such fields as automation, electronics, chemistry, and IT. LG is planning to start cooperation with technical universities in Poland, particularly with Wrocław University of Science and Technology.

– We are happy that investors see the potential of the special economic zones managed by IDA. The zones are so attractive due to highly qualified staff and cooperation possibilities that bring large innovative projects. Another investment of LG Chem in the subzone Wrocław-Kobierzyce is good news for Polish entrepreneurs, who can join the supply chain for the new and prospective production branch. Talks on concerning suppliers and development works are bringing the anticipated results. Investments of companies cooperating with LG Chem have been already started in the subzone Wrocław-Kobierzyce – underlined Marcin Chludziński, President of the Board at IDA.

For instance, Starion Poland, producer of casings and plastic elements, started the construction of a factory producing components for li-on batteries in September; the value of the investment will amount to PLN 55 million.

LG Chem’s factory is another large investment, following Daimler, Toyota, Fiat and Volkswagen, which was carried out thanks to active support of the Minister of Development and institutions he supervises. According to Eurostat’s data, 223 k new jobs have been created in Poland since the beginning of the year, comparing to 354 k in whole EU. This means that every two out of three new jobs in the EU were created in Poland.

Since the very beginning of Tarnobrzeg Special Economic Zone EURO-PARK WISŁOSAN, a total of almost 350 permits to run business operations have been issued there. Total investment outlays in the zone amounted to PLN 8.5 million, which led to creation of over 30 k new jobs. Currently, the zone encompasses areas located in 6 provinces and 22 subzones, which makes up an area of 1 868 hectares.