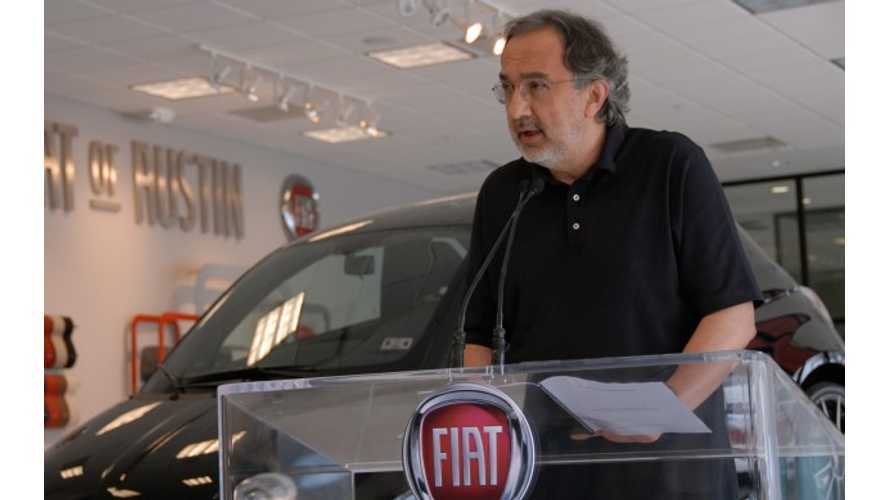 Fiat Chrysler CEO Sergio Marchionne has been busy making the rounds to trumpet his doubts about electric cars. Last Monday, The Street reported that Marchionne said,

"As much as I like Elon Musk, and he's a good friend and actually he's done a phenomenal job of marketing Tesla, I remain unconvinced of... economic viability of the model that he's pitching."

Then, yesterday on CNBC, Marchionne was a little less tactful stating, "I think the analysis that we are going to save the planet with electric cars is nonsense." At least, he's not sugar coating his views. It's possible top execs at legacy automakers are using vehicle electrification pronouncements as feel-good window dressing for their brands. Not Marchionne.

The buzz began last week when Bloomberg reported on Marchionne whose Fiat Chrysler brand is: "losing as much as $20,000 a car on its Fiat 500 subcompact’s electric version." Referring to government mandates to meet CO2 requirements, Marchionne remarked: "Because of the time-frame chosen in Europe, we have to electrify... But if you tell me that this is the answer, I say no."

CleanTechnica's Steve Hanley laments, "The world is changing and Marchionne is standing in the middle of the road trying his hardest to hold back progress." Electrek's Jameson Dow opines, "Treating electrification like a chore is not going to benefit Fiat Chrysler." In addition, Dow feels that, "Marchionne has taken the bet that fuel cells will somehow... miraculously become more efficient than batteries, but he will lose that bet." After all, there's a reason that Elon Musk called them "fool cells."

In the Bloomberg interview, Marchionne appears to be envious (but perplexed) by Tesla's Elon Musk. On the one hand, he says Tesla has "a better mousetrap." On the other hand, he was quick to say he’s “not defending Elon” and doesn’t “think that economic model works." To be fair, he's not alone. Marchionne joins a chorus of auto industry execs who've doubted Tesla and Elon Musk.

Nevertheless, Marchionne admits, "We are a very slow industry; for us to make a decision takes forever.” In contrast, he says, "Elon moves at the speed of a rocket.” He nervously says, "The biggest fear that I see is that we will be left behind."