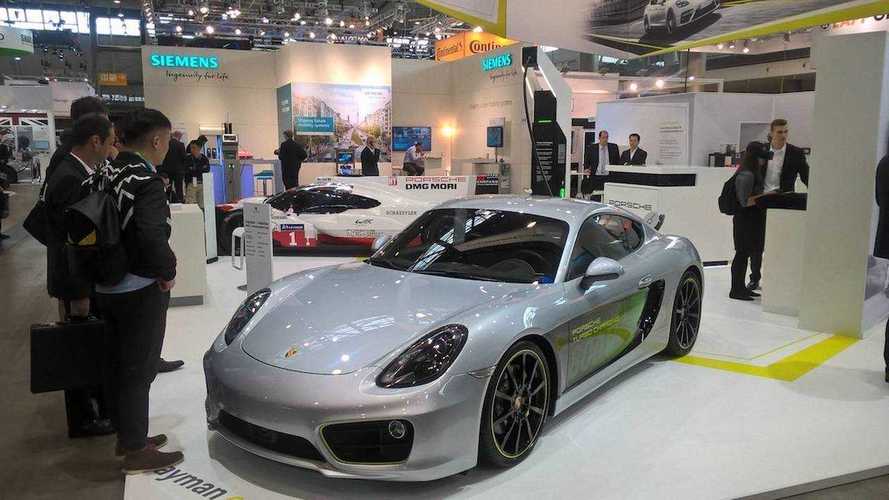 In case you were having doubts, the future is electric.

Almost a week after catching a first glimpse of the Mission E in the wild testing, today we bring news about another fully electric car from Porsche. Only a concept at this point, but the Cayman-based e-volution serves as a research vehicle and is currently on display in Germany at the Electric Vehicle Symposium in Stuttgart. While it may look like a fairly standard pre-facelift Cayman (981) with some green accents inherited from the 918 Spyder, it’s actually significantly different underneath the familiar skin.

With this being a fully electric vehicle, it goes without saying the “Turbo Charging” lettering on the doors does not refer to the powertrain’s forced induction. It’s there to denote the concept’s charging voltage of 800 volts and serves as preview for the Mission E’s Porsche Turbo Charging system capable of recharging the battery pack to an 80 percent level in just 15 minutes.

Porsche is making it crystal clear the Cayman e-volution is not destined for production as it’s only a stepping stone for EV development. The future is exciting if we take into account the all-electric coupe is seriously quick by reaching 62 mph (100 kph) in only 3.3 seconds or 1.3s less than today’s 718 Cayman in the hot S specification.

With a full charge, the unspecified battery pack can last for up to 124 miles (200 kilometers), which isn’t very impressive, but bear in mind this is merely a research vehicle. As a reminder, the aforementioned Mission E due in 2019 will do ~311 miles (500 km) between charges (NEDC - 250 miles/400 km in likely real-world/EPA-estimated range).

For the first time, the sports car marque is showcasing at the Electric Vehicle Symposium an accumulator-based fast-charging system developed by Porsche Engineering in collaboration with ADS-TEC. Tailored to areas where power limitations are affecting the distribution system, this version of the Porsche Turbo Charging system can achieve a maximum charging capacity of 320 kW for a single electric car or twice 160 kW.

Porsche has made the promise it will be put to good use as a supplement to a high-power fast-charging network with medium voltage connection and one of these networks will be operational by 2020 on important traffic routes in Europe. To make it happen, Porsche has joined forces not only with Audi part of the same VW Group, but also with BMW, Daimler, and Ford.

E-Performance at the Electric Vehicle Symposium

Industry gathering on the topic of e-mobility: As part of the Electric Vehicle Symposium (EVS) at the Messe Stuttgart exhibition site, Porsche AG is showcasing the future of the sports car.

With the Cayman e-volution the company presents a research vehicle with a charging voltage of 800 volts that accelerates from zero to 100 km/h in 3.3 seconds and offers a range of 200 kilometres. The vehicle will not go into series production, but does give an early indication of just how sporty Porsche believes e-mobility can be. It is also a hint of what is to come in 2019, when Porsche will bring its first purely electric sports car, the Mission E, into production. The Mission E will be capable of covering a range of over 500 kilometres, and will be able to charge its batteries to 80 per cent within just 15 minutes.

With Porsche Turbo Charging, the sports car manufacturer is also showcasing its first ever accumulator-based fast charging system, which is capable of achieving a charging capacity of up to 320 kW per vehicle or twice 160 kW. The system is a collaborative development between Porsche Engineering and ADS-TEC, and is particularly suitable for use in areas where the distribution system is subject to power limitations. The system is to be used as a supplement to high-power fast charging network with medium voltage connection. One of these networks will be built on major European traffic routes by 2020 in a joint venture between Porsche, Audi, BMW, Daimler and Ford.

The Electric Vehicle Symposium from October 9 to 11 2017 is the world’s largest industry gathering on the topic of e-mobility. Porsche is sponsoring the event and is also participating as an exhibitor. In addition, the sports car manufacturer is providing numerous experts, who will be able to demonstrate their comprehensive expertise around all things e-mobility. Porsche was the first manufacturer to bring three plug-in hybrid vehicles to market in the premium segment. For several years now, the company has also been gaining valuable experience in the use of hybrid engines at the highest possible level of performance in the LMP1 class of the FIA World Endurance Championship. This experience has enabled Porsche to exhibit a mock-up of an LMP1 racing car at the Porsche EVS stand – the same car that has seen Porsche win the 24 Hours of Le Mans and the FIA World Endurance Championship several times over.