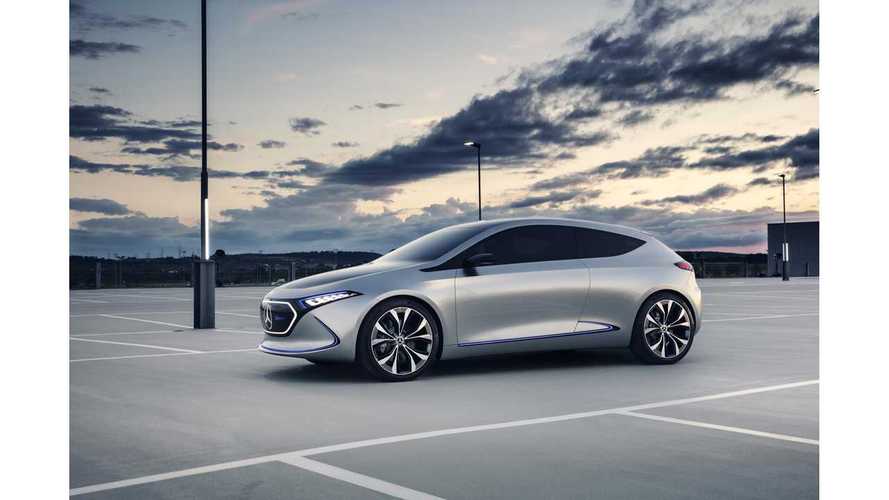 Mercedes-Benz's parent company, Daimler, plans to introduce to the market more than ten different all-electric vehicles by 2022.  And over the long-term, the entire Mercedes portfolio is to be electrified.

The bulk of the efforts of electrification are gathered under company's new EQ brand, a development of which Daimler will invest more than €10 billion into.

The first all-electric EQ is to be the Mercedes EQC - SUV, scheduled for market launch in 2019.

The EQC will be then followed by few more related offerings, including the EQA compact car, presented in concept version at the Frankfurt Motor Show in September.

The EQA is modern electric car with two electric motors - one for each axle - enabling both all-wheel drive and also a high-capacity, flat battery pack under the floor between axles.

The 60+ kWh setup (Mercedes has yet to reveal exact specs other than to say more than 60 kWh) should allow for more than 200 miles /321 km of real world range (or somewhere north of 250 miles / 400 km in optimistic NEDC) terms.

"At the same time, the Concept EQA is another example of the logical evolution of the Sensual Purity design idiom: sharp edges and lines have been significantly reduced. One example of the new electric aesthetic is the light technology which features laser fibres. Here a laser-activated medium is embedded in the centre of a fibre-optic cable. The eye-catching spiral-shaped light signet underlines the electric concept, its design evoking the copper windings of an electric motor and the animation visualising electrical impulses.

Two electric motors, with a system output that can be increased to over 200 kW thanks to scalable battery components, and permanent all-wheel drive deliver impressive dynamic performance. The two drive programs "Sport" and "Sport Plus" offer a different front to rear torque distribution, allowing a choice of individual drive characteristics.

The black panel at the front end acts as a virtual radiator grille and changes its look according to the drive program. In the "Sport" drive program the grille depicts a flaming wing in horizontal format, while in "Sport Plus" mode vertical struts in the style of a Panamericana radiator grille are displayed."