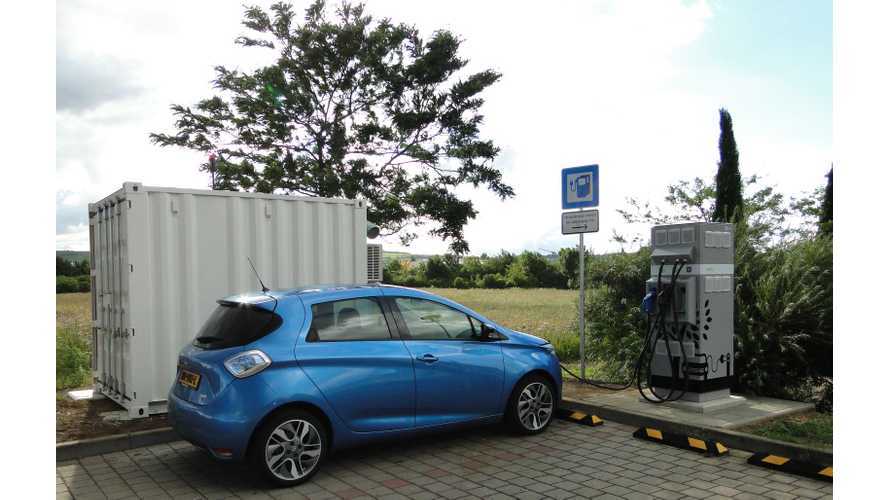 Renault has announced a new subsidiary - Renault Energy Services, that will specialize in the fields of energy storage and electric mobility.

The French group intends to use the new company to better focus its activities on energy storage (using second-life batteries from EVs), vehicle to grid interaction and the smart grid.

It is interesting to note that Renault Energy Services is set to operate much like a start-up, and its objective is to invest in smart grid-related projects by forging privileged ties with the energy industry’s various stakeholders.

This summer Renault (with Connected Energy) began installation of energy storage systems with second-life batteries at charging stations with limited power supply from the grid.

"Thanks to its new subsidiary, Groupe Renault intends to make a real contribution to the expansion of smart charging networks which, by facilitating the communication of data, are capable of making real-time adjustments to the supply of electricity for more-efficient management of resources. Renault electric vehicles connected to smart grids will benefit from more economical, lower-carbon electricity.

In addition to permitting the development of smart charging, smart grids favour both interaction between electric vehicles and networks (vehicle to grid) and projects involving second-life batteries:

“The creation of Renault Energy Services marks an important step forward. Investing in smart grids is key to both reinforcing the lead we enjoy in the European electric vehicle market and accelerating the EV industry’s scale-up.”

One of the first new investments by Renault is acquisition of 25% stake in Jedlix, a Dutch start-up specialising in smart charging.

Jedlix launched its smart charging app for iOS and Android early 2016, connecting over 1,000 public charging stations for all full electric and plugin-hybrid cars. Its partners include Renault, BMW and Tesla.

In partnership with Jedlix, Renault will offer a new smartphone app, Z.E. Smart Charge that enables management of electric vehicle charging and could save you some money.

"In the first achievement of the partnership with Jedlix, Renault is launching Z.E. Smart Charge, a new smartphone app. The app optimises the management of vehicle charges to benefit as much as possible from renewable energy and the lowest prices. Users indicate the charge level they need and the departure time of their car. After supplying the minimum charge requested by the user, the app manages the rest of the charge in smart charging mode.

In addition, Z.E. Smart Charge rewards users financially for being flexible about their charges. Every month, the user receives an amount, which could be equivalent of up to a complete charge.

Z.E. Smart Charge will be available in the Netherlands before the end of the year and will be rolled-out in other European countries in 2018. It can be used on all types of smartphones or tablets with iOS or Android operating systems."

“A pioneer in the electric vehicle market, Renault has confirmed its leadership position by developing innovative partnerships. With Jedlix, we will provide new services to make charging – and thus the use of electric vehicles – even more easy and affordable.”

“Our partnership with Groupe Renault will help us to create the best possible smart charging service and to offer its benefits to a large and diverse customer base throughout Europe.”