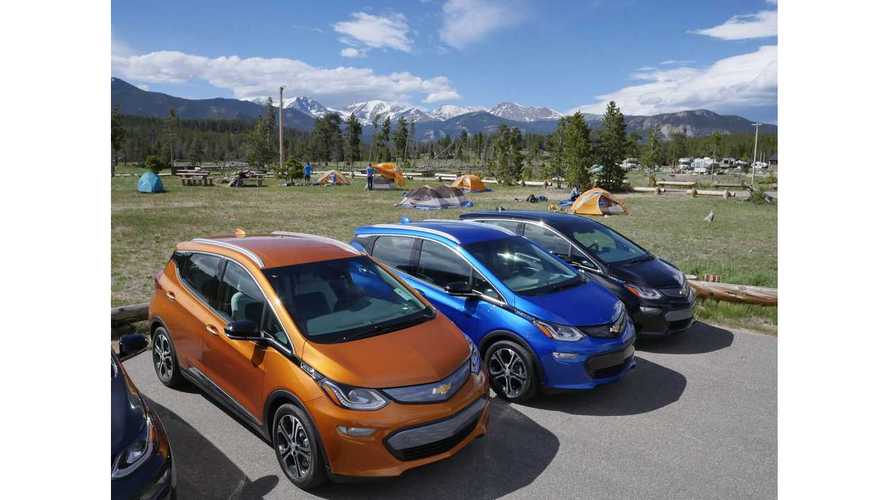 If there was any question whether or not the Chevrolet Bolt EV -- and perhaps one other eventual corporate sibling -- was a one or two and done for GM, this is surely not the case. In fact, the automaker announced last week that it's headed for an electric future with at least 20 new electric models by 2023, the next two arriving in under a year and a half.

Within days of GM's inspiring news, Ford's new CEO, Jim Hackett, publicized his plans. Hackett's plans seem to be more of a "gearing up" effort focused on cost-cutting and streamlining, but in the end, the goal is to set aside money for 13 new electrified* vehicles (which doesn't necessarily mean they will all plug-in...but we know at least 7 will) over the next five years.

Meanwhile, FCA's Sergio Marchionne remains confident something better than electric vehicles will come along. But we digress ...

Analysts have remained reasonably neutral with both Ford and GM stock as of late. It seems Wall Street has been playing a waiting game, wondering if the legacy automakers will choose to step into the future -- especially when considering Tesla's current stock situation -- or play the straight and narrow.

GM stock topped off at new highs every day last week and Ford stock jumped a bit and leveled. Bullish analysts were surely upgrading both automakers' shares and it's yet to be seen how the market will be impacted when more details are divulged and plans begin to take tangible shape. Morgan Stanley analyst, Adam Jonas, shared in a note to investors:

"At this point in the cycle , it is extremely difficult to sustainably push earnings expectations to new highs. We are not surprised to see auto firms spend greater portions of their presentations focused on a thoughtful pivot to Auto 2.0."

Though both automakers released a considerable amount of information last week, there are still missing details. Analysts seemed more content with GM's transparency and hoped that Ford would provide more information. Barclays analyst, Brian Johnson, wrote in a note to clients:

"While the building blocks may be in place, it will take quite some time for benefits to be clear and likely for investors to give credit. Thus for the time being, investor focus on Ford will be around quarterly earnings and '18 guidance — where we don't see much positive surprise."

GM is already ahead of the game with the Chevrolet Bolt EV and its plans include two new models (based on Bolt tech) in the next 18 months (up next is likely an all-electric Buick CUV). The remaining 18+ models will feature an "all-new battery system" and vehicle architecture. GM has yet to disclose more details about the "new EVs", however, the automaker's product chief, Mark Reuss, said:

Self-driving Fusion at Ford's base of autonomous operations in Palo Alto, California

"General Motors believes the future is all-electric. A world free of automotive emissions. These aren't just words in a war of press releases. We are far along in our plan to lead the way to that future world."

Both companies are also already in the process of testing autonomous vehicles. GM acquired Cruise Automation and has a growing fleet of 3rd-generation self-driving Chevrolet Bolts on public roads in San Francisco. The automaker plans to utilize ride-sharing partner, Lyft, to be the first to use self-driving cars in public ride-hailing fleets.

Ford, on the other hand, is aiming to launch a Level 4 self-driving vehicle for the commercial sector by 2021. The automaker has also partnered with Lyft and is currently testing autonomous Ford Fusions.

Automotive News breaks down some of the most significant numbers in the recent press releases:

$14 billion: Amount Ford plans to reduce material and engineering costs through 2022 $7 billion: Product development funding Ford is reallocating from cars to light trucks 20: Number of electric or fuel cell vehicles GM will bring to market by 2023 100%: How much of its U.S. lineup Ford plans to make connected by end of 2019