Everything We Know About The Tesla Semi - Infographics 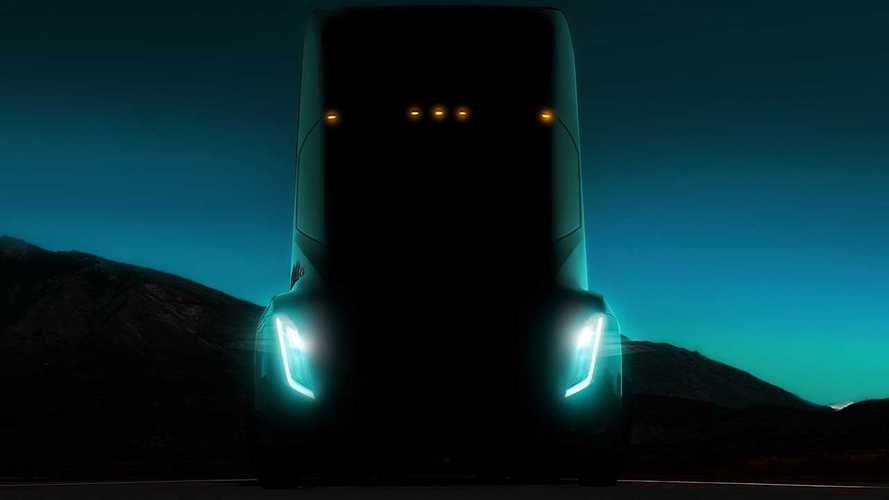 All we’ve seen of the Tesla Semi so far is a couple of tweets from Elon Musk and a portentous picture of a couple of scowling headlights, and quick peak/spyshot at something on a flat bed in the wild that inspired some pretty decent renders.

However, media coverage is already intense, as pundits from the clean-tech world, the trucking industry, and the stock market blogosphere weigh in. The Tesla Semi reveal is surely the most anticipated event in the EV world since Model 3 made its long-awaited debut. Why is this future vehicle generating such a massive level of interest?

Part of the reason surely lies in the potential disruption of one the world’s largest and most strategic industries. As a research note from VC firm Loup Ventures explains, the trucking industry is massive. Trucks haul approximately 70% of the US’s freight by weight (82% by value), burning 54.3 billion gallons of fuel each year to do so. Some 7.3 million people work in the industry - 6% of the entire working population. In 29 of the 50 states, truck driver is the most common profession. Unlike many other major industries, the trucking industry is distributed among many small businesses. As of 2016, there were 1.5 million trucking companies in the country, 97% of which operated fewer than 20 trucks (Sources: American Trucking Association, Trucker Path).

Obviously, any new technology that changes the way truckers do business is going to have huge impacts in many different fields. Tesla is talking about not only electrifying the semi but adding autonomous features as well. Together, fuel and driver compensation make up 65% of the industry’s costs, so saving money on both items could measurably reduce the cost of many of the goods that we buy.

Unlike passenger car drivers, truckers tend to have a very good understanding of their operating costs - in fact, there’s a wealth of statistics available about the trucking industry. An infographic from Truckers Report (see bottom of post) details the various costs involved. In the US, the average operating cost per mile is $1.38, and the average total yearly cost of operating a commercial truck is $180,000. Diesel fuel and driver salaries are by far the biggest expenses, followed by repairs, insurance (there are at least 9 different types of insurance policies for trucks), tires, and a variety of permits, licenses, taxes, and tolls.

And don’t forget the energy-dense liquid that keeps the whole system rolling - the average commercial truck driver spends over $600 a year on coffee (the amount spent on other, less respectable stimulants is unknown).

An electric, autonomous truck could obviously save trucking companies enormous amounts of money, but there’s also a dark side: reduced demand for truck drivers will mean increased unemployment, much of it in already disadvantaged communities. Our good buddies aren’t going to disappear overnight, however. Electric trucking has a number of challenges to overcome, including a lack of suitable charging infrastructure and the inherent conservatism of fleet operators.

On the other hand, the drawback that skeptics tend to focus on - limited range - is far from being a deal-killer. What many observers fail to understand is that a Tesla Semi doesn’t need to match the range of a diesel vehicle to be extremely useful. Almost a third of all trips made by tractor-trailers are less than 200 miles in length. Tesla is well aware of the range requirements of the various segments of the transport market and has been working closely with the trucking industry to design the Tesla Semi.

“ already know that it’s going to meet their needs because they’ve told us what those needs are,” said Elon Musk. “So it’ll really just be a question of scaling volume to make as many as we can.”

Autonomy is potentially even more transformative (and scarier, if you work in the trucking industry) than electrification and, again, even a truck with limited self-driving capabilities could deliver huge gains in convenience, cost savings and safety (semi trucks represent only 1% of total traffic, but are involved in over 10% of fatal accidents). For an autonomous system, driving on an interstate highway is much easier than negotiating city traffic. A truck that could drive itself on the highway would be quite useful, allowing the driver to take a rest for long stretches, taking the controls only when it’s time to leave the highway. Tesla is also experimenting with platooning, a technique by which autonomous trucks closely follow a lead vehicle, improving range.

Tesla’s assault on the freight hauling market is probably going to proceed in stages, beginning with short-haul trucks that make regional deliveries and return to a depot to be charged at night, and later expanding to target longer hauls.

How long all this will take is impossible to predict with any precision, but a new article from McKinsey Energy Insights reports that the electrification of the freight sector is moving faster than expected, and forecasts that e-trucks could account for 15% of global truck sales by 2030, and as much as 25-35% in favorable segments such as urban light-duty trucks in China and Europe.

McKinsey examined 27 segments of the truck market and concluded that the majority of commercial vehicles can reach cost parity with legacy diesel trucks within the next 10 years, assuming that battery cost and power density continue to improve. In some markets, parity has already been reached. The most cost-effective application is likely to be light-duty trucks with short daily routes. This segment is expected to reach cost parity by 2021.

Even once cost parity is attained, a large-scale switch to e-trucks will require a sufficient number of models on the market - as with passenger cars, Tesla can’t do it all alone. McKinsey sees the supply of e-trucks as a likely bottleneck for the next few years. When it comes to charging infrastructure, early adopters will mainly charge their fleets overnight at their own depots. However, once e-trucks become more mainstream, supercharging infrastructure is expected to be rolled out at distribution centers and along major highways.

Tesla is not the only company working to electrify trucks. A recent article from the Cleantech Group examines some of the electric models now on the market or in testing from companies such as Daimler, Navistar, and Volkswagen.

Literally, dozens of startup companies are pursuing the commercial electric vehicle market. Most of them are targeting the lower-hanging fruit: light- and medium-duty urban delivery trucks.

For example, Workhorse is selling electric vans to UPS and FedEx Express. Electrifying the long-haul semi-tractor is a more difficult proposition, but progress is being made by both industry leaders and startups. Cummins, one of the largest builders of diesel engines, recently unveiled a prototype 18,000-pound tractor with a 140 kWh battery pack and has outlined plans to add hybrid and fully electric powertrains to its lineup beginning in 2019. Startup Nikola Motors, named for a certain Serbian-American inventor, recently unveiled an electric semi-truck that incorporates both lithium-ion batteries and a hydrogen fuel cell.