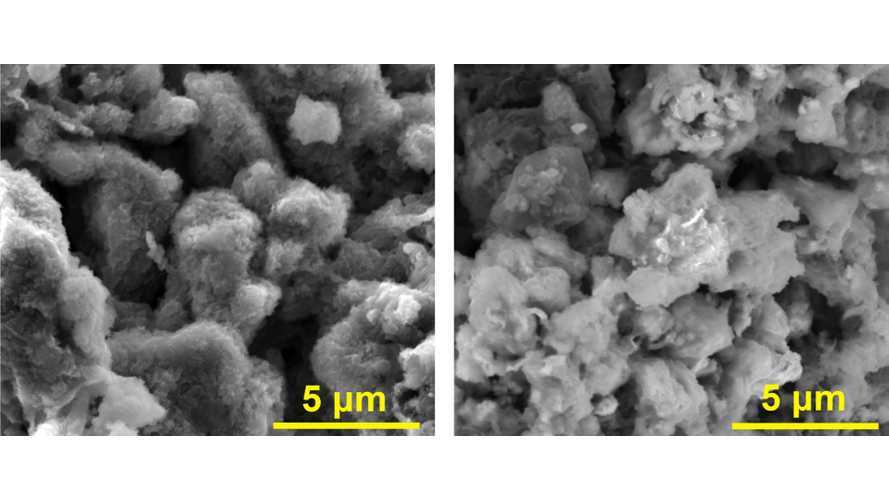 In the electric vehicle world, battery breakthroughs are heralded on the regular, but really, very few of them are even worth their weight in headline space. New chemistries might promise great recharging speed, but lack decent energy density. Some promise terrific energy density, but miss the mark on cycle life (longevity). This recent discovery by boffins at Rice University, specifically, the lab of chemist James Tour, has some pretty solid and exciting numbers, though.

Before we talk about how this chemistry works, which, while interesting, probably won't mean much to non-scientists, let's look at these digits. The big one, the number we generally like to look at first, is energy density. Today, the top commercial automotive cells are in the 300-350 watt-hours per kilogram neighborhood. This so-called "asphalt battery," at 943 Wh/kg, holds as much as triple that, meaning a thousand pound battery might end up being around 350 lbs. Lighter is better, of course, because it brings improvements to range and vehicle dynamics.

Usually, when good energy density is achieved, power output suffers. But according to this paper, which was published in  American Chemical Society journal ACS Nano, this tech is can put out 1,322 watts per kilogram. Now, it doesn't say whether this is a pulsed or continuous output, but either way, it's plenty of power.

Recharging wise, it looks capable of paradigm-changing speed. Think about a 20 times improvement over today's typical cell (and what that would mean for EV uptake in the future.)  Five minute charging? Yes, please. Says Tour,

"The capacity of these batteries is enormous, but what is equally remarkable is that we can bring them from zero charge to full charge in five minutes, rather than the typical two hours or more needed with other batteries."

Similarly, cycle life — how long a cell can retain at least 80 percent of its energy storage capacity after it has been charged and discharged a number of times — seems robust. After 500 cycles, it showed "exceptional stability," and the paper takes pains to point out the formulation prevents the formation of dendrites, which can lead, eventually, to cell destruction of the unwanted fiery kind.

The secret to these cells is gilsonite, a derivative of asphalt, being blended with conductive graphene nanoribbons, which are then coated with lithium metal by means of electrochemical deposition. Also, the lab "combined the anode with a sulfurized-carbon cathode to make full batteries for testing." So simple, am I right?

Although the cells show better potential than just about anything we've seen, there is no mention made of commercialization. We can only imagine things are happening behind the scene, though, so we'll be keeping our ears glued to the ground. If you want a few more technical details about this promising chemistry, hit the link below.